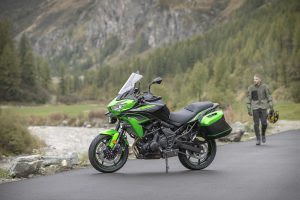 KAWASAKI UK has announced the range of 2023 Versys models, as the immensely popular adventure touring motorcycle is refreshed for the coming model year.

The bike is a hugely popular machine in the UK and Europe, with Visordown running one for the past year as our stalwart and much loved long-termer. For next year, Kawasaki going to be releasing numerous models of both the 650cc and 1,000cc versions of the bike.

Versys 1000, will arrive with three models, each featuring different spec and trim levels and accessories, The standard version comes equipped with Electronic Cruise Control plus Kawasaki KTRC Traction Control, Power Modes and an Assist and Slipper clutch. It also gains the Kawasaki Intelligent ABS as standard.

The Versys 1000 S is a step up safety and support and gets linked Traction Control and Power Modes plus an up/down quick shifter, LED Cornering Lights, a TFT meter panel, heated grips, and hand guards.

The head of the Versys 1000 family is the top-spec SE model, which includes all of the above, also gains trick Showa Skyhook electronically damped suspension.

There is one base platform of the 2023 Versys 650, and as standard, it includes KTRC traction control, LED lighting and Bluetooth connection as standard. The 650 also boasts a brilliant TFT dash and adjustable windscreen even in ‘base’ spec. Alongside this are the Tourer and Grand Tourer Edition models each offering variation in spec, tech and accessories.

The 2023 Versys 1000 will be available from November in Metallic Matte Graphensteel Gray/Metallic Spark Black. Prices start from:

For more information on the full range, head to: www.kawasaki.co.uk