A large tract of restored prairie stretches into the distance at the Kankakee Sandsowned and managed by the Nature Conservancy, I spent five days in and around this northwestern Indiana site at the tail end of June, my third visit here to date. It is an amazing area full of biodiversity, as evidenced by my spending the better part of a week in a preserve that is “only” 8,400 acres. On my prior visits, I only allotted a day or three, and that wasn’t nearly enough time.

John Howard, Laura Hughes, and Linda Romine came over for the first half of this excursion. All are expert field workers with expertise in a wide variety of subjects. We hit insects hard during that time and found lots of notable subjects. We even mothed two of those nights and came up with some moths new to us all. The latter half of my trip, I focused heavily on birds. As the time change meant that what would normally be 6 am to my internal clock was 5 am. That meant a few VERY early mornings to be in position at first light, a necessary evil of chasing birds. But it was well worth it, and I’ll share a few of those species below.

The Kankakee manager is Trevor Edmonson and he is a most helpful fellow. Few conservation organizations manage their holdings with the sophistication of The Nature Conservancy, and Trevor exemplifies this biodiversity-focused management attitude. He and his staff are extremely helpful to visitors, and he even offered his email to those interested in visiting Kankakee: [email protected]

An Indigo Bunting (Passerina cyanea) rests atop a thorny snarl of blackberries between bouts of singing. There are scads of bird photography opportunities here, of species both common – like this one – and not so common, at least to those of us that live to the east.

This Bell’s Vireo (Vireo bellii) spent some time in this thicket singing its charismatic jumbled song. While pretty common at Kankakee – the most frequent vireo in the preserve, along with Warbling Vireo (V, gilvus) – Bell’s Vireo quickly drops off to the east. This is one of the easternmost sites in which Bell’s Vireo is easily found in numbers.

What I said about the vireo above largely applies to Dickcissel (Spiza americana, The little cardinalids are abundant at Kankakee but rapidly decrease in frequency to the east. Their chattered mechanical songs were the dominant part of the avian soundscape in most spots that I visited. In this shot, a Dickcissel sings from the emergent stalk of a Compass Plant (Silphium laciniatum), a giant prairie sunflower. The plant is at its eastern range limit here.

An adult male Orchard Oriole (Ictorus spurius) strikes a pose in a Rattlesnake-master (Eryngium yuccifolium, This species is far more common at Kankakee Sands than its better-known brethren, the Baltimore Oriole (I, galbula, Orchard Orioles frequent open country interspersed with scattered trees and shrubby copses, and the males’ loud whistled songs, often ending on an upslurred note, give them away. This bird was mated and had a nest nearby. Interesting but by no means unique was the presence of a “helper” – a first-year male. I’ve probably seen this a half-dozen times. The young male will assist with the feeding of chicks and seems to be completely accepted by his elders.

Eastern Kingbirds (tyrannus tyrannus) are very common at Kankakee, but nonetheless I was quite pleased to find an active nest about 20 feet up in a scrubby oak. The parents were simply feeding an unknown number of chicks. I staked myself in good light and attempted to photograph the powerful flycatchers as they returned with food for the young. This bird is sallying after a Rose Chafer Beetle (I think, they were common) and a split second after I made this image, the beetle was caught. It was promptly taken to the nest and fed to a chick.

A Northern Bobwhite (Colinus virginianus) sings on a distant fence post. As an aside, this is part of the fence that hems in a massive pasture, in which a herd of about 100 Bison range in. They look quite at home on this great plain.

Bobwhite have pretty much vanished in my region (Ohio), victims of a large-scale shift to industrial agriculture and the attendant annihilation of habitat. They’re easy to find at Kankakee and I heard the iconic whistles of the little quail in many areas. 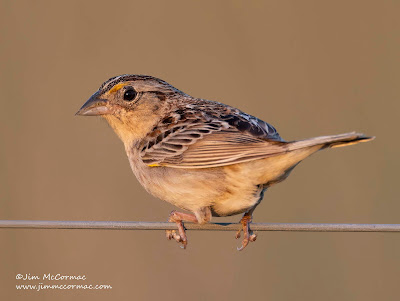 If you like sparrows – and who doesn’t! – Kankakee Sands is the place for you. A Grasshopper Sparrow (Ammodramus savannarum) perches on a fence row, a very common singing spot for the grassland species. This might be the most common nesting sparrow here but is by no means the only species. Stablemates include Eastern Towhee (Pipilo erythropthalmus), Chipping Sparrow (spizella passerina), Field Sparrow (spizella pusilla), Vesper Sparrow (Poocetes gramineus), Lark Sparrow (Chondestes grammacus), Savannah Sparrow (Passerculus sandwichensis), Henslow’s Sparrow (Centronyx henslowii – VERY common), Song Sparrow (Melospiza melodia), and Swamp Sparrow (Melospiza geaorgiana,

Ten species of breeding sparrows! Include migrant and wintering species, and the Kankakee sparrow list balloons to about 19 species! In all, over 240 species of birds have been documented at Kankakee Sands.