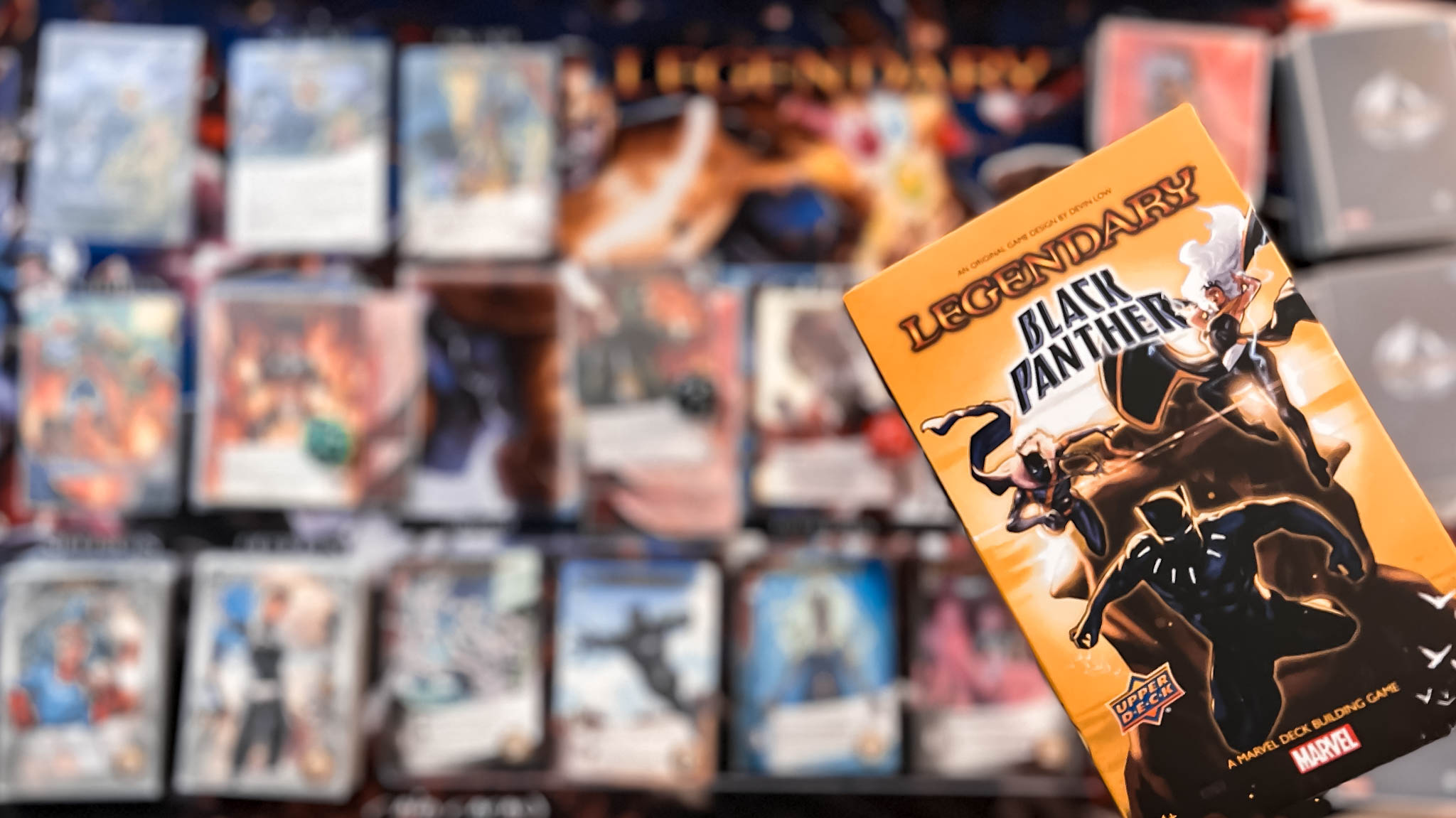 We’re diving into the new Black Panther Marvel Legendary expansion! This expansion highlights the heroes and villains of Wakanda. We’ll examine what new challenges you’ll face with Black Panther and whether we think it’s worth taking the expansion.

The following review will assume that you have a basic understanding of Marvel Legendary. If unfamiliar, check out this post for an overview of the game.

Black Panther is an expansion with 100 new cards in the form of 5 new heroes, 2 masterminds and 2 villain groups.

The new heroes in this set are King Black Panther, Queen Storm of Wakanda, General Okoye, Princess Shuri and White Wolf. Black Panther and Storm are returning for the third time and the other three are playable for the first time in Marvel Legendary.

My favorite hero to use in the set is Princess Shuri. Shuri’s cards are balanced with equal amounts of recruit and attack. Her card lets her take advantage of the featured keyword Empowered, which is about manipulating HQ.

Other character card effects are nicely themed and match each hero’s powers. King Black Panther and Queen Storm use keywords in favor of the throne. General Okoye is about to take wounds after sacrificing them for powerful effects. And White Wolf’s cards revolve around adding permanent wounds to the villain or mastermind that remain round to round.

Overall, the hero class/keyword specifically corresponds to the character’s strength in this expansion.

The nice feature of Black Panther is that there are no new keywords to learn. Instead, Upper Deck transformed existing ones into new and interesting effects. For example, ambush is a keyword that has been around for the first set for villains’ decks, now that the word appears on hero cards.

When a hero with an ambush effect enters HQ, players can gain an advantage if they have the required hero class on hand. We have mixed feelings about the use of ambush effects on heroes. It’s a one-time effect that’s easy to miss and it can be difficult to build a team that actually uses the effect well. It’s also hard to track down when playing a two-handed solo, my favorite way to play solo.

Other keywords were introduced in both previous expansions; Occupied (ant-man) and favor of the throne (the realm of kings).

I like Throne’s favor keyword better for the theme than the gameplay. I found it hard to trigger its effect in the games I played because I never got the throne in the first place or someone else would take it before activating it. Ultimately, the effect never felt powerful enough to try to build around it.

I really liked the empowered keyword which is used by both the Heroes in Villains. I enjoy thinking about how to modify HQ to weaken villains or boost your heroes. The strong keyword works great with multiclass heroes, which are a lot in this set. This power has one major drawback: it can create an ever-changing shift of attack values ​​for heroes and villains that can be difficult to track.

There are two new masterminds in this expansion, Claw and Killmonger. These were the obvious and best choices when thinking about the Black Panther focused mastermind.

Claw and his villainous group, the enemies of Wakanda, all have strong keywords to add variable strength to their base attack. As mentioned earlier, I enjoyed this keyword with heroes. With the baddies, we had to use d20s to track down their true strength. Without them it was impossible to keep everything straight at a quick glance.

Killmonger and his villainous group, the Killmongers League, cannot be defeated unless their base attack is at zero. You reduce the attack by your heroes by attacking them at full base value. This will give you a small bounty and add a wound to the villain. You must keep attacking the villain until his base value drops to zero. This means that while a Killmonger only has 5 power to defeat at full health, it requires a cumulative 15 attack to defeat a Mastermind Tactic card.

It’s interesting to injure the villain. I enjoy that the ambush effect on Baron Maccabe and Venom requires players to sacrifice victory points/hands to heal wounds. I enjoy that I can wear a mastermind down multiple hands instead of requiring a massive takedown turn. However, in games with Killmonger and Killmongers League, I got tired of fighting the same thing over and over again for little reward and adding wounds to the card would crowd the playing space. I’m a fan of adding a wound keyword because it created interesting effects, but don’t enjoy baddies that require you to reduce their attack to zero before fighting. I enjoyed it thematically for Mastermind.

Like all recent expansions, each Mastermind comes with an epic version that increases the Mastermind base attack value and increases the negative effect of their Master Strike. Epic Masterminds is great because it’s like getting an extra challenge mode for players looking for that experience.

If you are new to Legendary Black Panther is not an expansion I would recommend. This adds a lot of booking keeping and influence across different locations. Overall it can slow down the pace of the game. The amount of math and adjustments each card needs to know what their constantly changing attack values ​​can be tough.

The new elements added to the game are a remix of what was done in other expansions to varying degrees of success. The plans are fine but not so much fun that I would play them outside of a themed Wakanda game. They are well designed for the Black Panther theme, not our favorite for the general game.

However, if you’re a big fan of Black Panther there’s still a lot to get excited about in this expansion. Princess Shuri and Queen Storm are great characters and I will be adding them to other decks often. Add a Wound The key word is a fun, new hero/villain power. The character powers are well themed and will help heal your Black Panther itch while you wait for the sequel.

pick up a copy of Black Panther Marvel Legendary Expansion.
Add this and all our favorite Legendary expansions to our . search on Amazon Storefront.

We’re giving away a playmate for Marvel Legendary! Many thanks to our friends on Upper Deck for partnering with us on this! go to instagram Find out how to enter!

Need a great playwright but missed the giveaway?
You can pick one up here: X-Men Mat, Thanos Mato

special thanks to our friends Upper Deck Entertainment For sending us a copy of Black Panther to review and sponsor this giveaway gift. As always, our thoughts and opinions are our own.