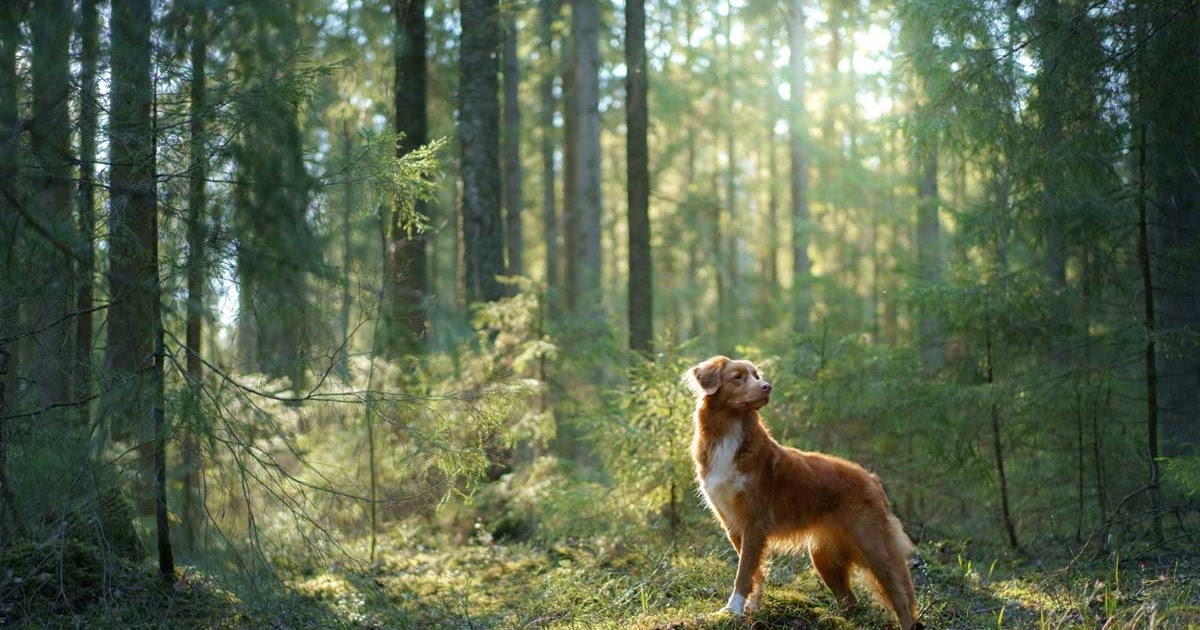 We already know that dogs have amazing noses, but it seems they can also use magnetoreception to help them find their way.

Every now and then, there’s a story of a dog finding their way back home from somewhere a long distance away. Of course scent is very important to dogs, so following a familiar smell is one way they might find their way back to family and home. But are there other ways too? Is it possible that dogs can detect magnetic fields and use them to find their way?

It’s not a completely out-there idea, because birds are thought to use the Earth’s magnetic field to navigate during long migrations. And several types of mammal—including red foxes, roe deer, and cattle—are thought to be able to detect magnetic fields.

There’s some evidence from mammals’ eyes. A type of light receptor, called cryptochrome 1, is thought to be important in birds’ detection of magnetic fields. Research has found that this receptor is present in the eye of mustelids (like ferrets and badgers), bears, and—you guessed it—canids like the domestic dog (Nießner et al 2016). It wasn’t found in a number of other species examined, including mice and cats.

But there’s a lot of uncertainty about what this receptor actually does. What if we look to dogs’ behavior for some ideas on their response to magnetic fields?

Some years back, a widely-publicized study shed some light on this by reporting that dogs prefer to poop in line along the North-South axis, although they might face either North or South (Hart et al 2013). As well, they reported that female dogs align with this axis to pee, but male dogs do not. The scientists who did this study hypothesized that this sex difference has to do with the manner of urination (squatting vs lifting a leg).

The Earth’s magnetic field has a lot of variation, and this study reported that the alignment only happened at times when the magnetic field was stable, not when it was fluctuating. Dogs took part in different locations in Germany and the Czech Republic.

But it’s not so simple, because a more recent study that looked at dogs peeing and pooping in five parks in Lyon, France, found no evidence of them lining up with the magnetic field (Rouviere and Ruxton, 2021). The scientists who did this research tried to replicate the previous study, except that the measurements were taken by scientists, whereas the other study related on observations from dog guardians.

In both of these studies, the dogs were off-leash and free to move as they wished. Rouviere and Ruxton say that the layout of the park may affect how dogs move around in it. So it’s very interesting to see that one study has tested whether dogs can use the Earth’s magnetic field to navigate (Benediktová et al 2020). The researchers looked at how hunting dogs found their owners again after the owner waited until the dog had wandered off a bit, and then hid behind a tree.

The dogs were given GPS tracking collars and taken for a walk in a forest that was set up with cameras. Meanwhile the owner was able to record their location with GPS, and the scientists took measurements of the dog’s route and of the magnetic field between dog and owner.

Hunting dogs were chosen because they are bred to go chasing after game and then return, and 10 different breeds, including miniature Dachshund and fox terrier, took part.

The scientists said there are two main approaches the dogs could take to return to their hiding owner. Either they could return via the same route they had taken out, using scent and tracking their way back. Or they could try scouting, navigating their way back across the landscape.

“While tracking may be safe, it is lengthy,” say the scientists. “Scouting enables taking shortcuts and might be faster but requires navigation capability and, because of possible errors, is risky.”

Tracking was the most common approach, taken by 59% of dogs; 33% used scouting; and the remaining 8% used a combination. Dogs who used scouting were quicker. These dogs took a short run that was aligned along a North-South axis, which the scientists called a ‘compass run’, before turning towards their guardian.

A statistical analysis showed that the alignment of this compass run was always North-South, regardless of where the guardian was.

The scientists tried to take account of wind and sun, which might also affect behaviour. This study suggests that dogs, like birds and some other animals, have a homing instinct that lets them use the magnetic field to navigate.

Although more research is needed, maybe this can explain those rare cases of dogs who find their way home over great distances.

But dogs don’t always find their way home after being lost elsewhere, and even when found they have not necessarily gone far from where they were lost. So a microchip remains an important way to help dogs get reconnected to their family!

If you like this post, check out my book Wag: The Science of Making Your Dog Happy

, Modern Dog calls it “The must-have guide to improving your dog’s life.”