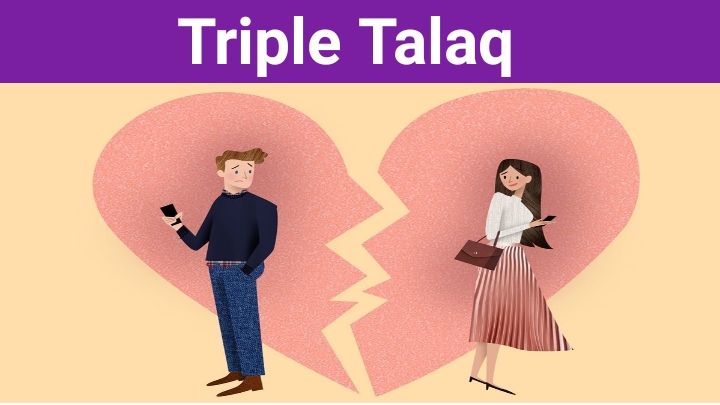 Every married couple surely wants their house to run amicably and last till death. However, often the problems between the couples become a reason for domestic disputes. In fact, there are few who ended their marriage with triple talaq.

Meaning and types of divorce

In linguistic terms, divorce means breaking the bond. In other words, divorce is the separation of the relationship between husband and wife from the legal bond of marriage according to religious law. However, Islam allows reconciliation after the husband divorces his wife, but with some notes.

Actually, divorce is the right of the husband, which means that the wife cannot break the bond of marriage if not imposed by the husband. However, it is not fair for the husband to exercise his rights arbitrarily and hastily in deciding triple talaq. Especially if he only follows his lust. Divorce is no joke either. When the husband declares the divorce outright, even if the condition is joking, the divorce falls on the wife.

divorce give another divorce

The Law of Divorce One and Divorce Two is explained in Quranic Surah al-Baqarah verse 229, which reads:

In other words, the divorce which is allowed to be reconciled and reconciled to be husband and wife can be done only 2 times. Therefore, if the husband leaves one divorce or two divorces. There can be reconciliation between he and his wife as long as the wife is in the period of iddat. However, if the period of Iddah has expired. Then it is not allowed to refer back. If you want to get back together. Then you have to get married. This first talaq and second talaq are known as Raji talaq.

Now, what is the meaning of iddat period? It is a waiting period in which a woman who has been divorced by her husband. Her husband died or divorced while her husband was alive, abstains from marrying any other man. The duration of iddat for women varies depending on their respective conditions.

There are many benefits of iddat period, know. One of them provides an opportunity for husbands who have abandoned another two divorces to reconcile with their wives.

The law of triple talaq is explained in Quran Surah al-Baqarah verse 230, which reads:

“So if a husband divorces his wife thrice. Then it is not proper for him to marry her until she marries another man and then she is divorced. Then their It is permissible for them to meet again. As long as they feel that they are able to maintain the limits of Allah. These are the limits set by Allah, which He makes clear to the wise”.

The thing is that when the husband has given triple talaq to his wife. Then the husband is not allowed to reconcile with his wife. Both of them can remarry on the condition that the wife has remarried to another man and lived the life of husband and wife, then divorced.

If the period of iddat has expired, the first husband can remarry his wife with a new marriage contract. This triple talaq is known as talaq by kubra. But keep in mind that this marriage should not be done by manipulation. For example, there is a situation where the husband first pays a man to marry his ex-wife and then divorces her. With the intention that he can remarry his ex-wife, it is not proper in Islamic law.

After knowing the meaning of triple talaq. Now I will discuss the types of divorce. As is known, there are different types of divorce, that is, depending on his words and seen from the offender.

Divorce according to their words

When viewed on the basis of pronunciation or speech. Talaq is divided into 2 types, namely Shariat Talaq and Kinaya Talaq. Here’s the explanation:

It is a talaq recited by a husband to his wife with a clear accent or speech. For example, sentences like “I divorce you”. Even if this divorce is said without any intention or in a joking situation. The husband is believed to have divorced his wife even now.

It means divorce which is spoken indirectly by the husband. But in reality the meaning of divorce is contained. The word divorce can fall if with intent. For example, a husband who tells his wife “go back to your parents’ house”. If the punishment is meant to satirize his wife with intent to divorce. Then divorce ensues. But if there is no intention, then there is no divorce.

other types of divorce

A divorce in which the husband declares to his wife one or two divorces. The husband can reconcile with his wife as long as the wife is in the period of iddat. However, if the period of iddat has expired, it is no longer allowed to be referred back. If you want to get back together, you will have to renegotiate the marriage contract.

It is a type of talaq in which the husband gives triple talaq to his wife. In this case the husband is not allowed to reconcile with his wife. A husband can remarry his wife on the condition that the wife has remarried to someone else. Then got divorced. If the period of iddat has expired, the first husband can remarry his wife with a new marriage.

In this talaq, the husband waives the divorce when his wife is in a menstruating state and has not had sexual intercourse. If the wife is menstruating. Then he should wait until his wife becomes holy and they do not have sex during that holy period.

In this case the husband divorces when his wife is menstruating or in a pious state. But before that there was a relationship between his husband and wife. Such divorce is not allowed in Islam and the offender is a sinner.

That is, the filing of divorce granted by the wife to her husband without any compensation to her husband. Fasakh can be done if the husband has violated his obligations in the house. For example, not giving good or mental support to your wife for 6 consecutive months. Leaving his wife uninformed for 4 years, or the husband has behaved badly and the safety of his wife is at risk.

It is a process of divorce at the request of the wife. And the husband agrees on the condition that the wife compensates her husband. Thus, as long as his wife is in the period of iddat, the husband’s right of reconciliation is lost. If you want to get back together nikkaho The process must be done again.

This is the complete explanation of the triple talaq law in Islam. However, couples are allowed to reconcile even after the husband has handed over the first and second talaq to his wife. This does not mean that divorce is supposed to be a joke.