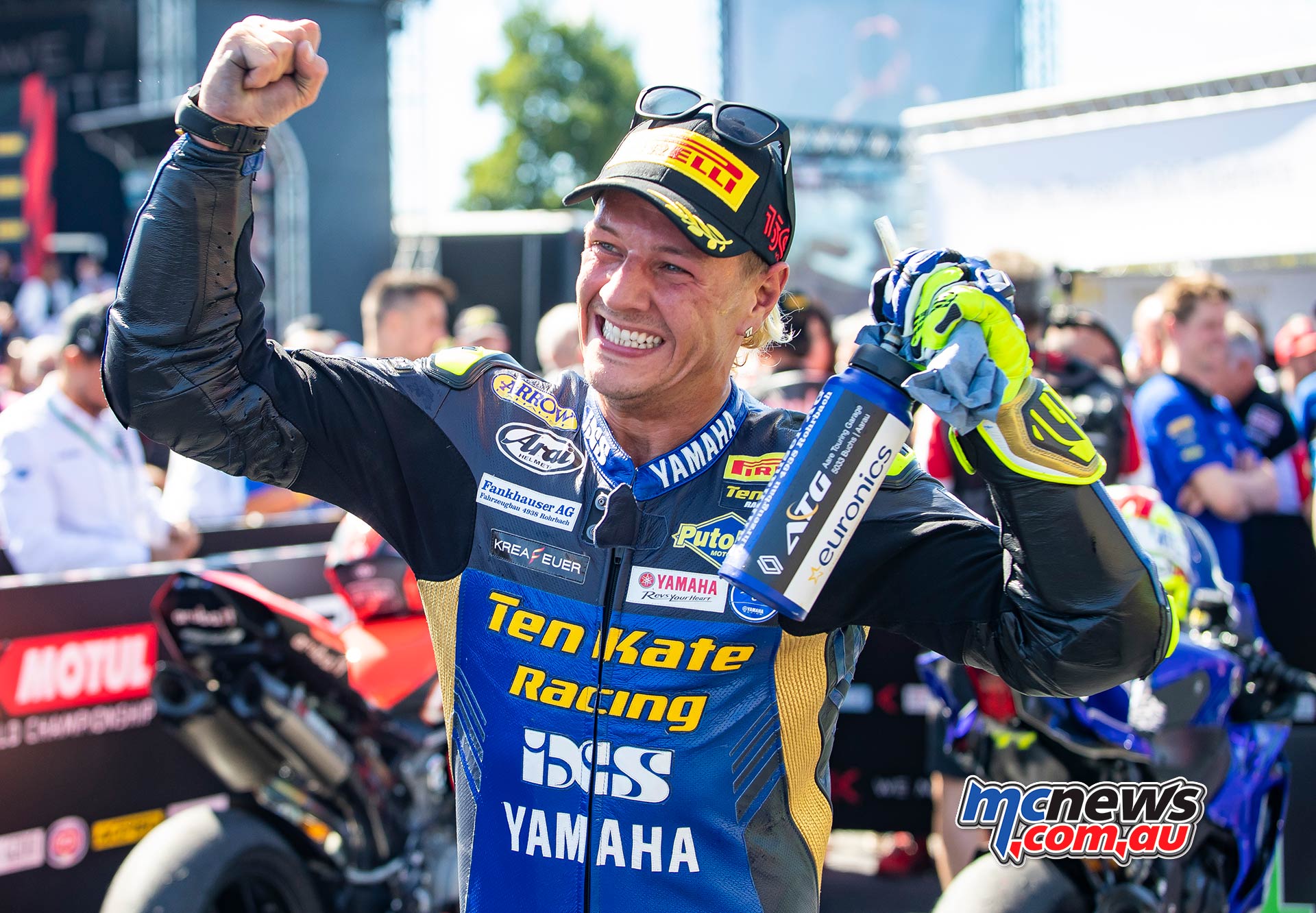 Yamaha Motor Europe is delighted to announce that reigning FIM Supersport World Champion and current series leader Dominque Aegerter will step up to the FIM Superbike World Championship with Yamaha for the 2023 season.

Aegerter enjoyed an utterly dominant maiden campaign in the WorldSSP class last year and has continued to be the rider to beat aboard his Yamaha R6 in 2022. Since his arrival in the WorldSBK paddock, the Swiss rider has demonstrated relentless pace and consistency, while his work ethic and commitment make him the perfect fit for Yamaha’s WorldSBK line-up next year.

Alongside this, Aegerter brings a wealth of experience, having made his debut on the world stage back in 2006 with two wildcard 125cc World Championship appearances at Estoril and Valencia. Over the next few years, he became a regular top 10 finisher and stepped up to Moto2 in 2010.

His maiden podium came a year later in the Valencia final, with Aegerter going on to score sixth further rostrums, including a stunning victory at the German Grand Prix in 2014. ‘Domi’ twice finished fifth in the Moto2 World Championship standings, and in 2020 he joined the MotoE World Cup grid.

Aegerter demonstrated his ability to adapt quickly to new machinery, finishing third in the standings that year. Then, in 2021, he debuted in the WorldSBK paddock, riding for the Ten Kate Yamaha WorldSSP Supported Team in the intermediate class.

Despite having to switch between the MotoE bike and Yamaha R6 throughout the season, Aegerter enjoyed a superb rookie WorldSSP campaign, claiming 10 victories and 15 podiums on his way to the world championship title.

After also finishing second in MotoE that year, Aegerter made another step forwards in 2022, claiming the title in the MotoGP support class with three wins and 10 podiums. The 31-year-old has continued to star in WorldSSP as well this season and currently leads the championship with 12 victories from 16 races.

Aegerter will race a Yamaha R1 WorldSBK alongside the recently announced Remy Gardner for the GYTR GRT Yamaha WorldSBK Team in 2023.

,Ever since he entered the paddock, Dominique has shown that he is one of the top talents, and it was clear from very early on that he was ready for his WorldSBK chance. Unfortunately, there wasn’t an opportunity to give him that chance in 2022, but when a seat became available for 2023 then Dominique was the obvious choice to fill it.

“Not only has he impressed with his pace, race craft and consistency, but he’s also shown the determination and drive needed to be competitive at this level. He’s shown throughout his career that he’s able to adapt very quickly to new machinery, and we’re sure that this ability will pay dividends for him when he steps up to race the Yamaha R1 WorldSBK next season.

“We’re very much looking forward to seeing what he can do. I’d also like to thank Kohta Nozane for his contribution over the past two seasons. He faced many challenges in WorldSBK, but he did so with a positive attitude always. We wish him all the best for the future,

,I’m super happy to join Yamaha in the WorldSBK championship next season. It is a great opportunity for me, and a fantastic reward for the world championship title last year and for leading the WorldSSP series this year.

“I’m looking forward to riding for the GYTR GRT Yamaha WorldSBK Team, and racing alongside Remy Gardner who, as a former Moto2 world champion and current MotoGP rider, will be a strong teammate.

“I can’t wait for the first test aboard the Yamaha R1 as it’s clearly a competitive bike, with Toprak racing it to the world championship last year and in the title hunt once again this season. I am happy to have this opportunity, and I want to thank Yamaha and the GYTR GRT Yamaha team for believing in me. I will give it everything I have next season, but for now my focus is on securing a second successive world title in WorldSSP.,