Minoru Kawasaki is one of the most fun and entertaining Japanese filmmakers and his movies tend to be under-seen and underrated. He’s been in the business for a long time, starting out with small budget fan films, then graduating to working on Ultraman Tiga, He then transitioned to filmmaking in the early ’00s. The first film I saw from him was The Calamari Wrestler (2004) and I was hooked on its mixture of serious themes and preposterous visuals, and he has continued to explore these ideas in his subsequent works. This is just a small sampling of his filmography, and I highly recommend exploring his entire filmography (which admittedly can be hard as only some of them have physical releases).

Tamura is an average hardworking salaryman, toiling away in the office at a pickle distribution company. He works late every night and spends what little free time he has with his girlfriend Yoko. Sounds normal, boring even…except Tamura is a giant koala! One fateful evening, Tamura’s girlfriend turns up dead and he is the prime suspect. Does it have something to do with the mysterious disappearance of his wife three years prior?

The entire film is built off of the contrast between the surreal visual of a man-sized koala and the fact that nobody (except one person as a throwaway joke) acknowledges it as weird. For the first half of the narrative everything is played completely straight as a psychological thriller–Tamura seems to have lost parts of his memories and is plagued by disturbing visions and dreams. He harbors repressed violent urges and he is constantly anxious that he might hurt the ones he cares about. This is also simultaneously hilarious as all of this is acted out by a koala in a business suit, it’s completely absurd. 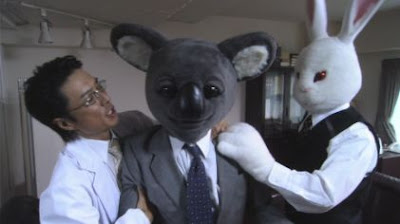 About halfway through the film there is a major tone shift that might turn some viewers off, but it’s a testament to Kawasaki’s deft control that it is executed just as well as the first half. The actor in the koala suit is fantastic at conveying emotion physically as the koala mask is only able to blink its eyes and move the mouth a small bit (which makes it even funnier, honestly). The movie starts going off the rails a bit towards the end in the best kind of way, even momentarily turning into a musical!

Oftentimes people write off films like this as “Oh Japan, you so crazy!” but everything in Executive Koala is done with purpose and intent. It’s a sharp satire of salaryman culture, a dark comedy, and Kafkaesque horror film all rolled into one.

Outer Man is a direct send-up of the Ultraman series and asks the question: what if an Ultraman-like being was real and had evil intentions?

The narrative opens up by the following three actors from different seasons of the Outer Man series, a show that has been running for 50 years and is currently in the Heisei era. They are enjoying moderate popularity, but have varying reactions to their fandom. Interestingly, all three actors have starred in various tokusatsu shows in real life, so it adds an element of meta to the narrative. Their lives are disrupted when a real-life giant Outer Man arrives on the earth with nebulous intentions. Since he is the hero of the show the populace instantly trusts him but it seems there is more going on under the surface. 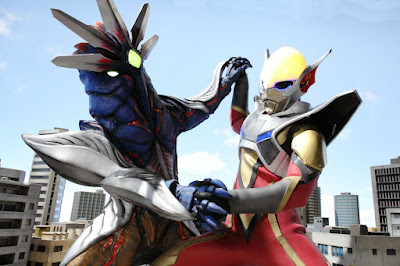 Outer Man as a film structurally wears a lot of hats, it functions as satire, a love/letter, and a subversion simultaneously. It explores the idea that pop culture can infiltrate people’s minds and influence them to think a certain way and even if they are presented with evidence of the contrary they might not accept the truth. Hero worship can be dangerous if it blinds someone to their real intentions, and we see that every day with celebrity worship.

One of Outer Man’s enemies, an enormous insect looking creature named Sylvie Seijin, turns out to be the true hero of the day, setting in motion a compelling underdog aspect. There are also a lot of tongue-in-cheek references to fandom in general, and their undying love and obsession with their chosen property. Outer Man and Sylvie were designed by Hiroshi Maruyama, the Heisei Ultraman/Kaiju designer and the fight scenes are well shot and a blast to watch. The story feels a lot more cohesive and grounded than some of Kawasaki’s other films and there are some genuinely hilarious moments.

Kaiju Mono has a lot on its plate, which is par for the course with a Kawasaki joint. After a volcano erupts in Japan it spews out a giant monster that starts ravaging the city and snacking on the population. The Japanese government is backed into a corner trying to fight it so they enlist the help of Dr. Saigo (Ryu Manatsu) and his daughter Miwa (Miki Kawanishi) of the Institute of Super Physics and Chemistry. They have developed a super serum dubbed Setup X that can imbue a human with the power to grow to massive proportions. Dr. Saigon’s assistant Hideto Nitta (Syuusuke Saito) is the unlikely volunteer to test the serum. Will he be able to defeat the creature and win the love of Miwa? 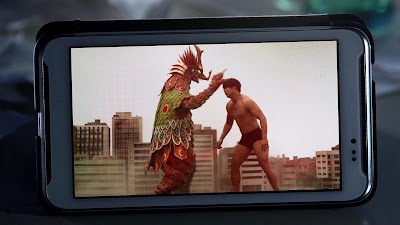 The most interesting aspect of the story is after Nitta gets the shot he changes into a gargantuan muscular man who is played by Kota Ibushi, a professional wrestler in real life. Ibushi definitely isn’t the greatest actor, though his awkwardness is quite endearing at times. However, the second the action heats up and he battles the titular Kaiju Mono, all that hesitation fades away and he is intimidating and agile as he beats the living hell out of Mono with his wrestling moves. You haven’t lived until you have seen Ibushi dive off the top of a skyscraper to elbow drop a kaiju. When Nitta powers up a second time his next form is played by Minoru Suzuki, another infamous wrestler. Suzuki is known as a brutal fighter and it’s a fun little Easter egg that he is referred to as Evil Nitta.

The special effects are mostly practical with adorable little models and a guy in a rubber suit. The suit is fantastic looking with lots of detail and love put into it. It’s both a parody of tokusatsu films and a love letter to them, and there’s always something goofy going on in the background. Some of the side plots don’t quite gel with the main narrative and that causes it to drag a bit in the middle. While it’s not the main focus, the film touches a bit on society’s perception of what constitutes masculinity and how it can effect men’s self-esteem—after Nitta transforms he keeps the muscular frame and his life is drastically different than it was when he was skinny and timid.

Overall, Kaiju Mono is a lightweight affair, nothing groundbreaking, but entertaining nonetheless.