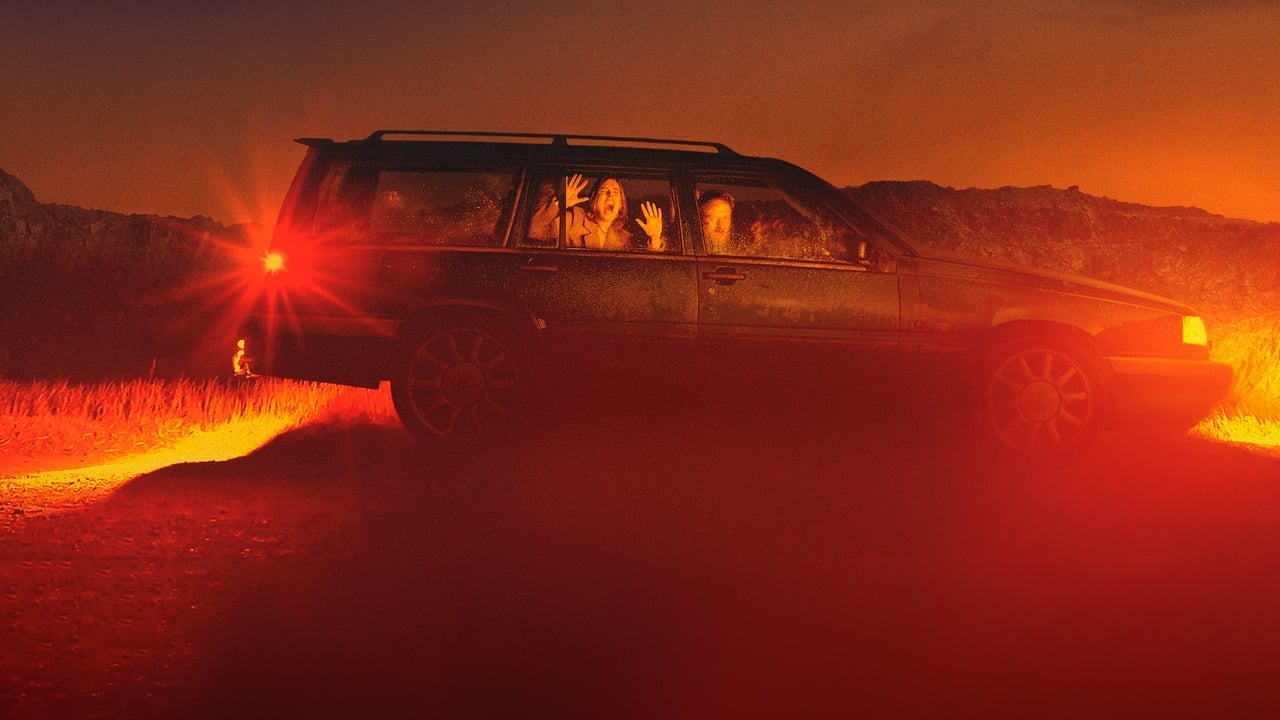 25 years ago, Austrian filmmaker Michael Haneke mightily pissed off some horror-loving cinephiles of my acquaintance with a nasty piece of work called Funny Games. (Just to pour salt in the wound, Haneke remade it almost shot-for-shot a decade later, in English, enticing the unwary with stars Naomi Watts and Tim Roth.) Everyone agreed that it was expertly made and brutally effective; what rankled some folks was the film’s rhetorical gambit, which was basically to strip the genre of everything conventionally entertaining and play some winking meta-games designed to implicitly rebuke every viewer who doesn’t walk out in disgust. “This is truly horrible,” Funny Games says of the nightmare it serves up. “Why would you want to watch it?” I kinda love both versions (they’re really almost identical, though the original has much stronger motiveless evildoers), myself—that is, if you can “love” something that makes you nauseous—but I understand why others take umbrage at Haneke’s judgmental sneering, and argue, in their own defense, that the sick-fun aspects he pointedly elided are intrinsic to horror’s appeal. And I now wonder what those people will make of the new slow-burn Danish horror film* Speak No Evil, which more or less imagines what Funny Games might look like if you retained the grim hopelessness but put all of those audience-pleasing elements back.

Directed by Christian Tafdrup—apparently a well-known actor in Denmark; this is his third feature, but the first to get a US release—and written with his brother, Mads, Speak No Evil waits considerably longer than Haneke did before revealing its ugly endgame. Sune Kølster’s atonal symphonic score, however, announces very early on that things are not going to go well for married couple Louise (Sidsel Siem Koch) and Bjørn (Morten Burian), who we first meet vacationing in Tuscany with their pre-teen daughter, Agnes (Liva Forsberg). While there, they become friendly with a Dutch** couple of roughly the same age, though not so chummy that they aren’t surprised, some indeterminate time later, back home, to be invited to spend the weekend at that family’s home in the Netherlands. It’s only about an eight-hour drive away, they figure, and the other couple was really very nice, so why not? “What’s the worst that could happen?” asks Bjørn—a question that we know, from the title (though the original Danish title translates simply as Guests) and the genre and that ominous music and an opening, as-yet-unexplained shot of car headlights barely illuminating a very dark country road, will eventually be answered in potentially stomach-churning detail.

For a good long while, though, Tafdrup keeps the uneasiness on a low simmer. Patrick (Fedja van Huêt) and Karin (Karina Smulders) are genial hosts, and it’s easy enough for Louise to assume, when Patrick insists that she try some of the wild boar he’s cooked, that he doesn’t recall a meal in Tuscany during which they discussed her being a vegetarian (or a pescetarian, technically—she does eat fish). Still, there’s something off-putting about the brusque way that Patrick treats their oddly mute young son, Abel (Marius Damslev), and about Karin and Patrick sloppily making out and pawing each other while slow-dancing at a local roadhouse, and about Patrick manipulating Bjørn into picking up the sizable check for their night out together. Tafdrup achieves a lot with very little, at times: one especially creepy moment involves nothing more than a temporarily obstructed light source and the sound of teeth being brushed getting marginally louder, as Karin stands naked in the shower listening to someone else—clearly not Bjørn —who’s casually walked into the bathroom and silently began their nightly ablutions, seemingly moving closer to the shower curtain for a moment before retreating and exiting. Nothing’s ever overt, but everything’s off.

That’s a big part of what makes Speak No Evil‘s first hour, in particular, so masterfully unsettling. We’ve seen this sort of “dangerous or just weird?” dynamic plenty of times before, but the Tafdrups concoct a plausible explanation for the age-old horror-film query: Why don’t they just leave? Louise very much wants to, at one point, but winds up forced to explain why, and her reasons all sound rather feeble when spoken aloud, even though our own nerves have been jangling for some time. What’s more, Patrick and Karin have rational responses to each objection, making their fleeing guests feel even more guilty. Van Huêt deserves much of the credit for pulling this off, giving Patrick an ingratiating warmth and exuberance that’s only occasionally, at first, inflected with hints of carefully controlled hostility. Even when Abel, who rarely speaks, approaches Bjørn alone early on and opens his mouth to reveal that it lacks most of a tongue, Patrick successfully allays any concerns by casually mentioning, a bit later, that his son suffers from congenital aglossia, a condition in which the tongue fails to fully develop. This somewhat contradicts what he said in Tuscany—that Abel clams up around strangers, out of shyness—but pointing that out would entail direct confrontation bordering on rudeness, and Bjørn, especially, isn’t someone who’s inclined to rock rickety boats.

Indeed, it’s mostly Bjørn who’s responsible for this whole…“predicament” seems awfully benign, considering where things end up, but let’s go with that anyway. One of the film’s very Haneke-esque touches is that it keeps tendering and then withdrawing opportunities for our protagonists to escape their bleak fate, and it’s Bjørn’s vanity that’s generally the problem; in Tuscany, Agnes loses her beloved stuffed bunny, and Bjørn searches every tourist trap they’d visited that day to find where she left it…and then takes it way too much to heart when Patrick, upon hearing of this quest, sincerely calls it “very heroic.” While the Tafdrups shrewdly decline to make it explicit, this unexpected compliment is almost certainly instrumental in pushing Bjørn to accept Patrick and Karin’s invitation, despite Louise’s quite sensible reservations. (“It’s perhaps a bit too long to spend with some people we barely know.”) And it’s the memory of this “heroism,” and the desire to recapture it, that sees Bjørn return his family to the lion’s den after they’d made their way to safety. Toward the end, when circumstances have turned truly fucking dire, Tafdrup taunts us by visually suggesting an opportunity for actual heroism, only to let the moment pass. (He and Mads also come up with one of the only genuinely clever riffs to date on modern horror films’ lazy solution to the narratively troublesome ubiquity of cell phones with which victims could call for help: “Damn, there’s no signal out here.” Careful what you wish for.)

All of that said, Speak No Evil‘s ghastly grand finale is what most viewers will remember most vividly and discuss most animatedly afterwards. I respect the uncompromising bleakness (which again recalls Funny Games), but it’s the film’s weakest facet by far. Partly, that’s because of certain choices Tafdrup makes that seem like vague allusions to real-life atrocities; he hasn’t remotely earned that degree of weightiness, and I really hope that we aren’t meant to be thinking of (for example) Nazi gas chambers. There’s also a big reveal that, while terrifically chilling in the moment, raises a lot of logical questions that have no very good answers, from “Why did they bother feigning friendliness for three days?” to “How is it even remotely possible that these people weren’t caught long, long ago?” And I really should stress that the end of this film will be too much for some people—not so much in terms of graphic violence (though there’s one very upsetting act), but just in its singular…well, horror. Like Funny Games—albeit with a much more palatable façade—it’s the story of an innocent family that encounters pure evil by sheer chance, and never really has a chance. “Why are you doing this?” Bjørn cries, in agony. The only answer: “Because you let me.”

* I feel compelled to note for the record that both Funny Games and Speak No Evil are described as a “psychological thriller film,” rather than a horror film, in their respective Wikipedia entries. That distinction is so fine in these instances as to be nonexistent, in my opinion. And it truly was horror fans who felt aggrieved by Haneke’s exercise/lecture; I saw nobody complain that Funny Games looked down on them for enjoying psychological thrillers.

** Because the protagonists and antagonists are from different countries, this is the rare film from a non-Anglophone one that requires very few subtitles for American audiences. I’d estimate that 90% of the dialogue is in English, which both couples speak fluently. Only important Danish lines get translated (if it’s obviously meaningless chatter, they don’t bother), and everything in Dutch is unsubtitled, since Louise and Bjørn, whose POV the film maintains at all times, don’t know that language. To my surprise, no suspense sequence hinges on this mutual linguistic incomprehension. Bit of a wasted opportunity, if you ask me.

One of the first notable online film critics, having launched his site The Man Who Viewed Too Much in 1995, Mike D’Angelo has also written professionally for Entertainment Weekly, Time Out New York, The Village Voice, Esquire, Las Vegas Weekly, and The AV Club, among other publications. He’s been a member of the New York Film Critics Circle and currently blathers opinions almost daily on Patreon,