Being an expat in Korea, we’re often pigeon-holed into 2 categories: Teacher or Military, There are so many people doing original and interesting things in Seoul, In this new series, I’d like to introduce you to some creative people I’ve been lucky to meet. They may have started their professional journeys as teachers (or even military), but have explored so much more in the land of morning calm: Korea. Today I’m sharing some love about one of my favorite culinary wonders in Itaewon and how you can be part of Homeboy’s next great adventure at Vatos Urban Collective. Today’s Seoulcialite: Matt Lee of HOMEBOY Seoul!

(Scroll Down for Location & Directions to Vatos Urban Collective)

A little Seoulcialite note: I checked out HOMEBOY’s last pop up at Motor City earlier this year. We rocked up and, after a once-over of the menu, decided to order one of everything. The price is right: the total for 3 people was KRW 66,000 (cash only) and we were bursting by the time we finished up our last bites. The food is unparalleled, and the people behind the brand are dedicated not only to great food, but to the Food & Beverage community in Seoul. If you went to their first event there’s not a chance you’d miss this pop-up. If you missed it, arrive early or go at lunch to avoid disappointment!

Check out my review of HomeBOY Seoul,

What originally brought you to Korea?

I was born in Korea, lived more than half of my life in California. I was a college athlete (Soccer) and majored in Kinesiology. I was far away from the Food and Beverage industry. After College, I was lost between staying in the states or going back home and finding my future there. I needed a compass. 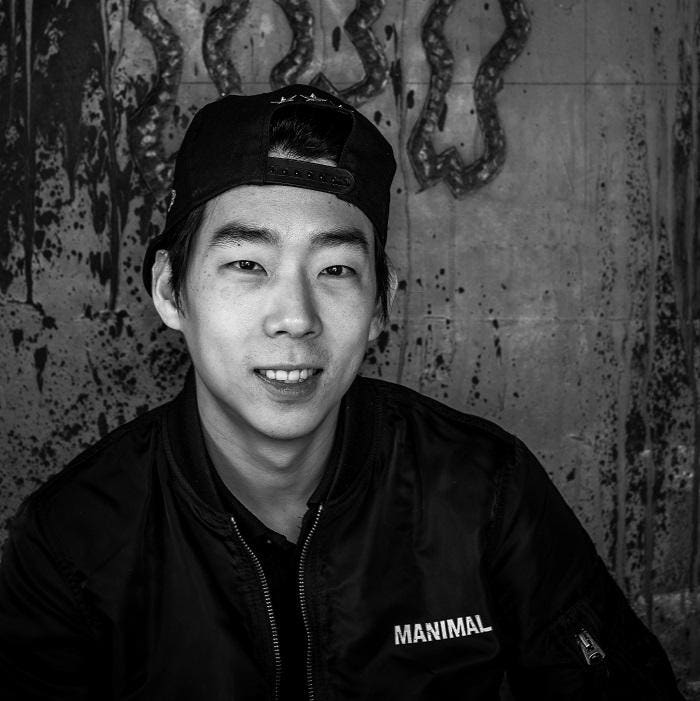 I met Dae-Young Kim (Co-founder of Manimal Tribe) when I was working part time at Vatos Urban Tacos. He was an Assistant Manager back then. I worked with him for about 4 months and then I went back to the states. When I came back to Korea after College, he contacted me first to ask if I wanted to work with him at Manimal Tribe. I couldn’t accept that offer right away, since I wanted to start my career in sports science.

I’ve been working at Manimal for about 6 months now and it became my life career and passion. I will make this industry hope for the hopeless; for the youngsters out there dying to get a job.

What,s your favorite thing about living in Seoul, Korea?

My favorite thing about living in Korea is I feel like I belong here. I lived in the states for a long time and feel like I’m pretty white-washed, but I never felt that I belonged there. And especially in the Itaewon community, I love how everyone cares about each other’s restaurants, share feedback, take care of each other off-work, doing collaboration. Such a small area but I’m sure it has the biggest potential and love.

Tell us a little about HOMEBOY and it’s Roots

We started HOMEBOY to give happiness and provide a place where F&B industry people can come after work to eat, rest, and play. We have three co-founders of HOMEBOY: Junki Kim, Sangyoon Im, and myself (Matt Lee). Each one of us works full time at Manimal Tribe. I have a strong love for HOMEBOY because it was my first project that I put my everything into it, EVERYTHING. We saw its potential and learned to “work hard and it will pay for itself”.

I want to say something to the next generation in the F&B industry out there: “I was a NOBODY part-timer at Vatos, college drop-out, nobody cares if I quit my job. But I worked hard and put my everything into it and it worked. Now I’m having a meeting with Vatos Owners in their room. If I can do it, you can do it.” I want HOMEBOY to be the place where F&B people and Seoul people can come together at Korea’s first Asian Street Food Restaurant. The most important thing for me is for HOMEBOY to be the hope for young people out there struggling about their future.

Manimal Tribe is definitely different company than others in Korea. Realistically renting out the whole restaurant for team members is hard. Manimal does with no questions asked. DY and the Co-owners have been mentors to our team members and role-models for us all. When we were preparing for HOMEBOY, our owners thought it wouldn’t work. I would say “it won’t be DAEBAK”. We did it DAEBAK and now they are very helpful to make HOMEBOY a brick and mortar store. We are always appreciating their guidance, encouragement and love.

Give us A Favorite memory of Korea and on of the rise of Homeboy.

Definitely, my favorite memory of Korea was the day when HOMEBOY opened. I was worried that nobody would show up. Right when we opened, customers started coming in until we had to close for the break time. When we opened for dinner service, there was “The Line” in the restaurant, popping with customers. It was an awesome feeling that I’ve never felt before. And the best part out of all was when customers were asking “When are you guys going to have the second pop-up?”

Will we be seeing you at HOMEBOY Seoul’s next pop-up April 17th? Let The Toronto Seoulcialite know to look out for you by commenting below!