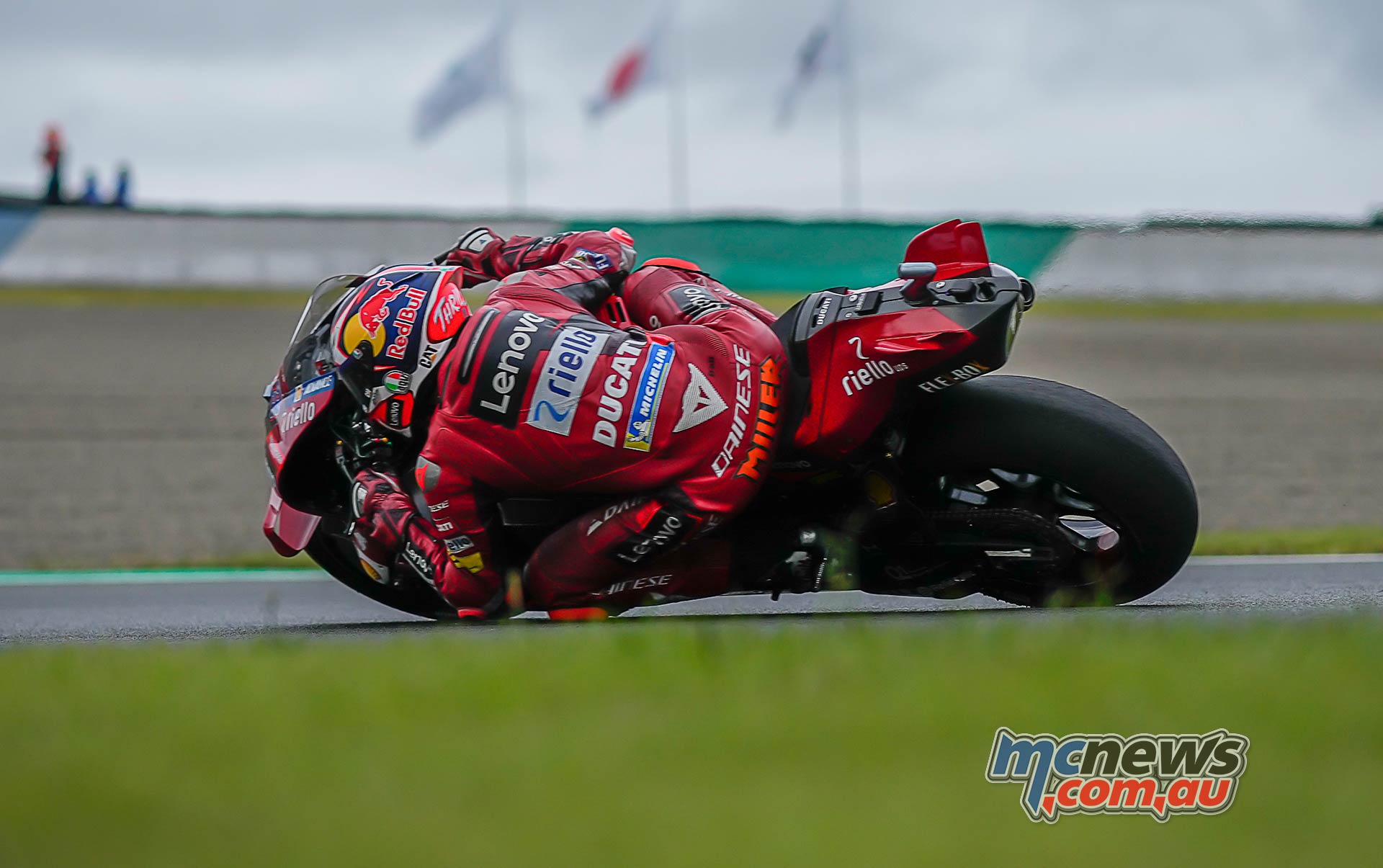 Jack Miller set the pace in a Ducati Lenovo Team one-two in an extended opening practice session at the Motul Grand Prix of Japan.

However, it could hardly have been closer at the top as Miller headed the three closest in the title fight: Francesco Bagnaia (Ducati Lenovo Team), Fabio Quartararo (Monster Energy Yamaha MotoGP) and Aleix Espargaro (Aprilia Racing) – and all four were split by just 0.068.

Aragon GP winner Enea Bastianini (Gresini Racing MotoGP), on the other hand, was just 14th-fastest after a late crash and he’ll be looking for more on Saturday.

With a special timetable in place for the Japanese GP, the premier class’s sole Friday practice session was an extended, 75-minute affair. While that gave teams and riders plenty of flexibility to work on race runs, the threat of rain in Saturday morning’s FP2 session, the only other running before the starting order for Q1 is set, meant that there was always going to be a big emphasis on single-lap pace.

Even the appearance of the rain flag, 30 minutes in, for some very light showers was not enough to dissuade anyone, with riders coming on for fresh Michelin slicks at regular intervals.

Miller had a very brief spell at the top inside the first quarter-hour of the session, but it was not until his final run that he really laid down a marker. The ‘Thriller’ leapt from 17th to first with a 1:44.660 as he lapped Motegi with a brand-new soft front tyre and soft rear.

Then, despite seemingly being held up by Team Suzuki Ecstar replacement Takuya Tsuda through the Hairpin, Miller went quicker again with the 1:44.509 which would not be beaten. Just for good measure, Miller clocked a 1:44.549 next time through which would be bettered only by Bagnaia.

By the time everyone had completed their time attacks, Miller was back on top, Bagnaia just behind, and Quartararo moved up with a 1:44.558.

“Today was intense, but it was good. Our pace doesn’t look too bad, but I was on the limit from the first lap. Our margin for improvement is not a lot, but we did our best, and it was quite okay.

“The abrasions didn’t affect my riding today. It was a bit strange at the beginning because it burns a little bit, but after a few laps you adapt to it. It was okay, even with the extra-long session.

“And the jet lag also didn’t bother me, because I don’t suffer from going to this side of the world. We need to analyse well which tyre we’ll use. The front is clear, but the rear isn’t yet. But our pace seems quite okay, so I’m ready.”

Aleix Espargaro, who was only 14th with a minute to go before the chequered flag came out, then pulled out a great lap to end the session fourth and just 0.068 seconds off the very best pace.

“I’m happy to be back racing on this track in a country that I absolutely love. The atmosphere is fantastic and I must say that the session also went well.

“We struggled a bit at the beginning because the only points of reference we had for the settings were from 2019 when I was riding an extremely different RS-GP, but everyone on the team did a great job, quickly finding the right direction we needed to go.

“I was also lucky on the last time attack because only one of my three attempts wasn’t cancelled by a yellow flag, but it was enough to get me fourth place. There are a few places on this track where I lose a bit of ground and I’m very fast at others, but the bike is working pretty well and that makes us optimistic.”

Fifth was also a fair bit to write home about as Luca Marini (Mooney VR46 Racing Team), who has never ridden around Motegi on a MotoGP bike before, rounded out the top five on a 1:44.645 and was top Independent Team rider to boot.

“I am very satisfied with this first session at Motegi, I did not expect to be immediately there with the very first ones, just a tenth from the P1, to be my first time with MotoGP.

“There is really a lot to do, we have not been riding here for three years and we have made great improvements in terms of electronics and tyres in recent seasons. Let’s try to understand where to work, what to do for another jump and to improve ourselves for the race. The weather will be crucial: if it doesn’t rain we could continue to work more easily for the race.”

Then comes Marc Marquez (Repsol Honda Team). At Honda’s home track, the number 93 claimed sixth with a 1:44.656 after also proving the initial pace-setter very early in the session.

It was an encouraging result for the eight-time World Champion despite displaying obvious shoulder soreness when he got off his RC213V at the end of one run, in what is his second round back following surgery on his right arm.

There was one mishap for Marc Marquez though, when he got his leathers snagged on the onboard camera as a crew member wheeled his bike back into the Honda box. Team-mate Pol Espargaro finished seventh on a 1:44.678.

“From when I first went out I was feeling quite good. It seems the areas where we are usually suffering a bit and less here and we can manage everything. Today I went full attack because there was just one session and I knew it might rain tomorrow so getting into the top ten was important.

“Let’s see what happens tomorrow but I am hoping for rain honestly because then we are already in the top ten. I am feeling very good with the new tyre, but also my feeling with the old tyre is quite good.”

“I am quite surprised because with the medium at other tracks, we were suffering a lot but here we are able to take a lot of profit from it. Everything worked really well with a lot of edge grip and traction and I was able to ride how I want.

“Today has been very good and with the weather that is predicted for the rest of the weekend, I think we can keep this speed up. It is a really nice boost to be back to feeling competitive again, and to do it in front of Honda’s home fans is even better. Let’s analyse everything well and come back ready tomorrow.”

“After so many top-10 spots slipping through my fingers by a matter of a few thousandths, my luck finally changed this time! Given the weather forecast, doing a good lap today was important and I managed to do just that. The bike is working well here. I think that the base settings are already at a promising level but we have a few ideas that will help us improve further. I’m pleased with the pace I maintained in race configuration. We were able to work well, taking full advantage of the single, long session.”

Those who will be hoping weather forecasts of rain on Saturday morning don’t come true include Johann Zarco (Prima Pramac Racing) in 11th and Bastianini in 14th. Both had late crashes, Zarco at Turn 7 after Bastianini had gone down at Turn 5, and for the latter it could prove to be a big blow to the title hopes which he had breathed life back into with his win just five days ago at Aragon.

Splitting them in 13th was Alex Rins, who debuted some eye-catching new aerodynamic pieces on the tail unit of his Team Suzuki Ecstar entry.

There’s just one more session before we find out for sure who is going straight into Q2 and who will be fighting to get out of Q1.

Moto2 World Championship leader Augusto Fernandez (Red Bull KTM Ajo) got his Motul Grand Prix of Japan off to the right start as he went fastest in FP1, putting in a 1:50.493 to finish just 0.084 ahead of Somkiat Chantra (Idemitsu Honda Team Asia) as light rain disrupted the day for the intermediate class.

Acosta earned third with a late 1:50.783, and Filip Salac (Gresini Racing Moto2) also joined the party with a 1:50.967 before more rain meant the pace dropped again.

Despite rain spitting, conditions improving and then worsening again over the course of the session, there wasn’t too much drama for the intermediate class.

MT Helmets – MSI’s Diogo Moreira set the pace in FP1 for the Motul Grand Prix of Japan, putting in a 1:57.252 in the first 40-minute session around the Mobility Resort Motegi.

Leopard Racing’s Dennis Foggia was second on Honda home turf, with Sterilgarda Husqvarna Max’s Ayumu Sasaki third and the quickest home hero as he looks to take another GP victory.

Despite overnight rain and grey clouds hanging overhead, it was a dry for start to the Friday afternoon session for the lightweight class, allowing some solid running.