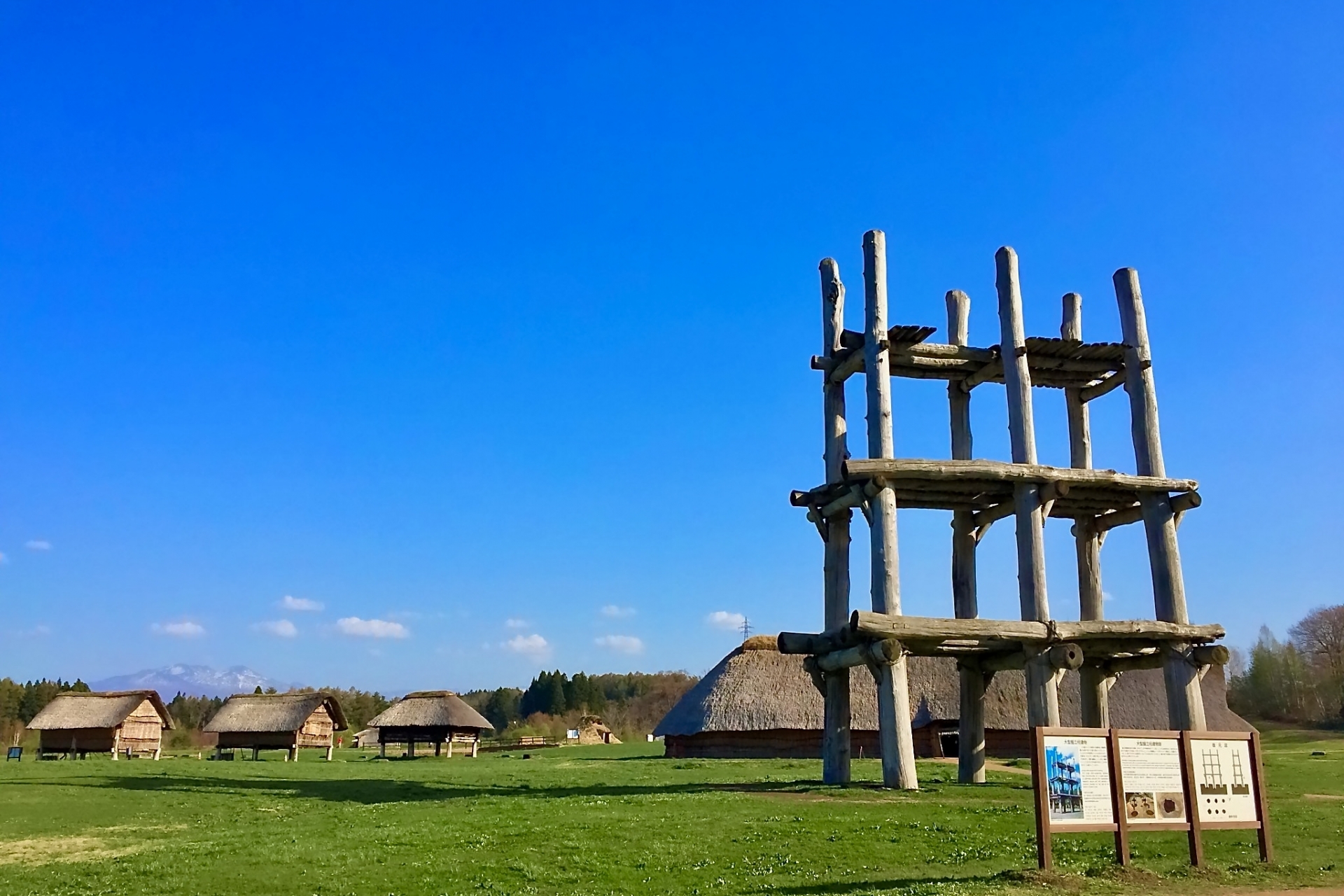 Miho Shimizu is a Japanese freelance writer settled in Shizuoka with her husband and two rabbits. Fascinated with traveling at the age of 18, she has spent most of her long holidays exploring incredible spots around Japan. She also loves to listen to music, draw, and read novels over a cup of green tea.

This post may contain some affiliate links. When you click through and make a purchase we may receive some commission, at no extra cost to you.

Japan has a long history spanning over 2,000 years as an independent nation. The very first humans in Japan however are believed to have settled there about 30,000 – 40,000 years ago. The Jomon period is one of the oldest periods in Japanese history which dates back to prehistoric times around 15,000 years ago. During this time, ancient people experienced rapid climate change, adapted to a new environment, and successfully developed society in harmony with nature.

But what is the Jomon period? What was life in the prehistoric period like, and where should you visit for memorable Jomon experiences in Japan? Learn more here!

1. When Did the Jomon Period Begin?

The Jomon period is a prehistoric period in Japanese history. According to some archeological research and excavation, it is widely believed that the Jomon period started around 13,000 BC, and lasted for more than 10,000 years until somewhere around 300 BC. Some experts also argue that it is one of the oldest civilizations in world history. The name “Jomon” (縄文) originally came from the pottery which was created during the time.

2. Villages in the Jomon Period

After the end of the ice age, the global temperature gradually started to rise, which allowed ancient Japanese people to settle in one place. This environmental change resulted in the beginning of the Jomon period. People started to form primitive villages with their families and relatives, build pit dwellings, and created small communities across Japan.

Ancient pit-dwelling houses were built half in the ground like a shelter, with multiple wooden pillars to support the framework, and featured a thatched roof on top. Elevated storehouses are another example of iconic structures from the Jomon period that were used to protect food away from high humidity which could have a bad effect on its freshness. For special occasions, they were also used as a site for festivals or ritual ceremonies.

3. What Did They Eat in the Jomon Period?

To survive, Jomon people hunted wild animals, caught fish and collected shells in the ocean and rivers, and gathered edible wild plants in forests. They also invented new tools such as bows and arrows, as well as elaborated stone tools that were carefully sharpened and polished.

These tools were essential for hunting small animals such as rabbits and deer, cutting trees, and cracking the hard shells of nuts. At Jomon sites across Japan, remains of fish and animal bones, as well as fragments of shells were widely unearthed. They are typically collected at a designated place called “Kaizuka” (貝塚), which translates as “shell mound” in English. Kaizuka is basically a place where people dumped away trash and unnecessary things that were not in use anymore.

Jomon culture boasts a wide range of valuable handicrafts which were carefully made by hand by ancient Japanese people for several purposes. Jomon Pottery is an iconic type of earthenware that was produced during the time, and it is also known as one of the oldest of its kind in the world.

The most distinctive feature of Jomon pottery is the unique rope patterns that can be found in its elaborated design. This clearly explains why the period is called “Jomon” (縄文), which literally means “rope pattern” in Japanese. The invention of Jomon pottery enabled ancient people to store food for a long period of time and boil them easily.

Beautiful ancient accessories were also discovered at the sites of Jomon ruins, including necklaces, bracelets, and earrings. They were typically made from beautiful shells or ores such as jade. At the time, jade was only available on Japan’s main island, but these accessories were also excavated at multiple Jomon sites across Japan, including Hokkaido which is separated from the main island by the sea.

This fact indicates ancient people conducted domestic trades between villages in the distance. They are believed to have traveled to other regions by wooden boats, enjoyed interaction with the locals, and shared useful information together.

Dogu figures, simply called “Dogu” (土偶) in Japanese, are an ancient type of iconic clay figure which symbolizes the Jomon culture. The human-shaped figures are often discovered at graves or settlements at Jomon sites in Japan. Although researchers haven’t come to a clear conclusion about what these figures were made for, many suggest Dogu figures were mainly used for religious rituals.

Dogu figures are rarely found in perfect condition, which means they are missing some parts of their body, such as legs or arms. This is because ancient people intentionally broke them for some unknown reasons.

5. Transition from Jomon to Yayoi Period

Around 300 BC, Japan entered a new era which is known as the “Yayoi period”. One of the most notable features of the Yayoi period is the introduction of rice farming and agriculture which were brought from China. They drastically changed people’s lives, and people started to grow crops to survive instead of hunting and fishing. Metalware and metal tools also came into use during the time, and they rapidly replaced the old stone ones.

6. Where to Visit Jomon Period Sites in Japan

Located in Aomori Prefecture, The Sannai Maruyama Site is Japan’s largest and one of the most famous Jomon sites. This archeological site dates back to the early to middle Jomon period and displays full-scale reconstruction of Jomon buildings such as pit-dwellings and pillar-supported structures. Their museum also boasts informative exhibitions and showcases 1,700 historically valuable items that were unearthed there.

Omori Midden Site Park is a perfect spot for your first Jomon experience around Tokyo. This peaceful park was established at the former site of Omori Midden, which was accidentally discovered by Edward S. Morse, an American archeologist in 1877. At the lovely park, you can see the status of ancient shells deposited through centuries in the late Jomon period .

Located in Tokamachi City, Niigata Prefecture, Tokamachi City Museum offers an exciting Jomon cultural tour that allows you to experience real life in the Jomon period. You can join adventurous fieldwork activities, including hunting and gathering experiences in nature. At the museum, you will also be given a chance to deepen your understanding of Jomon pottery on display. Jomon restaurant is where you will be served healthy, delicious Jomon dishes featuring both ancient ingredients from the Jomon period as well as locally sourced specialties!

5000 (adult)
Free admission for junior high school students and under

Jomon Prehistoric Sites in northern Japan (Hokkaido and other prefectures)

In 2021, Jomon prehistoric sites in northern Japan were officially designated as World Cultural Heritage Site by UNESCO. It is a group of 17 archeological sites dating back to the Jomon period. They are scattered across the northern Japan area from Hokkaido all the way down to Iwate and Akita prefecture on Japan’s mainland.

Compared to other modern Samurai periods, such as the Edo period (1603 – 1868) and the Meiji period (1868 – 1912), prehistoric periods in Japanese history might not seem appealing to foreign people. However, their primitive lifestyle and unique culture are worth learning, and they have definitely contributed to establishing a foundation of what Japan is today.

No written records exist from the Jomon period, but you can still get a clear insight into the mysterious period by exploring a large collection of archeological artifacts exhibited at museums across Japan!

Japan Wonder Travel is a travel agency that offers guided tours throughout Japan.
From private walking tours to delicious Food and Drink tours, we can help you organize the best tours just for you! If you want to explore Japan and learn more about the history and backstories of each area you are visiting, our knowledgeable and friendly English speaking guides will happily take you to the best spots!
In addition, we can provide you with any assistance you may need for your upcoming trip to Japan, so please feel free to contact us if you have any questions or need some help!

Tokyo 1–Day Highlights Private Walking Tour (8 Hours)
There’s no better way to explore an area than taking a tour with a knowledgeable local guide. You will have the chance to learn about the history and interesting background stories of Tokyo, as well as discover some hidden gems which can be hard to do without a guide.

Kyoto Private Full Day Walking Tour
On this full-day private tour of Kyoto, you will be able to see the highlights of Kyoto in just one day and at the same time develop a deeper understanding of both the culture of the area and Japan as a whole.