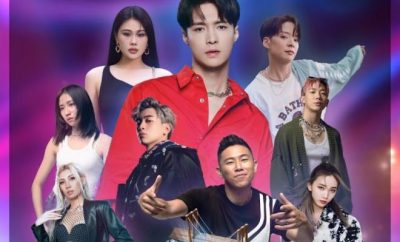 Lay Zhang to headline his first-ever American festival at the MetaMoon Music Festival.

The MetaMoon Music Festival is set to take place on November 26 in New York, with headlining act Lay Zhang raising immense excitement for the occasion. The event, occurring in New York City’s Barclays Center, aims to provide a collective space for Asian and AAPI artists to shine onstage and share their culture in America.

The festival includes a stacked lineup of artists who will captivate fans with their performances. Artists include Lay Zhang, 9m88, Karencici, ØZI, Sury Su, MC Jin, Amber Liu, Tia Ray, and Tyson Yoshi. To immerse attendees in Asian culture even further, the event will include a market space and a food crawl as well.

Notably, his participation in the event is yet another move by global artist, Lay Zhang, to support a closer global community through music. His recent two EP releases are fittingly titled, East and Westencompass his efforts to bridge gaps among different people.

Now, the artist will take to the MetaMoon Music Festival stage in his first-ever headlining festival in America. Ahead of the event, Hellokpop spoke to Lay about his upcoming performance and his hopes for Asian music in the future.

As this is a momentous moment in his career, Lay first shared his gratitude for the opportunity to perform at the festival. He explained, “Each opportunity is a blessing. I love performing; it never gets old. So, I hope to have the chance to perform at more festivals, on more stages…”

And his biggest hope? He laughed, “Well, and the Grammys.”

However, at the root of his ambitions is the desire to be a conduit for listeners and culture. Lay emphasized, “The most important thing is to connect to each others’ insides with music…Music is powerful and brings people together across languages ​​and cultures. It helps overcome language issues. This is why I want to bridge east to west.

When asked about his hopes for Asian artists, Lay expressed his wishes that “Asian artists can be appreciated worldwide and given the chance to sing, so many languages ​​and cultures in the world can come together.”

Lay is known in the music community for keeping his culture and nation close at heart, which is reflected in his discography. Finding a delicate balance between different listeners is instrumental. He expanded, “As Chinese artists, it’s about finding the middle ground between east and west. Soon, you’ll see Chinese artists on the world stage.”

His production style has evolved very much throughout the years due to his wide cultural experiences, stating, “I was born in China and been influenced by Korea and America, and so I wanted to create something new [in my music],

His recent title track, “Veil”, off of his EP West, aims to bring listeners from around the globe together. He said, “‘Veil’ has a fun vibe and it’s easy to dance to. After four years, I finally had the time to release it.”

Ahead of his stage at MetaMoon Music Festival, Lay prepared extensively; “I’ve been working all year to present this stage…working on my vocals and dancing, like krumping…”

As an EXO member and soloist, Lay fondly discussed the differences in performing with a team versus independently. He said, “So performing with my boys is different… performing solo can be stressful and lonely.”

Despite the pressure, Lay shared his excitement for his upcoming stage during the festival; “I can’t wait to see the stage. I’ve heard the Barclays Center is very big, so I don’t want to disappoint people.”

While the performance is exciting on its own, Lay shared he was thrilled to be back in New York for another reason. He laughed, “Hot dogs!! I’m excited to eat hot dogs. There are so many delicious things here.”

As for his American fans, many may wonder if Lay has plans for a US tour any time soon. The artist teased, “Not yet!”

However, fans can soon see Lay grace the stage at the Barclays Center on November 26 during the MetaMoon Music Festival. Fans can purchase their tickets for the event here,

Excited to see you at the @metamoonfest at the @barclayscenter on November 26th! pic.twitter.com/p6YlgeDWnE

The MetaMoon Festival is produced by Hong Kong-based, Graceful Media, which is partnering with Live Nation for the event which celebrates the Asian diaspora. Boardroom, a 35V company founded by Kevin Durant and Rich Kleiman, along with Tapestry’s Coach, Kate Spade New York, and media platform RADII, will support Apex for Youth by donating tickets for students and families to attend the event.

Other partners include HungryPanda, an online delivery and lifestyle platform, which is providing promotional support.

Regarding the festival, Tapestry’s Chief Inclusion and Social Impact Officer David Casey, stated, “The Tapestry Foundation and Coach and Kate Spade New York brands proudly stand taller together with Apex for Youth to unlock the power of underserved Asian and immigrant community youth through our commitment to equity, inclusion and diversity at this year’s inaugural Meta Moon Festival.”

The collaborations as a whole reflect MetaMoon Music Festival’s mission to engage with local communities and businesses via Asian artists and pop culture.

Hellokpop sends its thanks to Lay Zhang and The Lede Company for this interview. This interview was conducted over Zoom in English.