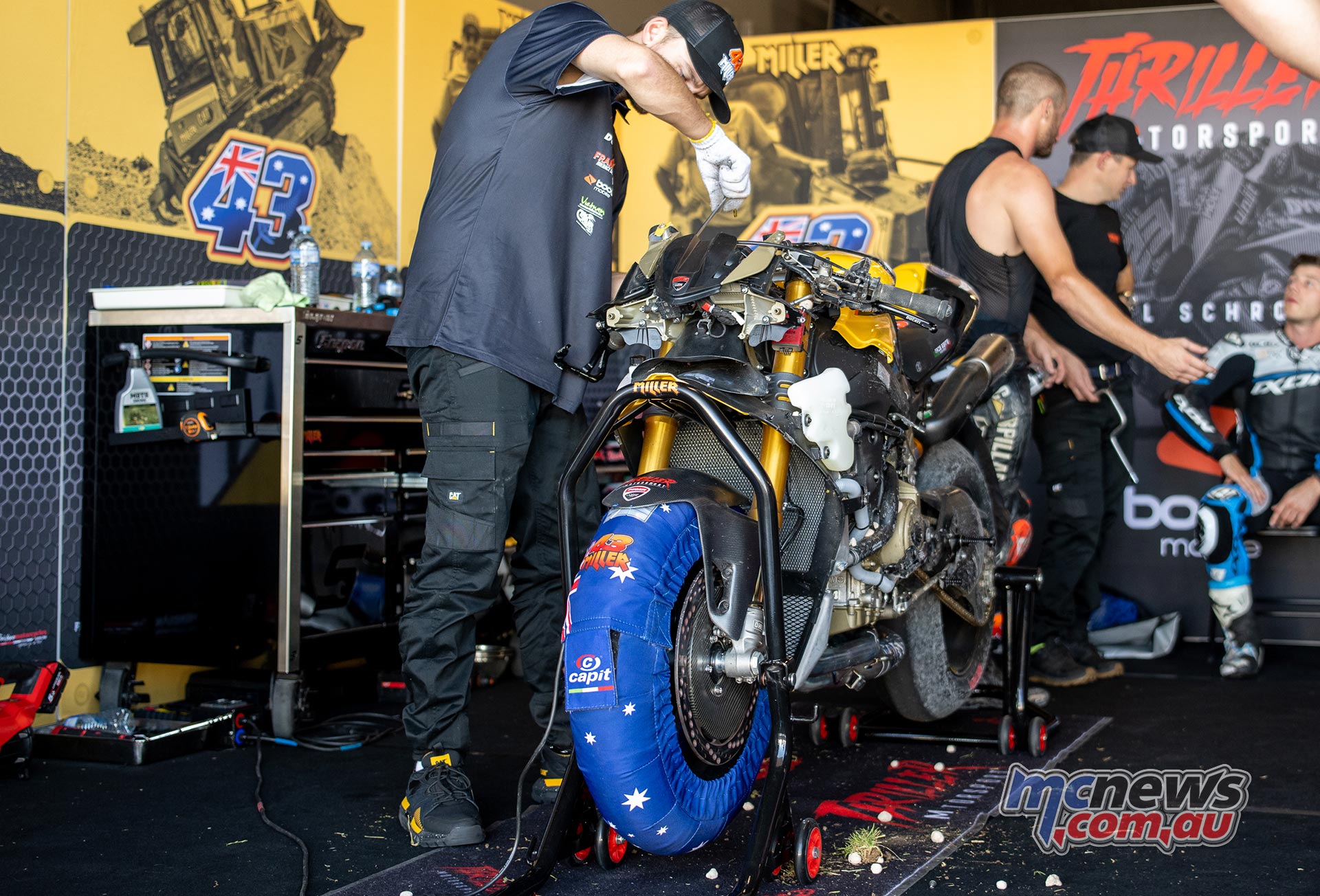 Track temperatures were nudging 50-degrees Celsius (about 125 Fahrenheit), by the time Superbike competitors hit the track for their third and final 25-minute free practice session today at The Bend.

Jack Miller had made significant progress in the FP2 session. He had reported that he could feel a slight vibration from the bike at times and Pirelli technicians had suggested he try the SC2 front in this FP3 session. His Thriller Motorsports team-mate Josh Hook hadn’t fared quite so well in FP2, a high-side due to an electronics glitch smacking the reigning FIM World Endurance Champion onto the deck. His Fireblade sustained some damage that the team are working hard to repair but it looked unlikely he would be on track in this session.

Herfoss then went top with a 1m51.661 but not for long as Jones responded with a 1m51.377. It was not until almost ten-minutes later when Cru Halliday got wound up again to drop in the fastest time of the weekend thus far, a 1m50.969 under the existing race lap record, but a few tenths away from Wayne Maxwell’s 1m50.520. Qualifying lap record. That meant we had a YRT 1-2 at the top of the time-sheets with ten minutes remaining in the 25-minute session.

Jack Miller then got wound up…. Under at the first split, almost lineballed through the second, but then lost a few tenths in the third sector before going down at the penultimate corner. A red flag was then produced to recover crashed bikes which temporarily halted any further progress. Arthur Sissis was also on a hot one, more than a tenth under at the first split.

Riders then returned to pitlane and waited for pit-lane to open for the remaining five-minutes in the session. The order at that juncture was Halliday leading the way from Jones, Herfoss P3 ahead of Maxwell and Sissis. Falzon had worked his way up to P6 ahead of Allerton and West, Josh Waters P9 and Broc Pearson rounded out the top ten ahead of Jed Metcher.

The delay was less than ten-minutes before pit-lane opened again and most of the field wasted no time in getting back out on track. Red first sectors were lighting up the timing screens everywhere…. But few were carrying that speed through the remaining sectors.. One that did was Arthur Sissis, who split the YRT men to make it a Yamaha 1-2-3 with less than a minute to go on the shot clock. Herfoss and Maxwell also improved their best to go P4 and P5 respectively, Maxwell then went P3 briefly before Mike Jones ended the session on a 1m51.191 to push Maxwell back to P4.

Jack Miller’s late crash prevented him from putting any late time attack and thus he ended the session in P14 but that does not correlate to his potential speed here this weekend and his time from P2 placed him eighth on combined times for the day outright.

This afternoon we saw the hottest temperatures that we are expecting this weekend, however, while today started out cool it will not be like that tomorrow as overnight temperatures are only expected to go down to 18, before a projected top of around 30-degrees, with a chance of a thunderstorm to turn things balmy on Saturday afternoon… Sunday race day is expected to be much cooler with a forecast of only 21 and a very slight chance of an occasional shower.

For reference the qualifying record here at The Bend is a 1m50.520 and the race lap record a 1m50.972, both set by Wayne Maxwell here last year.