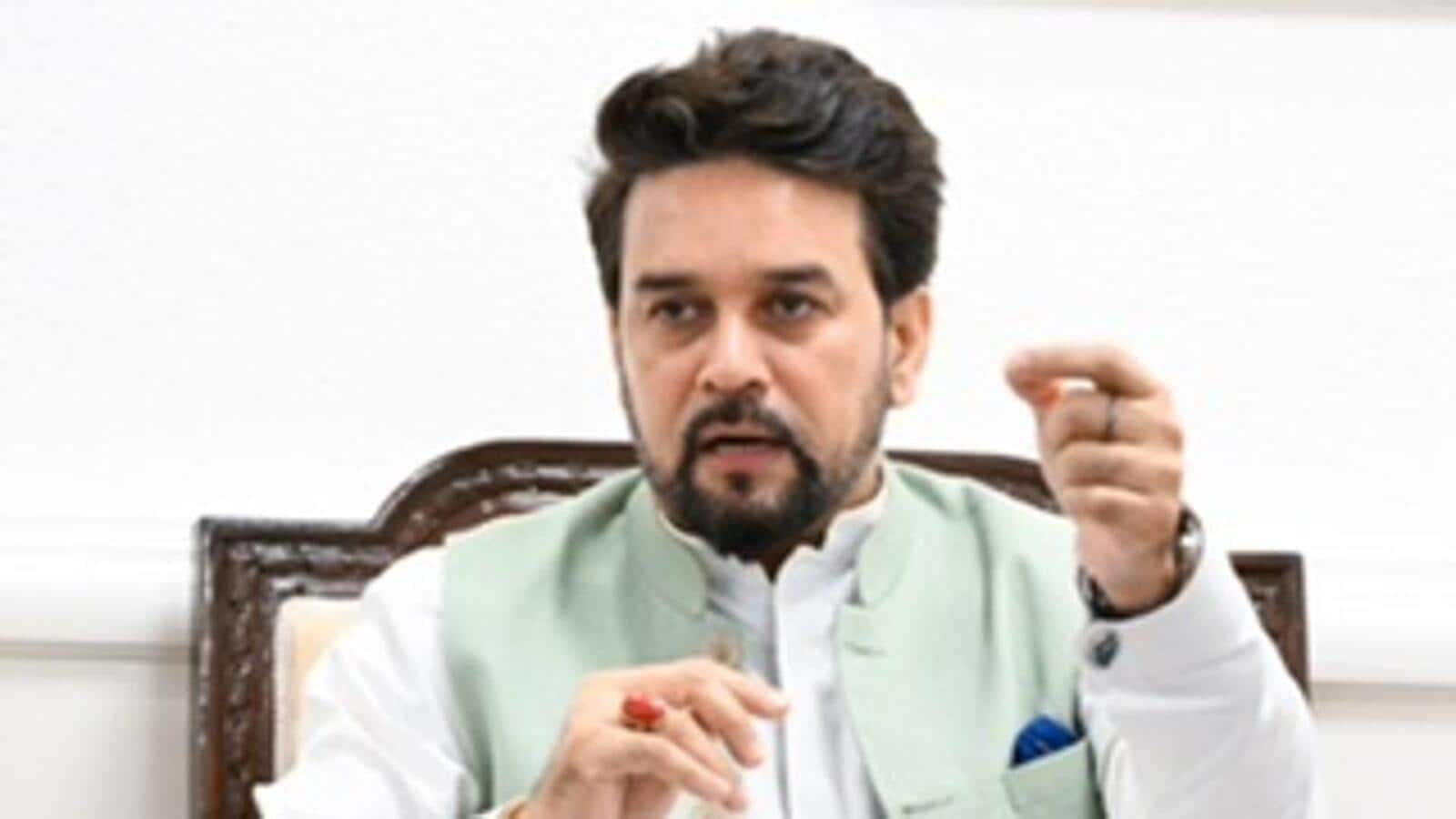 New Delhi: Despite attempts by opposition parties to form a front against the Bharatiya Janata Party (BJP), there is no real challenge to Prime Minister Narendra Modi’s popularity and his politics of development, Union Minister Anurag Thakur told HT in an interview, in which He also talked about the lack of internal democracy in the Congress and other regional parties, whether the Aam Aadmi Party (AAP) can emerge as a challenge, and self-regulation in the media among other issues. Edited excerpt:

BJP has already started preparations for the 2024 general elections. Several political parties are also trying to unite a united opposition against the BJP. How do you see the electoral battle? If you look at the way BJP works, it is a cadre based party; Our emphasis is always on strengthening the organization and we take every election seriously and that is why we started preparation 15 months in advance. For example, if I am in charge of a cluster, I will report back how we are strengthening the cadre at the booth level, how we are helping the local administration in implementing central government schemes, and how they Being made more accountable. I am looking after Maharashtra and my first constituency was to visit Kalyan. In 2014 and 2019, the alliance partner won the seat with the help of BJP. Therefore, strengthening BJP at the grassroots level, implementing the Modi government’s schemes, will ultimately help the BJP and its allies at the grassroots level.

You just mentioned that the allies won with the support of the BJP. In 2024, there are many states where the BJP will contest alone, for example in Punjab and Bihar, as the number of allies has shrunk. How will this augur well for the BJP?

Look at the opposition’s mahagathbandhan (grand alliance), whether it was during 2014 (Lok Sabha) or 2017 or 2022 Uttar Pradesh elections, a big alliance was contesting against the BJP, but see the results. It is PM Modi’s popularity, and it is the beneficiaries who have benefited from our policies in the last eight years. We have given more in the last eight years than others in the last 60 years. I’ve said it many times, better than eight (Eight is better than 60). Under the leadership of PM Modi, Atmanirbhar Bharat (Self-reliant India) is making its mark in every field.

Do you think the BJP has reached its peak in many states with 303 seats and the scope for development may be limited, and there may be an anti-incumbency wave? How will you combat it? If you look at the development of BJP, before 2014 we were not in Tripura, Assam, Haryana etc. We have expanded and now have governments in many states. There are many states in the South and in the North-East where we have expanded well and I still see a lot of potential for expansion and growth in many areas. This is because of the distribution, the reforms we have brought in and the way we have improved the distribution mechanism from vaccination to free food grains through Direct Benefit Transfer (DBT), Jan Dhan or Aadhaar or during the COVID pandemic. We have touched a large section of the society which has benefited.

You were also in charge of UP, would you say that the free food grains scheme was one of the biggest factors for BJP’s victory in UP? Not necessary. Before 2017 the big issues in UP were law and order situation, crime rate, no investment and corruption. People have seen the government of Mayawati’s Bahujan Samaj Party and Akhilesh Yadav’s Samajwadi Party, when they compared it with Yogi Adityanath’s government, they saw a decisive leader who could deliver, Thinking Emandar, Work Strong (clean intention, decisive action). This one line was not just a slogan. People believed that it is possible if there is a Modi-Yogi alliance. It is from Yogi ji’s delivery and Modi ji’s overall delivery that trust in the government is built. Food was not for the vote; Just as there were vaccines to prevent epidemics, so food was to stave off hunger.

What do you think will be the impact of the India pair visit? Senior BJP leaders have been talking about it and criticizing it, are you not giving oxygen to the party? If Congress would have survived by giving them oxygen by us (attention) Sowhat is the matter…and what’s the harm.

Some say you deliberately focus on the Congress because then you don’t have to focus on the AAP, which is emerging as a potential challenger, especially in your home state of Himachal Pradesh. You do not have a presence in Himachal Pradesh. I inducted their state president and many other office bearers in the BJP in one go. They cannot even gather a crowd of 200 people. The bubble has burst and his real face has been exposed by the liquor scam. And no matter how loudly the liquor scam kingpin Arvind Kejriwal and main accused Manish Sisodia give clean chit to themselves, only after investigating the case, see who will be in jail, as Satyendar Jain has been doing for the last four months. . ,

Do you mean Manish Sisodia? You know who the accused and the gangster are. You might not have named Kejriwal because you think he doesn’t sign any file. There is hardly any other Chief Minister in the last eight years who does not have any portfolio and who has not signed any file. Has the media ever written about it?

Do you see that AAP is emerging as a challenger to BJP in Gujarat, can it take the position of Congress in the state? The people of Gujarat are very intelligent. The faith that people have in the BJP for the last two decades, the development that has taken place in the same time, and the contribution of two big leaders (Modi and Amit Shah) from the state, can’t be matched. , There is no comparison to PM Modi’s credibility. In the last election they spent so much money, put on hoardings, but where are they today? You have to be Narendra Modi and burn your credibility to get a place in people’s hearts. There has never been a leader in this country whose instructions to clap or clap or light a lamp (during covid) have been followed; And when they said give up subsidies, more than 10 million did. Who can match that credibility? And who in the land of (Mahatma) Gandhi will accept the liquor scammers?

AAP says that in view of Gujarat elections, liquor scam is being exposed in Delhi? This is Delhi’s scam, whose echo is in the country and the world., (It is Delhi scam which is echoing in India and abroad).

Sting operations were done (against AAP leaders) but no action has been taken till now. Why is there delay? Investigating agencies are investigating and will take action based on that. Had Satyendar Jain been as clean as Kejriwal claimed, he would not have been in jail. He used to give clean chit in Punjab also, but the law and order situation is deteriorating. In Jalandhar, an MLA killed a DSP, killings are taking place in a state where 34 people have lost their lives in gang wars in the last five months.

How seriously is the BJP taking Nitish Kumar, who was once your ally and has also taken off his hat for a bigger role at the national level?What can be said about the person who has always longed for the chair (power) and has left allies behind. You saw in the press conference, they (K Chandrasekhar Rao and Kumar) were playing musical chairs. What is the model of Nitish Kumar, his role in deceiving allies from Samata Party to JDU has been among the public. Will Rao see her as a leader, or Kumar will see Mamata Banerjee as a leader or Chandrababu Naidu will come along? Congress is going on its different path… Who is the leader, it is not about Bihar but it is a matter of India. You saw in the press conference, they (Rao and Kumar) were playing musical chairs.

PM attacked dynasty in his Independence Day speech, but people also question whether there is dynasty in BJP… One needs to listen to his old speeches where he has defined dynasty. After Jawaharlal Nehru, Indira Gandhi took charge of the Congress, followed by Rajiv Gandhi, then Sonia Gandhi, then Rahul Gandhi… It is control over a party. After Mulayam Singh Yadav, Akhilesh’s dominance on the SP… Those who contest the elections come after getting votes. A person can be dynastic once, but after winning four times, he cannot be called dynastic because people have voted for him.

Do you think the PM was targeting Congress with his statement or was it aimed at regional parties? Look at the churning going on in the regional parties. People are in the process of leaving because they don’t see the light at the end of the tunnel; They cannot see anything for themselves in the future. He cannot be the head of the party and he cannot be the president of the regional unit, forget about the national party. Where is the democracy within these regional parties? From Farooq Abdullah to Omar Abdullah, from Mufti Saeed to Mehbooba Mufti, from Mulayam Yadav and Akhilesh Yadav to MK Stalin… all are in the same boat. And look at BJP, is there any party president from the same family?

Recently you made a statement about irresponsible behavior of TV channels and Supreme Court also commented. Do you have any plan in mind to deal with this problem? We work on self-regulation mode and I think they are quite mature now… I think in a mature democracy, they know their responsibility. And I’m sure, nobody wants such a situation (for external regulation)… and I hope self-regulation will work.

What about defining or legislating an oversight body or hate speech?If anyone has objections, there are three layers to it. They can file a complaint with the broadcaster, the second with their association, and the third with the Interministerial Committee. Most of the complaints are resolved at the first and second level.