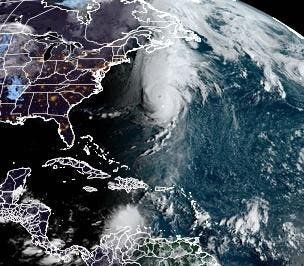 The 2022 Atlantic hurricane season was on pause through much of August but has ramped up significantly as we entered September. At the time of writing, the National Hurricane Center is monitoring Hurricane Fiona, Tropical Storm Gaston, Tropical Depression Nine, and two tropical disturbances. However, the two systems that are catching my eye (for very different reasons) are Hurricane Fiona and Tropical Depression Nine. Here’s why.

Though not unprecedented, it is rare for storm of tropical origin to reach places like Newfoundland, Nova Scotia, or Greenland. In Scientific AmericanChelsea Harvey documented a few in recent decades – Larry (2021), Maria (2011), Igor (2010), and Noel (2007). The hurricane “cone of uncertainty” for Hurricane Fiona touches (wait for it)….Greenland. After causing significant flooding and power outages in Puerto Rico and other parts of the Caribbean islands, Hurricane Fiona is passing Bermuda as a Category 3 storm, on its way to places not necessarily on the tip of our tongues when we thing about hurricanes – Nova Scotia and Greenland. Colorado State University hurricane expert Phil Klotzbach tweeted on Thursday, “#Fiona’s central pressure is down to 932 hPa – the lowest pressure for a #hurricane this far north (30.8 deg N) in the open Atlantic (eg, excluding the Gulf of Mexico) in the satellite era (since 1979) ). The World Meteorological Organization (WMO) tweeted, “#Fiona is set to be a “historic storm” for eastern #Canada, says @ECCC_CHC….”

The morning words of the National Hurricane Center discussion affirms the WMO Tweet – “While the cyclone will weaken some during the transition, it is expected to remain a powerful hurricane-force cyclone as it crosses Nova Scotia into the Gulf of St. Lawrence.” The transition mentioned is called an extratropical transition, At this point, the storm starts deriving energy from differences in air mass temperatures as opposed to warm ocean water. This is quite common as hurricanes move northward and is exactly what Hurricane Sandy did in 2012. Fiona will bring significant winds, rainfall, and storm surge to parts of Canada and further poleward. For perspective, Ben Noll tweeted, “Maximum individual wave heights are forecast to reach over *80 feet* in the Atlantic & near Nova Scotia through Saturday – the approximate height of a six story building!”

Speaking of water temperatures, they are unusually warm near Canada as well. Noll, a meteorologist with the National Institute of Water and Atmospheric Research (New Zealand), has been sounding the alarm all week about the “marine heatwave” in the region. What’s that? According to the National Oceanic and Atmospheric Administration (NOAA) website, they are, “periods of persistent anomaly warm ocean temperatures, which can have significant impacts on marine life as well as coastal communities and economies.” The map above shows that water temperatures near Canada are warmer than normal by 2 to 5 degrees. Noll tweeted this ominous warning earlier in the week, “Younger Nova Scotians will be telling their grandkids about what it was like during Hurricane Fiona in 2022.” Only time will tell if it ends up being the strongest storm on record for Canada, but it will likely be in the conversation.

In more tropical places, another threat looms, and this one is relevant to the US Tropical Depression Nine is expected to develop into a Tropical Storm and eventually a Hurricane. Earlier in the week, there was quite a bit of spread in the model forecasts. Part of the reason is that a true low-level circulation was not apparent, and the outflow from Fiona was influencing it. Late Thursday, I noticed a circulation in satellite-based winds, and this morning, satellite and aircraft observations also show a circulation (image below).

The National Hurricane Center writes, “The model guidance early on is in fairly good agreement, but larger across-track spread begins to take shape by 48 hours, with the GFS and its ensemble mean located further south and west, and with the ECMWF and its ensemble mean located further north and east.” This suggests there is some initial consensus, but after 2 days, there is still some uncertainty. There will likely changes to come with the evolving forecast. However, the message is increasingly clear – the Florida peninsula is in play, and residents should increase their alert and preparation reflexes. People in Jamaica and the Cayman Islands should also be monitoring the storm carefully. In the next few days, conditions are favorable for the storm to intensify.