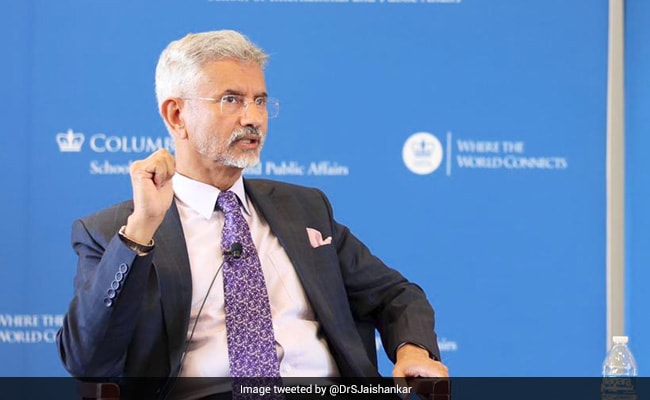 S Jaishankar said that the biggest change we have seen in the world is the rise of China.

External Affairs Minister S Jaishankar on Wednesday said it is in the mutual interest of India and China to find a way to accommodate each other because of the whole idea of ​​the rise of Asia, which is dependent on the continent’s largest economies coming together. . With each other.

Mr Jaishankar, who is in New York to attend the annual UN General Assembly session, made the remarks while interacting with the audience at Columbia University here while responding to a question amid the border standoff between China and India.

“In our time, we have seen the biggest change in the world, the rise of China, there is no question about it,” he said, adding that what it has done is that because of the comparison, “it is in a sense, To some extent undermined India’s dramatic rise.” He said that one judges India on its merits, the progress it has made, the growth rate which is fantastic, “but then you have China which has grown faster, more dramatically at the same time. “

“The issue for us today is how two emerging powers find a modus vivendi in a dynamic position in perfect proximity to each other. This is a very complex problem. In history, there have been very few similar situations. It’s easy to deal with a situation like that,” he said.

Asked when a Chinese consulate would be set up in Chennai, he said that “To be very honest, there was a time when we were thinking of expanding our respective consular presence. I remember recent conversations.” No. But in any case at the moment, very frankly, I think it’s important for our relations with China to normalize. So I think that’s where our focus is. As I tell people I live, relations are not normal, for reasons that all of you know.” Mr Jaishankar also said that China is not easy to manage, Russia is not easy to reassure and these are natural challenges in a changing world.

Mr. Jaishankar was responding to a question by Panagariya, who referred to the minister’s book in which he wrote, “It is for us to engage America, manage China, cultivate Europe, reassure Russia, Japan.” It’s time to bring it into play.” He said that over the years, “we have challenges in the Indo-Pacific, we have challenges in Eurasia. We have tried to address both effectively. Today we are more firmly committed to our interests than ever before.” We are seen speaking for the Global South. But we have also seen as a really deep democratic force that has underscored the values, the relevance of democracy.” On non-alignment, he said that the world today needs free countries, free minded countries who take the position.

“My understanding is that the politics of the last six months has shown that there is a place for countries that are not part of a very polarized landscape.”

His remarks come a week after Indian and Chinese armies began the decommissioning process at PP-15 in the Gogra-Hotsprings area in eastern Ladakh after withdrawing their troops in the middle of this month and dismantling temporary infrastructure from the point of friction. Joint verification was done. ,

The eastern Ladakh border standoff began on May 5, 2020, following violent clashes in the Pangong Lake areas.

Both sides gradually increased their deployment by mobilizing thousands of soldiers and heavy weapons.

As a result of a series of military and diplomatic talks, the two sides last year completed the demilitarization process on the north and south shores of Pangong Lake and in the Gogra region.

The disengagement in the Pangong Lake area took place in February last year, while the withdrawal of troops and equipment at patrol point 17 (A) at Gogra took place in August last year.

Last month, Mr Jaishankar said in Bangkok that relations between India and China are going through an “extremely difficult phase” that Beijing has had at the border and stressed that if the two neighbors cannot shake hands, There won’t be an Asian century.

In response to a question, Jaishankar had said that the Asian century will happen when China and India come together, but if India and China cannot come together then it will be difficult to have an Asian century.

(Except for the title, this story has not been edited by NDTV staff and is published from a syndicated feed.)