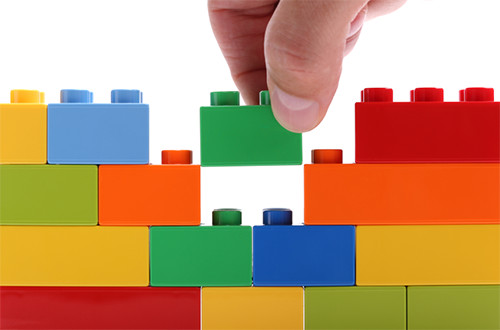 The Korean writing system was intentionally crafted to be simple, easy to learn and to precisely capture the sounds of spoken Korean.

Due to its simplicity and logic, I’ll be able to teach you the Korean syllable structure in a quick, three-step guide (even if you’re starting from zero).

1. The Structure of Korean Syllables

Think of Korean syllables as building blocks or bricks.

Each brick fits a minimum of two and a maximum of four Hangul letters. The letter combinations will include both consonants and vowels,you can’t make a syllable without the two.

The structures of Korean syllables are affected by the letters they involve. Whichever Hangul letters are needed, results in the written structure of the syllable changing.

When written, Korean syllables should fit neatly within a rectangular or square outline—a nice and simple shape. But what actually goes within that square?

Here are a few examples:

As you can see, the more letters contained within the square, the tighter the syllable block becomes in order to uniformly fit each letter. But the boundary is still obeyed.

Dependent upon which vowels are used is the second factor that affects the structure of syllables.

Vowels are either vertical or horizontal in shape.

The vertical vowels enable syllables to be written from left to right to the bottom. Essentially, a syllable is written in a clockwise fashion. The vowels are placed adjacent to the consonant.

Horizontal vowels enable syllables to be written from top-to-bottom. They are placed under the consonants.

The vowels , , , , , and ? are “combos” that contain both vertical and horizontal vowels—resulting in each wrapping around a consonant so that it sits above the first vowel making up the combo.

Together, both consonants and vowels take up the top space of a syllable block. The rest of the letters in the syllable occupy the bottom space.

Here are a few examples of how the vowel can affect the syllable structure:

These are the primary factors that will decide how a syllable appears. The visual component to this will make much more sense the longer you speak, read, and write Korean text.

2. The Order of Korean Syllable Letters

Let’s talk about some additional rules regarding the order of Korean syllable letters.

The positions of consonants and vowels in Korean syllables

Consonants and vowels belong in very specific positions within a syllable.

The third and fourth letters of a syllable occupy the “bottom bunk” of a syllable. This position actually has a special name: ? ,bat-chim), which literally and fittingly means “support.”

This order also applies to how you should progress in actually writing the syllable.

The second letter is always a vowel and can be written to the right of, under or wrapped around the first letter consonant.

The fourth letter is always a consonant and will be right next to the third letter. Together, they form the syllable’s ?,

Here’s a nifty graphic to show you how it all works: 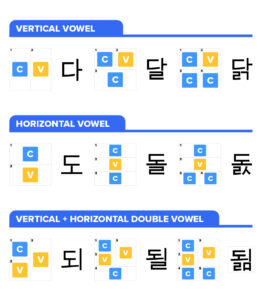 3. The Pronunciation of Korean Syllables

So far, I’ve focused primarily on the written aspect of syllables. But what about actually pronouncing them?

For this guide, I’m focusing on Korean syllable pronunciation that you’ll use more frequently as a beginner learner—based on ?—the one or two bottom consonants of a syllable.

Because the Korean language is syllable-timed, not stress-timed, there’s typically no extra emphasis given to any specific syllable while you’re speaking.

That being said, there are just a few little quirks about syllable pronunciation that are worthwhile to mention. They’re especially important to note if you want to sound like a native speaker.

The special pronunciation of certain

Now, the ? can sometimes be a bit finicky in its pronunciation. Sometimes, you can’t really trust a syllable’s ? when you only hear the syllable and don’t see it in written form.

Here’s this rule in action:

There’s also another pronunciation rule regarding four-letter syllables and ?,

A four-letter syllable has two consonants working double-time as the ?, However, something interesting happens to one of the bottom consonants.

When spoken by itself, a four-letter syllable can sometimes become silent with one of its ? consonants.

So, in the following examples:

Often, it’s usually the second of the ? consonants that’s silent. But there are special circumstances in which the first consonant is silent instead.

So, you wonder, what’s the point of that consonant that’s essentially losing its voice?

Don’t worry, it makes its appearance following a syllable that starts with the silent consonant ?,

The effect of when followed by a silent consonant syllable

The silent consonant ? is actually considered more of a “placeholder” consonant. It doesn’t contribute its own sound. A syllable that has ? as its initial consonant, takes on the sound of the following vowel.

But the rules dictate a consonant must be the first letter in a syllable.

When a syllable is followed by a syllable starting with ?then the first syllable’s ? shifts its sound to that second syllable.

That’s right. One syllable’s ? can effectively manipulate its own sound onto the following silent consonant syllable. In this instance, you’ll want to pay more attention to your pronunciation.

In addition, the silent consonant in four-letter syllables can also make its return.

Here’s this rule in action:

You’ll find the syllables roll off the tongue much more naturally with this rule.

The effect of adjacent to other consonant syllables

Ready for a mind-bending, tongue twister?

If one syllable has a consonant as ?and the next syllable starts with a consonant sound excluding the silent consonant, then the second consonant can have an exaggerated pronunciation.

That’s right. ? once again makes its appearance, even when followed by consonants other than ?,

This is most notable if a syllable’s ? is the same consonant as the initial consonant of the following syllable. Think of it as a “layering” effect.

It’s also quite noticeable when the consonants ?, ? or ? are involved.

The exaggeration itself can seem a bit subtle to the untrained ear. Listening to Korean audio, whether it’s catchy K-pop music or captivating audiobooks, can be very helpful.

And as I mentioned earlier, there are many more guidelines for consonant-consonant interactions.

For instance, if a syllable has ? as its ?and it’s followed by a syllable that starts with consonant ?then that second syllable swaps the ? sound for the ? sound.

Why? Because it makes for easier phonetics but can create more head-scratching for beginner learners.

So that’s the gist of Korean syllables!

The information might seem a bit overwhelming now, but I guarantee that you’ll quickly get accustomed to everything with enough practice. And to build that confidence and skill, you can always check your Korean grammar to help you master the Korean syllable structure more easily.