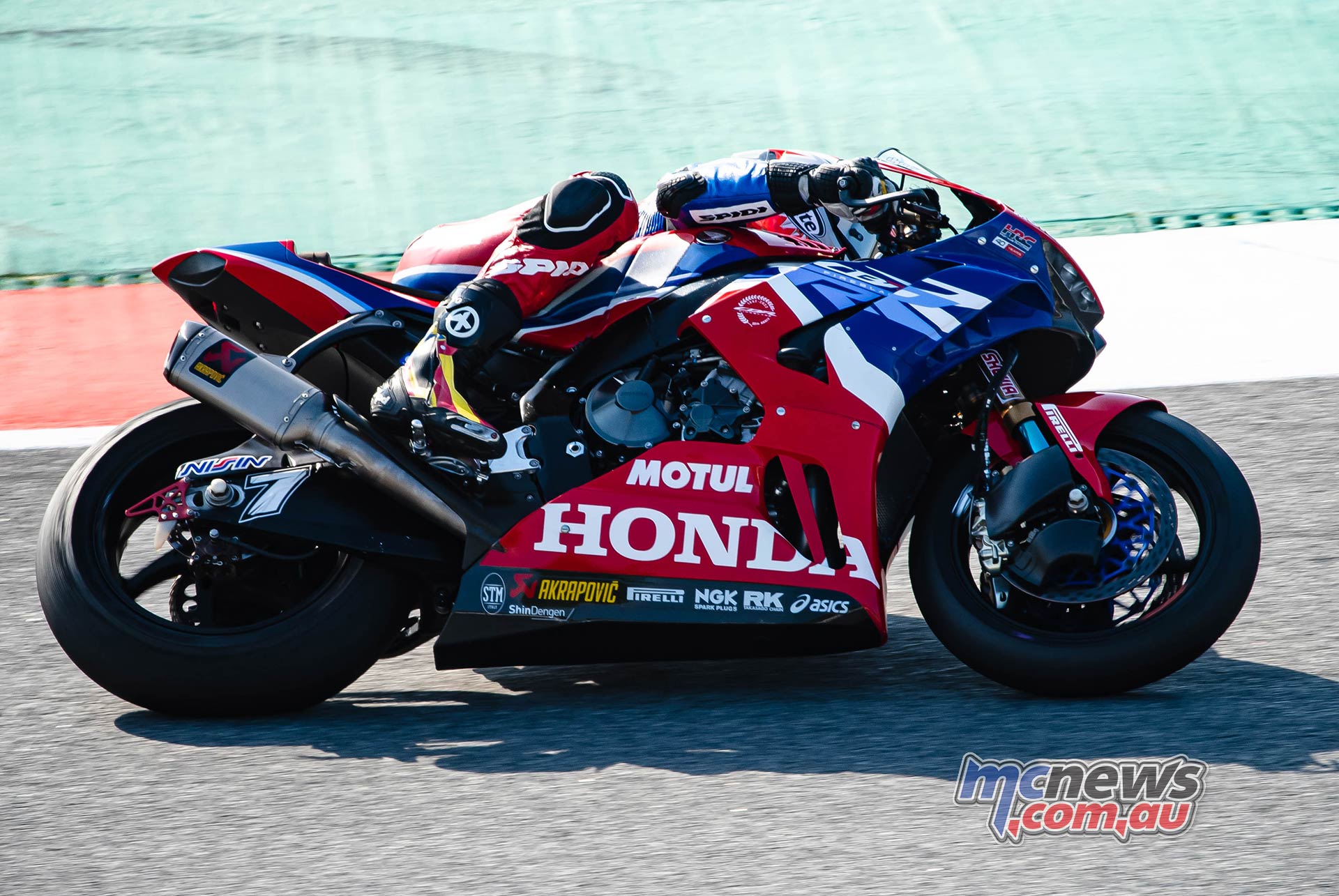 Iker Lecuona (Team HRC) went half a second quicker than anyone else in the morning to top his first session in WorldSBK, albeit using the soft front tyre that debuted last time out. His time was good enough to keep home on top for the remainder of the day.

In the afternoon, Lecuona was slightly further down the field, but it was his teammate Xavi Vierge who was doing all of the time attacks towards the end of the second session.

“P1 at the end of the first day here in Catalunya is a very nice feeling but not a totally “real” result. Having said that, it’s very real that I have good speed, having ridden alone during both sessions and worked well with the team in the garage.

“We put the qualifying tyres in during FP1 because we wanted to collect some data for tomorrow’s Superpole and didn’t want any rain to prevent us from doing that in the afternoon.

“With race tyres, my pace is just around three tenths of a second slower than that of Toprak and Rinaldi. Alvaro is on another level though; his pace is just amazing. I spent the sessions lapping alone and this gives me confidence for tomorrow.

“In FP2 I just worked to prepare for the race, using only one set of tyres, the hard one, and I felt good. But we will see tomorrow, because anything can happen, also considering the unstable weather forecast for the rest of the weekend, which means the track could change a lot and the conditions become trickier.”

Vierge was third for a fair bit of the session as he did numerous fast laps and on one of their race tyre options, having finished tenth in the first session and with the highest top speed at 326km/h. Vierge finished seventh overall, courtesy of his FP2 time.

“It’s a good feeling to be back starting a racing weekend at a track we know, after three rounds at brand-new ones, because we’ve been able to focus solely on ourselves and on the bike setup. So it’s been a positive Friday for us, especially in FP2 because in FP1 we struggled a bit at the beginning with braking. In the afternoon, on the other hand, everything worked perfectly, the team did a great job and I felt really good with the bike. Even using just one set of tyres, I was able to set a very good lap time.

“Our first goal now is to improve in qualifying to try and start somewhere on the first three rows and then of course to finish the races, after two DNFs at Magny-Cours. We know that we have the pace, so finishing the race will translate into a good result. It would be fantastic to score a great result in front of my home crowd.”

As expected ahead of the weekend, the factory Ducatis were in good form. Finishing fourth in FP1, Alvaro Bautista (Aruba.it Racing – Ducati) was quicker in the afternoon session, even if he wasn’t top overall. He spent most of the session on top and led a Ducati 1-2 with teammate Michael Ruben Rinaldi, who was also impressive at the circuit at which he won at in 2021. It was Rinaldi who remained top Ducati from FP1, and he was fourth in FP2, whilst Bautista topped the FP2 session and looked like he had good race pace.

“We did a good job ahead of the race taking into account what the weather variables might be. I’m satisfied with how things went and the feeling I had in both sessions. We were fast even though we didn’t try the time attack and that is a good sign“.

“It was a positive Friday. We worked a lot on tyre choice, tried different tire solutions, and managed to gather some very interesting data. The race pace was incisive and consistent, especially in FP2. We don’t know what kind of weather we will find tomorrow, but we are ready and we have confidence whatever the conditions are.”

It was a solid opening day in Barcelona for the Yamaha outfit of Toprak Razgatlioglu (Pata Yamaha with Brixx WorldSBK) and teammate Andrea Locatelli. Razgatlioglu was third on the combined times but was reliant on his morning time, like Lecuona and Rinaldi ahead of him. He was only sixth in the afternoon session but three tenths from the top time and undoubtedly in the mix ahead of the two race days ahead. Locatelli on the other hand found a solid return to form, finishing sixth overall but third in FP2, just 0.067s from the top time. Can Locatelli play a key role in taking points off teammate Razgatlioglu’s rivals?

“For me, it was a positive Friday because we try every session for a good set-up for the race but tomorrow, I think maybe rain! Anyway, we try some new set-up and we are happy. Okay, we see Ducati is very fast but we keep fighting for the race. In FP2, we tried a new set-up and we are working – also I just try a shorter race simulation to understand the bike how it is working or not.

“Now, it looks like we are ready to race, the pace looks not bad and I hope we are fighting for the win again. At this track, it’s important to keep the rear tyre and I hope for good weather tomorrow but we will see!”

“I’m really happy about today because the feeling on the bike was really good, especially in FP1. In FP2 the condition was a bit different and to do a good lap time was difficult, but actually the feeling was not so bad and I think we have a good base set-up for here in Barcelona – especially after the test in August. We worked really well and were really fast here.

“So today, I’m happy and I have a lot of confidence with the bike, so I want to continue in this way and try to push because tomorrow we have the first race and it is important to try to start in front. I think in respect to the last few rounds, we understand a little bit more around the bike and how to use the new tyre compound. We’re working well and today we have a good reference and data to compare. For me it’s a good point to restart!”

Blasting up the order having been hovering around the top five for a majority of the FP2 session, six-time World Champion Jonathan Rea (Kawasaki Racing Team WorldSBK) took second at the end of the session. The Ulsterman, eager to claw points back in the title race, set good laps at the end of the afternoon session and despite results being mixed there in the past, he has more Barcelona wins than anyone else; in FP1, he had a 325km/h top speed, not a huge deficit to his rivals.

Rea took fifth overall whilst teammate Alex Lowes was only 14th in FP2 but had a lap time good enough for sixth; it was deleted for track limits, leaving him eighth on the combined times.

“We had to compare two front tyres, back-to-back, and two rears. We know this track consumes tyres for everybody. I felt good with my ultimate pace and we just need to improve the consistency. Alvaro is very strong, and it seems they started in a really good way.

“In some areas we need to make the bike a little bit easier to ride, so that when the tyre drops I am not fighting with the bike so much, especially in stopping and turning. We have a few areas to look at tomorrow thinking about tyre conservation in a long race. I did a long run in the afternoon, three laps short of race distance, and the drop was less severe than last year.”

“Overall today was good but we struggled a little bit with front tyre wear after 11 or 12 laps, so this is something we need to focus on. The front grip seemed to drop quite a lot for me. The rear, not so much. I did a really fast lap at the end of the day, but rolled out on the green track limits paint, and I just caught the chequered flag too. I didn’t realise and the next lap was even faster, which would have put us in the top three.

“Our new tyre performance is quite good, but we need to work a little bit on used tyres. But it’s great to be here at the team’s home race. They have lots of people here, friends and family, so the atmosphere is great. I am looking forward to the first race tomorrow.”

It wasn’t the easiest day for BMW, with Scott Redding (BMW Motorrad WorldSBK Team) not able to get on tabs with the top five like previous at circuits. Knowing that it will be a trickier round for the manufacturer given the testing programme that they’ve followed, Redding and the team will hope that they can challenge for the top six. Teammate Michael van der Mark had a technical issue in FP1 but following a change of engine for FP2, was able to get crucial laps under his belt but he could only finish 19th in FP2. Come the end of the day, Redding was tenth whilst van der Mark languished in 20th.

With nine of the top ten places occupied by factory bikes, the only rider to squeeze his way in was the in-form Axel Bassani (Motocorsa Racing), who followed Bautista in the early stages of the session. 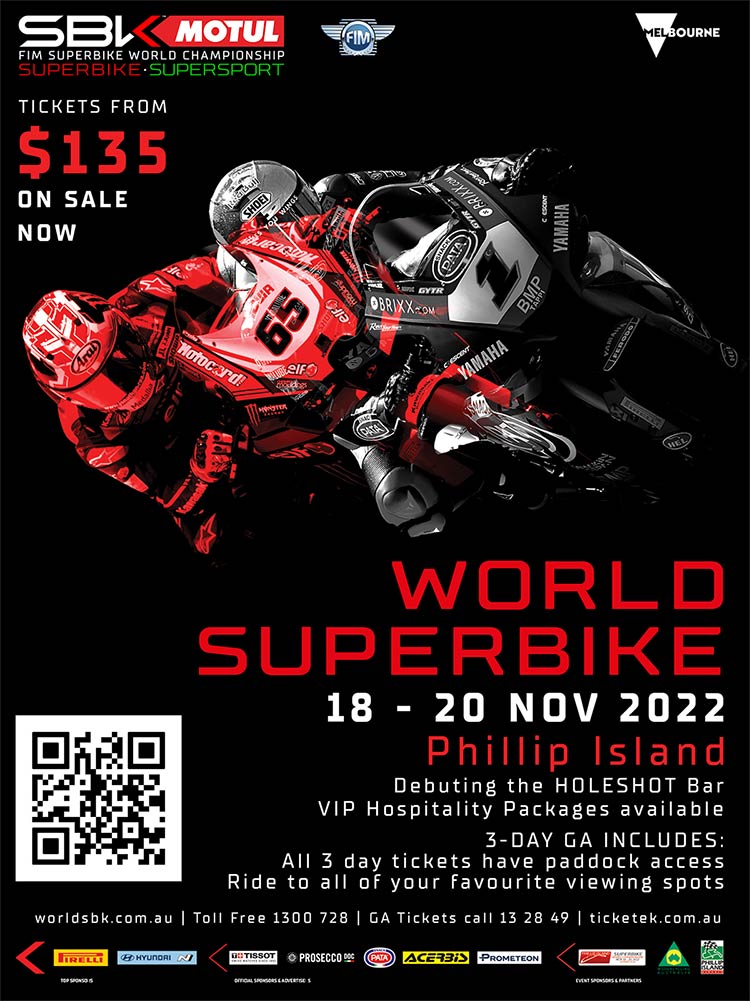 A lack of experience at the Circuit de Barcelona-Catalunya in the FIM Supersport World Championship did not prevent Dominique Aegerter (Ten Kate Racing Yamaha) from setting a new all-time lap record in the Championship during Friday’s Free Practice 2 session on the way to top spot for the Catalunya Round.

After topping Free Practice 1 by three tenths, Aegerter smashed the lap record to finish more than a second clear of his rivals in FP2 and in the combined classification.

“I am happy with how it went today, even though we are in 15th position. We made the time on the second tyre exit. There are still a couple of things to work on, but I’m confident for qualifying.”

Dutch rider Victor Steeman (MTM Kawasaki) posted a 1’55.287s to move himself ahead of two local riders in the combined classification with the Dutchman one of just eight riders to improve their lap time in the afternoon compared to the morning.

While Steeman was able to find around two tenths of a second, Julio Garcia Gonzalez (ESP Solutions Motap Racing Team) and Jose Luis Perez Gonzales (Accolade Smrz Racing) did not improve their lap time and finished second and third in the standings respectively, after wildcard Garcia Gonzalez topped Friday morning’s FP1 session. The trio were separated by around two tenths at the end of Friday’s running.

With very few riders improving their time, Bruno Ieraci (Prodina Racing WorldSSP300) remained in fourth place at the end of the day’s running, ahead of Marc Garcia (Yamaha MS Racing) in fifth and Hugo De Cancellis (Prodina Racing WorldSSP300) in sixth; in FP2, Garcia was classified in 23rd place but his time of 1’55.692s from FP1 was enough to take a top-five finish at the end of the day in the combined classification.