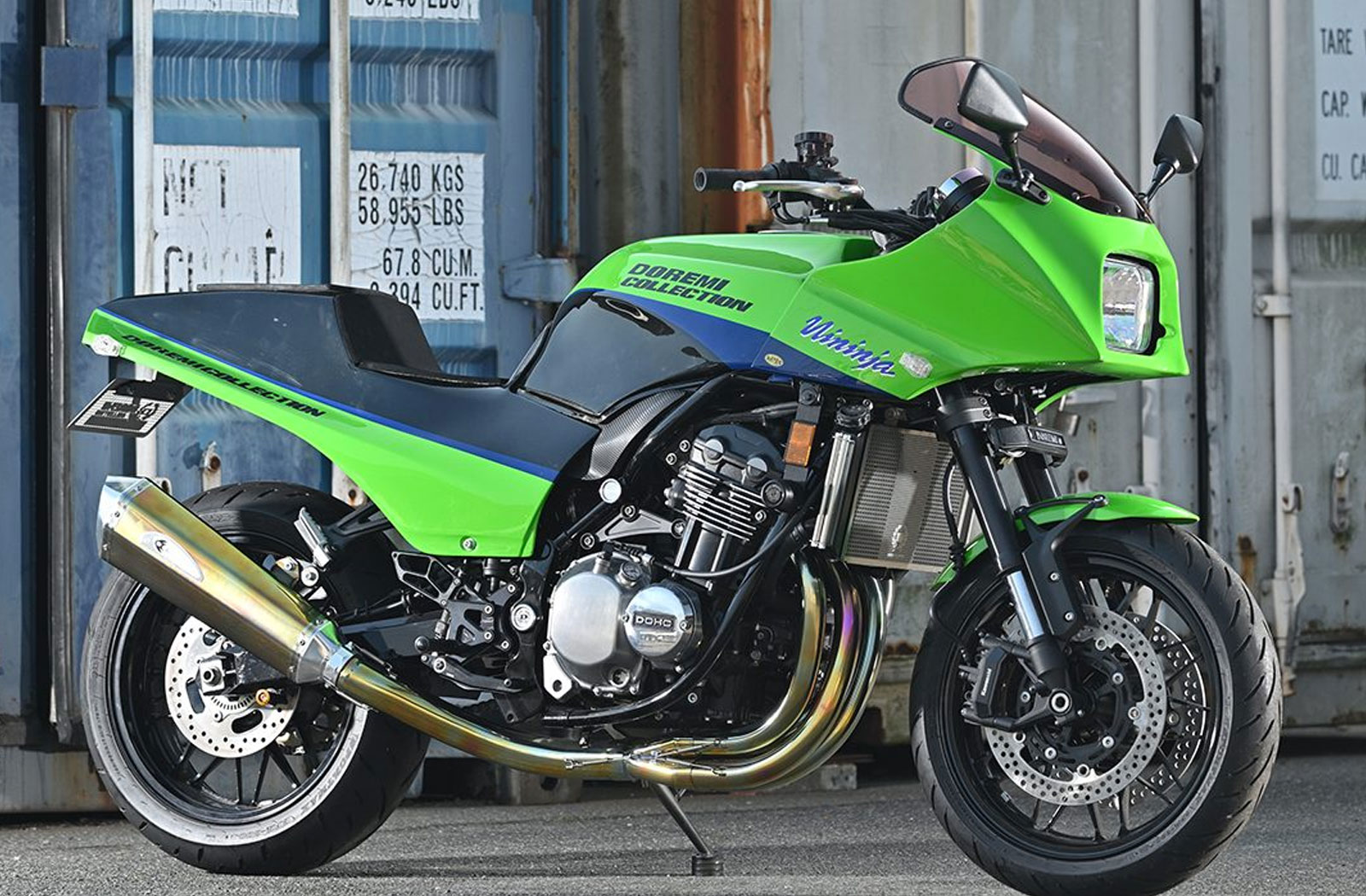 It’s been 4 years since the Kawasaki Z900RS went on sale. In the lead-up to its release, Kawasaki adopted a tactic many manufacturers have taken with models aimed at the retro-loving custom crowd. To build hype around the Z900RS release, Kawasaki recruited a handful of Japanese custom builders to work their magic on the all-new “Retro Sports” motorcycle. The project was called ‘Beyond Z‘ and the workshops involved were Bito R&D, Moto Corse and Doremi Collection. After their unveiling, the Beyond Z project and the production-ready Z900RS were a smash hit, but nowhere has the Z been so popular as the home of Kawasaki, Japan.

After the unveiling of their custom Z900RS creations, each of the 3 workshops released a range of aftermarket parts for the Z900RS which were developed during their Beyond Z builds. However, of the 3 workshops only one has continued to expand on its Z900RS offering in order to satisfy the needs of the Z-obsessed Japanese market. That workshop is Doremi Collection and it’s not just small bolt-on accessories they’ve been coming up with.

Doremi is now producing a range of ‘heritage’ body kits for the Kawasaki Z900RS that completely transform the look of the bike. Similar to Kawasaki’s approach with the Z900RS itself, which was designed as a homage to the 1972 Z1, Doremi has taken inspiration from iconic models of Kawasaki’s past to create these unique body kits.

At the core of the Doremi ‘heritage’ body kit range is a redesigned, 14-litre fuel tank. The steel tank utilizes the stock Z900RS filler cap, mounting points and fuel pump for ease of installation. After it is installed on a Z900RS donor each kit’s fiberglass reinforced tank cover slips over the steel tank to kick off the transformation.

The Doremi Z900RS body kit range consists of 3 variants which include a Z1oooR lookalike, which we’ve previously featured, a GPZ900R Ninja style kit and a Z1-R inspired offering. Here’s a closer look at the Ninja and Z1-R kits and what they consist of… 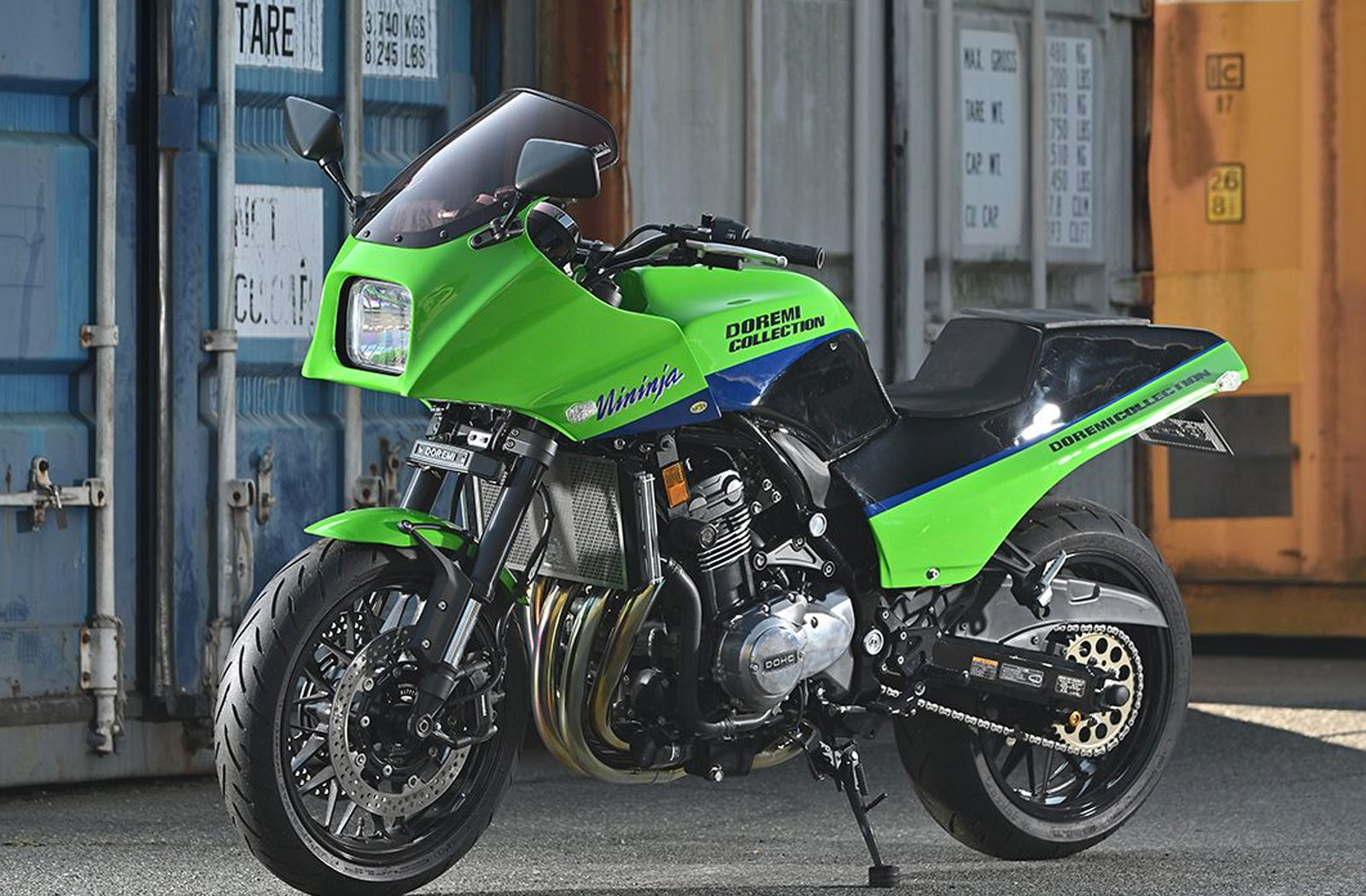 The Kawasaki GPZ900R has once again entered the limelight with the release of the 2022 Top Gun Maverick movie. Back in ’86, when the first Top Gun film was released, every young rider wanted a Kawasaki Ninja like the one Tom Cruise was seen piloting in the film. Thanks to the popularity of both films and the Ninja’s own historic significance, buying a low mileage, good condition, secondhand GPZ900R now requires a significant financial outlay.

The original Ninja 900 was a breakthrough motorcycle in both its styling and performance. Powered by a 908cc inline-four it produced 115 bhp and was the fastest production motorcycle of its time with a top speed of over 150mph. The Ninja earned a reputation as a true race bike in 1983 by dominating the podium, both first and second place, at the 1983 Isle of Mann TT production class. It is also considered the predecessor of the modern sportbike and was the successor of Kawasaki’s legendary Z1. All this made the Ninja GPZ900R an obvious choice for Doremi to recreate, and the Kawasaki Z900RS offered the ideal platform.

Now, thanks to Doremi, you can own a GPZ900R lookalike that oozes classic Ninja style but boasts all the benefits of a modern motorcycle. Designed to fit the standard Z900RS the GPZ900R heritage kit comes with a 14-litre steel tank which is a direct replacement for the stock item. The Ninja-style FRP bodywork, which attaches to the Z900RS using standard fixing points, is made up of a fuel tank cover, tail unit and front cowl. The kit also contains Ninja style lighting in the form of a rectangular H4 headlight and a clear lensed integrated brake light and flush mount turn signals. Other GPZ900R era styling touches come in the form of replica mirrors and retro engine point covers.

Along with the visual enhancements Doremi has also included a few functional upgrades in the GPZ900R heritage kit. These include a complete K-factory titanium exhaust system with a hexagonal muffler and purposeful engine crash guards. 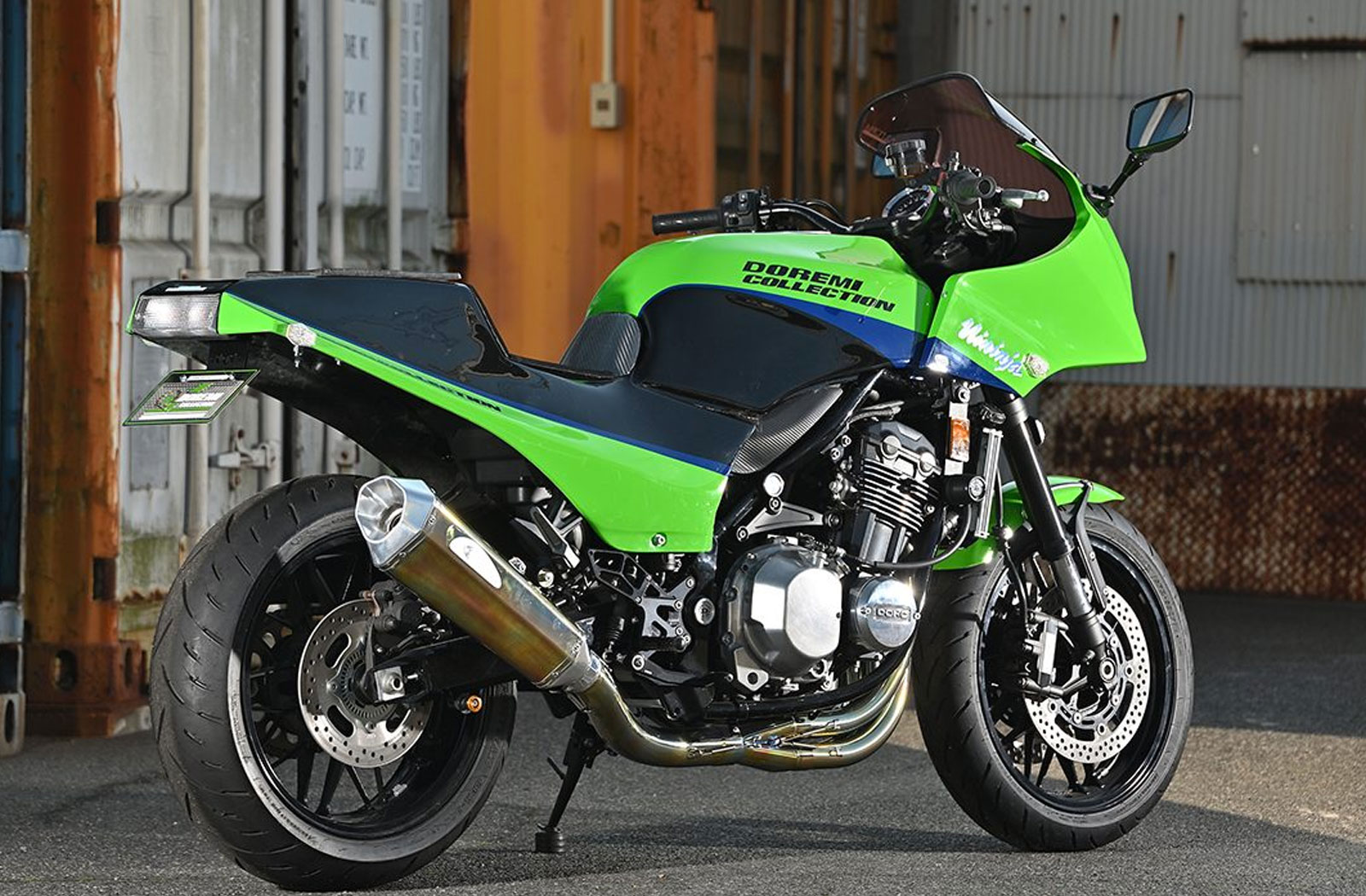 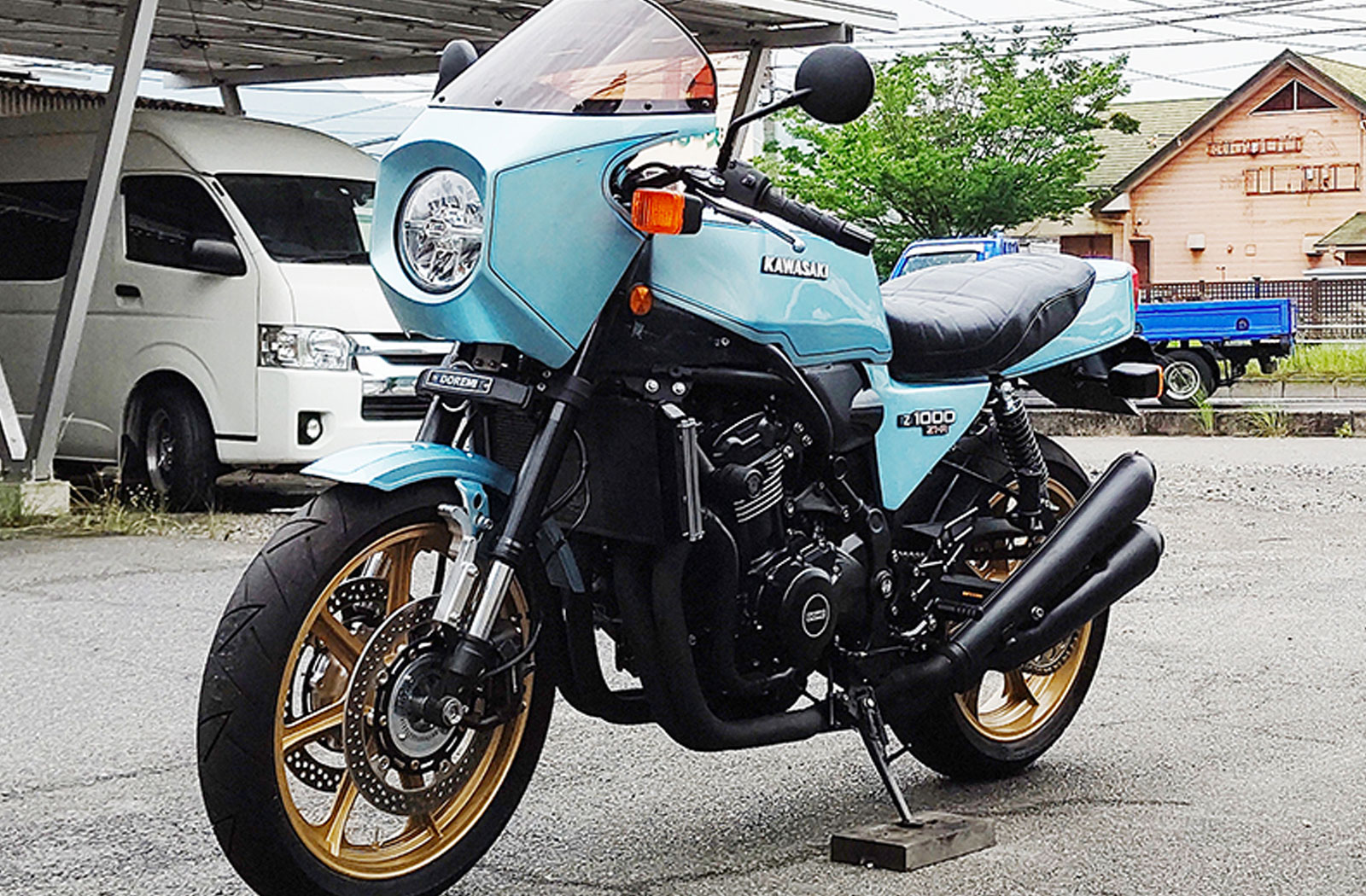 The angular younger brother of the Z1, the Z1-R is considered the first Japanese production cafe racer. Kawasaki pitched it as an evolution of the Z1 platform but behind the fancy new bodywork, it was essentially the same bike. In terms of sales, the Z1-R didn’t get quite the response Kawasaki had hoped for. This was mainly due to the fact the KZ1000’s ageing engineering was outgunned by its competitors. However, despite its lacklustre showroom performance the Kawasaki Z1-R has become one of the most desirable Zeds ever made.

Leveraging the cult status of the Kawasaki Z1-R Doremi has faithfully recreated the bike with this comprehensive body kit for the Z900RS Cafe. The new kit features angular bodywork that mimics the look of the 1978 Z1-R. Finished using the same unmistakable metallic blue/silver paint scheme it’s about as close to owning the original as you can get without having to sell a kidney.

Similar to the other Doremi heritage kits, an essential component of this conversion is the 14-litre Z900RS steel fuel tank. Sitting over the tank is a Z1-R FRP replica tank cover wearing classic Kawasaki badges. Surrounding the front end is a replica Z1-R bikini fairing and it’s accompanied by a matching Z1-R tail unit and triangular side covers. To complete the look Doremi has also recreated the Z1-R seat and swapped out the Z900RS plastic fender with a hard-edged steel one.

On top of the accurately reproduced bodywork, Doremi has included several other Z1-R style components that make this conversion even more convincing. The kit includes a full set of boxy 1970s turn signals, large rectangular tail light and pair of faux twin rear shocks. The gold rims are Morris Mag replicas and the engine has been dressed using retro points covers.

The bike in these photos is also running a Doremi Z900RS 4-into-4 exhaust system, like that found on the original Z1. This setup was swapped for a 4-into-1 system on the 1978 Z1-R, but you won’t hear any complaints from us about that oversight. 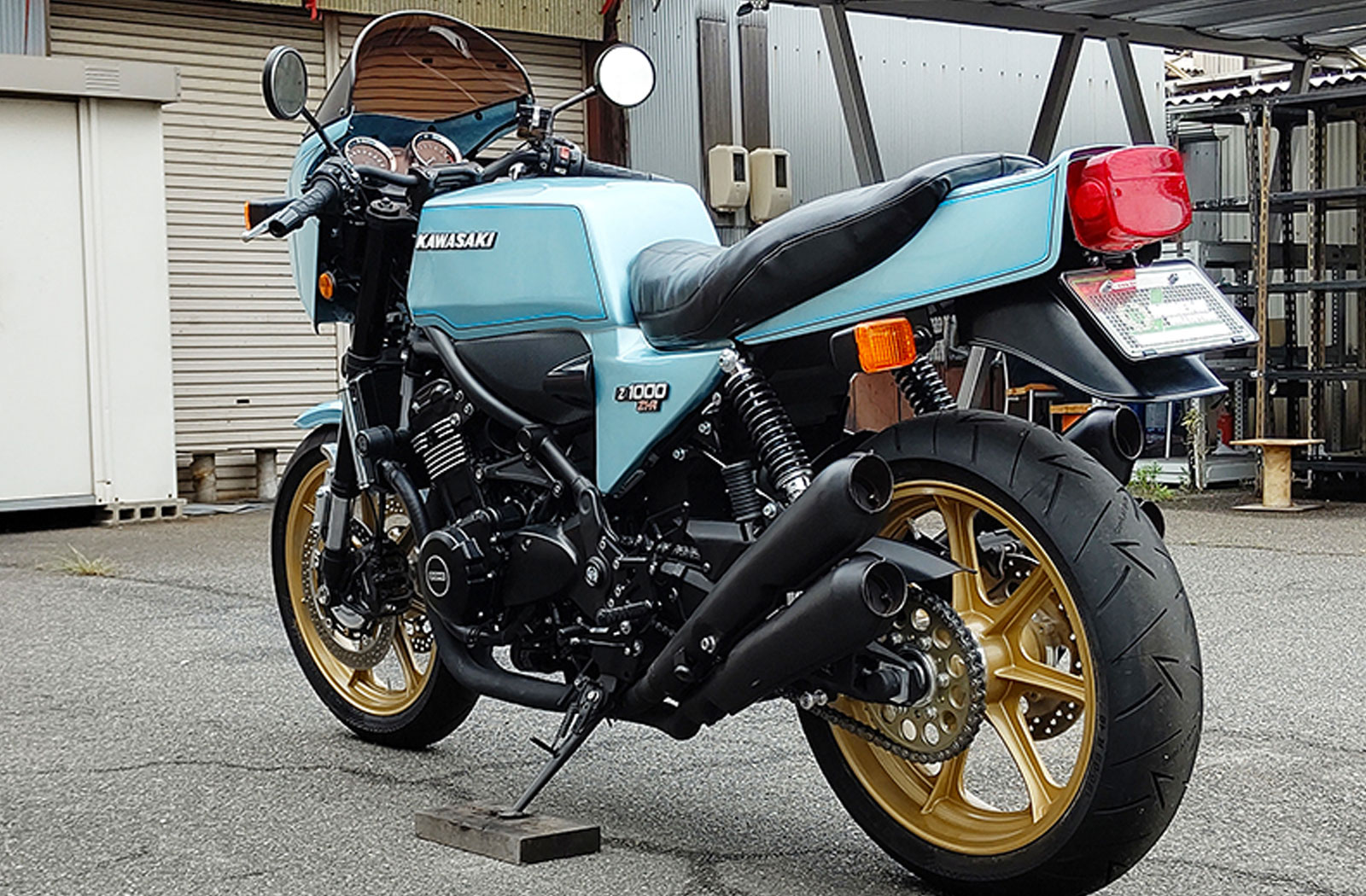 If you’re chasing the classic look of these iconic machines with all the benefits of modern engineering and technology a Doremi Z900RS heritage kit could certainly scratch that itch. Each kit is made to order and Doremi are currently accepting reservations.

Pricing for the Eddie Lawson Z1000R kit starts at 418,000 Yen which is roughly $3,150 USD. The GPZ900R kit starts at 440,000 Yen ($3,300) but Z1-R kit pricing hasn’t yet been announced. Doremi also offers an installation service for local customers but overseas customers need not be too concerned about the complexity of the installation. Each kit comes with all the brackets and hardware required to install it and it is a completely bolt-on solution – meaning there’s no need to modify the Z900RS frame in any way.

Now all that’s left is simply a matter of picking which classic Kwaka you like the most. 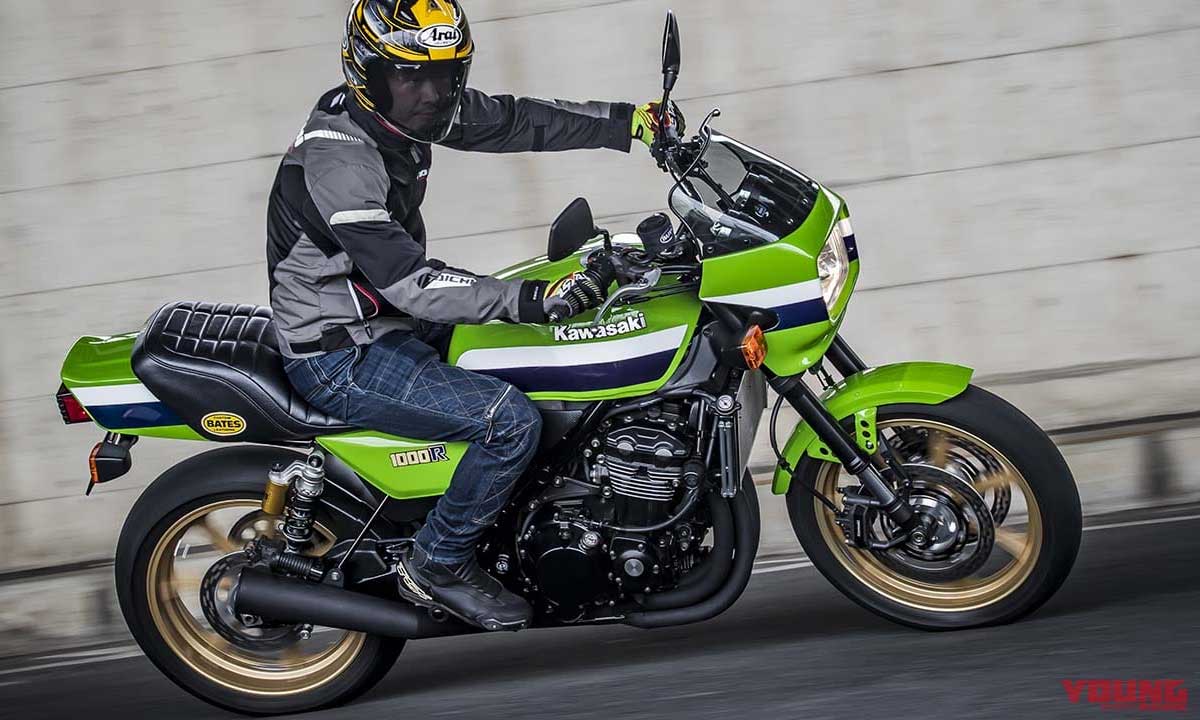