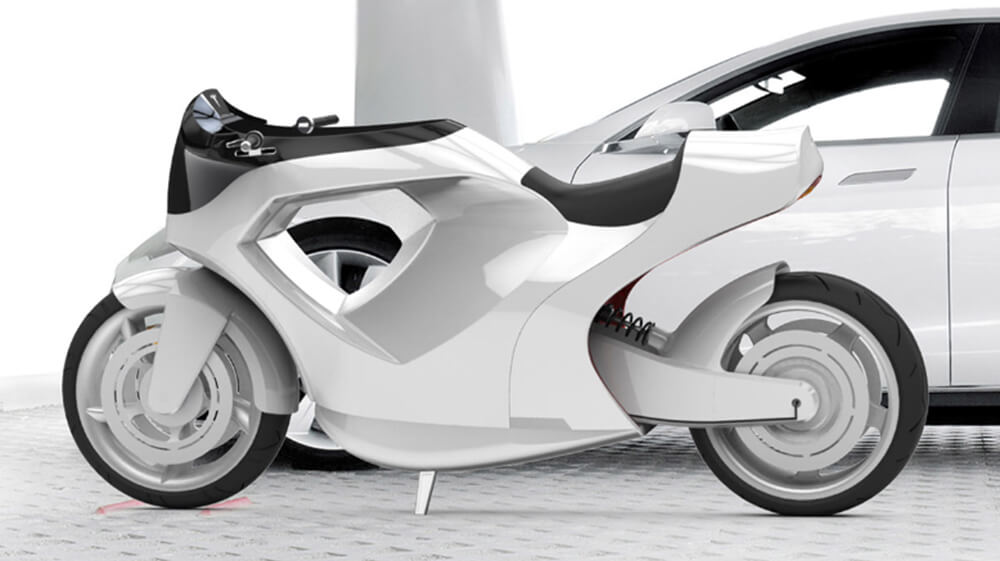 Ever since Tesla’s inception, EV enthusiasts have been anticipating the announcement of a fully electric motorcycle from the EV innovator. Tesla motorcycles have been requested time and time again, and concept designers have provided all kinds of possible forms for this long-awaited electric ride. But is Tesla really considering a two-wheeled EV in 2023? What are the specs of the Tesla motorcycle? When can we see a production Tesla motorcycle?

In today’s post, we’ll cover both what we know and what we speculate about the Tesla motorcycle and its potential production run. Later, we’ll discuss whether or not you should wait for Tesla to put the motorcycle into production, and which alternative budget-friendly Tesla alternatives you can consider now.

For the sake of full disclosure, we’d be remiss if we didn’t mention Elon’s personal stance on motorcycles at the beginning of this article. Answering a question from an investor in 2018, Elon tried to end speculation about whether Tesla would ever make an electric motorcycle:

“I actually rode motorcycles when I was a kid. I was into dirt biking for like 8 years or something. Then I had a road bike until I was 17 when I was almost hit by a truck so we started riding motorcycles Not going to. (Tesla Shareholder Meeting, June 5, 2018, Available here) The motorcycle question on Tesla’s video starts at 1:11:38,

While this seems like a pretty definite answer to the question of whether or not Tesla will make a motorcycle, Elon has also been known to change his mind from time to time. And while Elon may have personal reservations about the safety of the motorcycles, the public’s desire for a more affordable EV solution than Tesla’s lowest-priced — currently the Model 3 — is still very high. We know that speculation about the Model 2’s price and release date stems from the same need for affordability.

With that out of the way, let’s talk specs:

For Tesla’s motorcycle, affordability will probably be balanced against performance. After all, who buys a state-of-the-art electric motorcycle from a tech-savvy automaker to get from point A to point B without some fun in between?

Assuming that Tesla manufactures an electric motorcycle called the Model M (or call it something else, since the Tesla acronym S3XY CARS gets weird if you add an M), here we go through its body type, features, and specifications. And what to look for in battery range.

First off, we’d expect the Model M to follow in the footsteps of the rest of Tesla’s lineup, the first bike to deliver as much speed, comfort and range as Tesla’s engineering department can wring out of a two-wheeler package. For this reason, the Model M (at least in the first release) will likely have a sport touring design, maximizing comfort for touring without sacrificing speed and handling.

For example, the 22.5 kWh battery in the Energica Xperia (an electric motorcycle we believe would qualify as a Tesla competitor) provides about 130 miles of range at highway speeds. While the Xperia’s battery capacity is on the large side for an electric motorcycle, we’d expect a similar size for any potential Tesla Moto, somewhere between a 20 and 25 kWh pack.

Can Tesla engineers figure out how to make an electric motorcycle with 300 miles of range on a 20-25 kWh battery pack? We would like to think so; At that point, a Tesla motorcycle would equal the longest range even for ICE motorcycles.

As far as the Model M’s potential charging speeds are concerned, Tesla’s current charging technology standards should apply to any EVs produced over the next few years. We would expect to see Tesla Model M charging times of around 30-45 minutes on the Supercharger and 44 miles of range per hour on the Level 2 home charger. A trickle charge time of around 10-20 miles of range per hour would likely be enough, which gives you somewhere between half and full range on an overnight charge.

What about 0-60 time and top speed? We can’t imagine Tesla giving the Harley-Davidson LiveWire One faster acceleration, so the Model M will probably have a 0 – 60 mph time in under 3 seconds. Top speed will likely be less impressive, but only because Tesla limits that factor on its vehicles. We wouldn’t expect the Model M to exceed 175 mph; More likely, the top speed limit will be set at a conservative 125-150 mph to protect battery range.

Lastly, will the Tesla Model M motorcycle come with some version of Autopilot? Honestly, probably not. Motorcycles take a lot of human input, which is why many riders are attracted to motorcycles in the first place. To make a truly autonomous motorcycle, Tesla will have to sacrifice economy for safety, space for on-board electronics and additional loss of range from additional equipment. These are all things that can be done much more easily inside a four wheeler. But a scaled-down version of Tesla’s software that only provides information and imaging to riders could be beneficial.

With all these specifications in mind, let’s move on to Model M pricing:

How much will the Tesla motorcycle cost?

A potential Model M would enter a somewhat saturated market for electric motorcycles, so it probably wouldn’t fall into the category of the least expensive ($5,000-$6,000 Sondors Metacycle or the under-$3,000 CSC City Slicker). Presumably, one will go on to compete with the likes of Tesla Model M Harley Davidson Livewire OneWhose MSRP is $22,799.

On the other end of the spectrum, the Arc Vector, which hews very close to what we’d optimistically expect on a Tesla Model M, costs as much as a new Model S (the Vector has an MSRP of around $120,000).

A more fair competitive comparison for price and features might be the Energica Xperia. With an MSRP of 23,750 and a prudent option to buy a 5-year battery warranty for $1000 more, the Xperia falls into the upper-mid range of prices for electric motorcycles. with xperia prices As a baseline, a potential Tesla Model M motorcycle would probably cost closer to $25,000 or more, given the range and performance features we’ve already discussed.

To help with affordability, will the Tesla Model M electric motorcycle be eligible for the clean vehicle credit? While this would potentially meet pricing and sourcing norms and arguably satisfy the “other vehicles” clause in the law, commentators on the new laws say electric motorcycles have been left out. We expect them to be included in future amendments to the law (2023 and beyond), but as of 2022, the federal credit for electric motorcycles expires.

If Tesla decides to pursue the electric motorcycle market, how soon can the Model M be produced? Let’s take a look at a possible timeline:

We’ll be honest, with Tesla still working on production of the Cybertruck and Semi and trying with the rest of the auto industry to overcome production delays due to global shortages, we don’t see them launching the new motorcycle line. How to make room for Sometime in 2022, 2023 or 2024. Even if Elon suddenly changes its mind about electric motorcycles, it’s unlikely that one will hit the production line until 2025 or later.

If Tesla Motorcycles ever gets the green light, though, Tesla has proven they can and will turn around quickly when necessary. With the manufacturing experience Tesla has gained through more than a decade of mass producing EVs, creating an electric motorcycle line wouldn’t be too difficult a task for them to tackle head-on. If the decision is made in the next year or two, it would be unsurprising to see a Tesla motorcycle rolling off the assembly line by 2025.

Is it Worth the Wait for a Tesla Electric Motorcycle?

Waiting for Tesla to come out with a product that Elon himself declined to consider and would require a new production line of its own doesn’t seem like a wise option at this point. However, we think it’s worth keeping an eye on.

In the meantime, It would probably be helpful for you to do a quick self-evaluation to determine what exactly you need from a Tesla motorcycle. Is it less energy use for travel? Are you looking for a low cost EV solution? A fun way to spend your weekend? Or are you a Tesla fan and motorcycle enthusiast who wishes your favorite mode of transportation had a touch of Tesla?

If green energy use, low cost, and Tesla technology are the reasons you are looking for a Tesla Model M motorcycle, then we would like you to stop and consider one. used model 3 or a Used, Old Generation Model S, While they don’t offer the solo freedom of the open road that a Tesla motorcycle would, you can enjoy them at prices we can expect to see in the new electric motorcycle market, but with better range (and all-weather use). ) with. Then, if Tesla changes its tune on electric motorcycles and you get the chance to buy a Model M—or Model Z, Tesla Moto, whatever they decide to name it—you’ll already have that to trade. There will be a vehicle.

If you’re ready to find an electric motorcycle in the next year or so, check out some of the brands we mentioned earlier (like SONDORS, Energica, and the LiveWire lineup).