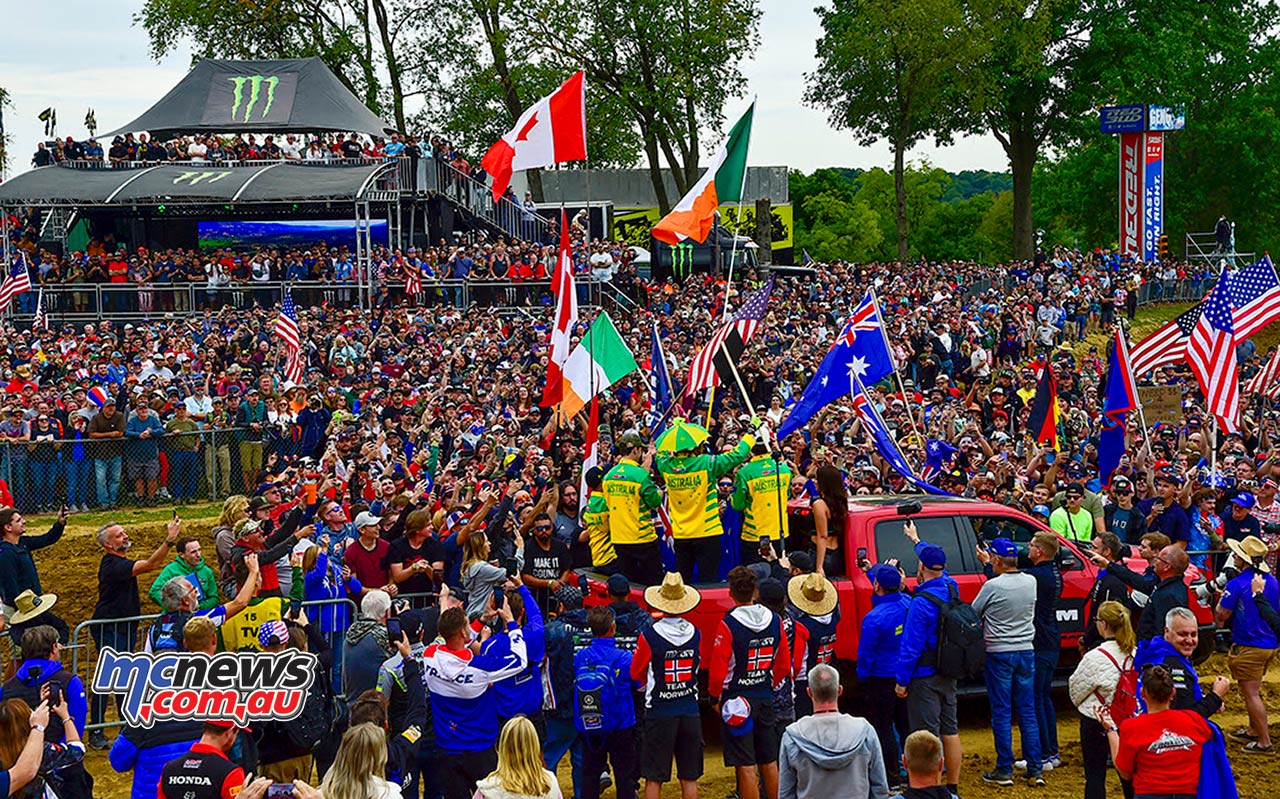 The second half of the media day at the Monster Energy FIM Motocross of Nations in RedBud, concluded with a special press conference which announced a special addition to the FIM Motocross World Championship followed by the Teams Press Conference and the Teams Presentation to a huge crowd of Supporting American fans.

The afternoon activities began with the presentation of Triumph Motorcycles, who announced that from 2024 they will enter the FIM Motocross World Championship in the MX2 and MXGP categories with the new Triumph Racing Team.

Following that, another press conference took place to present the top nations at this year’s event. This included Team Italy, Netherlands, Great Britain, France, USA, Belgium, Switzerland, Australia and Spain, as well as the newly introduced FIM Europe and FIM Latin America teams. Each squad shared their expectations and hopes for the 75th edition of the biggest off-road race of the season.

Defending Champions Team Italy with Antonio Cairoli, Andrea Adamo and Mattia Guadagnini will run the #1, #2 and #3 plates this weekend, as they will look to keep hold of the Chamberlain Trophy for the second consecutive time.

,I really wanted to race with the #1 plate and we are also in America this year which is even more special. We will try to do our best and the podium is definitely the goal for us,

Team Netherland’s Glenn Coldenhoff reminisced on his success at the event in 2018 and shared his motivation for this year with Team Netherlands saying “I’m feeling good coming into this weekend. I did some training last week in Florida and I am feeling really strong. Obviously, I am motivated, especially last time I was here. I have some good memories, so I’m looking to do well here,

Meanwhile, the home heroes Team USA, who are the big favorites to win here on home soil have a lot of motivation and it could be the year that the nation claims their 23rd victory.

,We have a redemption round if you want to call it that. 2018 wasn’t good at all, but we’re here and we’ve got a lot of confidence in our team,

Team Australia have all eyes on them as Mitch Evans, Hunter Lawrence and Jett Lawrence have a real shot at gifting their nation their very first Chamberlain Trophy.

,We’ve all been on the world stage for a few years now, so we know how it works now and all three of us have had a really good year and certainly we are in a good position to fight for the podium and if not, the win,

,It would be awesome [to be on the podium or win] and it’s something you always dream of, especially for your country, it’s even more special. I believe we have an amazing team and we’re very capable of getting on the podium. Would be cool to top off Australia’s best result,

Then it was time to introduce this year’s teams from the 34 nations that will take part in the battle for the Chamberlain Trophy this weekend. Each country showcased the three riders who will represent them at the 75th Monster Energy FIM Motocross of Nations as they took a tour on the start line in front of an enthusiastic crowd of American fans in the RAM 1500 Rebel, 1500 Limited and 2500 Power Wagon trucks .

The Team Presentation started with the 34th team which was FIM Europe and wrapped up with the defending champions Team Italy followed by the hosting team, USA, who were urged on by their home supporters who are hoping to see the trio back on the top step!

The official ballot to determine the starting grid for the qualifying heats also took place and the draw saw Team Morocco get the first gate pick, meanwhile, home heroes Team USA will line up 15th while defending Champions, Team Italy will take gate six. Team Australia will be 23rd in line.

The main racing gets underway on Sunday.