Authors of
today’s Ramble report: Linda. Comments, edits, and suggestions for the report can be
sent to Linda at [email protected]

Link
to Don’s Facebook album for this Ramble. All
the photos that appear in this report, unless otherwise credited, were taken by
Don Hunter.

Reading: This is the reading from the September 30, 2021 ramble that focused on grasses — an excerpt from An Almanac for Moderns, by Donald Culross Peattie:

How much of any landscape is due to the grasses is a quality in scenery
that the best descriptions rarely admit….It is in autumn that the grasses hereabout come forth in their full
beauty; they fill the meadows like some fluid till they are become
wind-swirled living lakes. But above all they give the meadow scene its
dominant color. There is not one of our sterile upland fields or
abandoned farms where the beard grass, Andropogon, does not show its
soft terra-cotta sheaths, its glaucous blue stems, and woolly gray puffs
of downy seed half bursting from the spike. The misnamed redtop troops
across the fields, its purplish stems standing rank to rank, the
panicles turning a dull gold as the seeds fall, reflecting the mild
sunlight of hazy Indian summer mornings. In the woods and old fields the
Indian grass has begun to bloom-as enchanting as any flower that, can
boast calyx and corolla, with its golden brown spikelets, its dangling
orange anthers, the whole plant turning to a sun-burnished bronze in its
old age.

Kathy
brought in several plants from her permaculture garden to illustrate how she is creating an ecosystem that includes plants and their co-dependent insect species. Even Dog-fennel, which is loaded with defensive compounds, is supporting a caterpillar that is defoliating the plants. It is possibly the Salt Marsh Caterpillar, which, despite the name, is found throughout Georgia. Unharmed by these natural pesticides, the caterpillars ingest the compounds and pass them along to the adults, which become toxic or
distasteful to birds and other predators. She also brought a skeletonized goldenrod. “Everything gets eaten by
somebody,” she said. Roger attested to the insect-repellent qualities of Dog Fennel – when he was growing up in southwest Georgia and working in the peanut fields, they would stick Dog Fennel
in their caps to keep away gnats. Someone else reported that there
is a commercial hybrid of Dog-fennel – ‘Elegant Feather’ – that is sterile and does not produce seed. The name comes from the practice of strewing the plants in dog kennels to repel fleas. Studies have shown that essential oil extracts from Dog-fennel are more powerful than the commercial insecticide malathion.

Linda brought in a specimen of Johnson Grass, in the genus Sorghum, one of the top ten most noxious weed species globally. It grows throughout Georgia in disturbed areas such as roadsides, pastures, and abandoned fields, and is resistant to the herbicide glyphosate. Originally introduced as a forage grass, it was later discovered to contain enough hydrogen cyanide to kill cattle and horses if eaten in large amounts. Linda brought in the specimen since Johnson Grass can be confused with two other large grasses, the natives Silver Plume Grass and Yellow Indian Grass. Though their seed heads are dissimilar, all have large leaves with stout, white midveins.

Janisse Ray will be speaking at the Georgia Museum of Art —“The Art of a Place Called Longleaf” — on Thursday, November 17, 5:30. Admission is free but you have to reserve a ticket here.

Today’s
Route: We
left the Children’s Garden arbor and headed toward the powerline right-of-way through
the Shade Garden, turning north into the Elaine Nash Prairie, then turning south through the prairie restoration area and the lower,
floodplain portion of the right-of-way.

A Brief Introduction to Warm Season Grasses in Georgia’s Piedmont

Grasses
generally fall into one of two groups.

Cool season grasses have their peak growth and flowering in spring, then stop growing in the heat of summer. They often have a second growth flush in the fall and remain green and photosynthetic during the winter.

Warm
season grasses have their peak
vegetative growth in midsummer; they thrive at temperatures of 90-95⁰ F. They flower in late summer and early fall, and rarely overwinter. With a couple of notable exceptions, all the grasses we looked at today are warm-season.

Grasses also fall into one of two growth forms:  Sod-forming
grasses form a dense turf by an extensive web of rhizomes or stolons; they grow so densely that there is little room for birds, small mammals, or insects to move around. They are typically shallowly rooted. All
lawn grasses in Georgia are exotic turf grasses, e.g. Bermuda grass, Kentucky Bluegrass, St. Augustine, Zoysia, Fescue, etc.

Bunch
grasses form tufts, tussocks, bunches, or clumps. Their tufted
growth form leaves patches of bare soil between clumps that allow animals to nest, travel, and feed on dropped seed. Bunch grasses are typically deeply rooted. In the graphic below, the deepest roots are at 15 feet below the surface. All of Georgia’s native grasses are bunch grasses, though it is unlikely that any Piedmont grasses are able to penetrate the clay subsoil to such depths.

River Oats is a good grass to learn from – most of its parts are visible without magnification. The “fish-on-a-pole” dangling at the tip of a slender stalk is a cluster of flowers called a spikelet (in many species of grasses the flower cluster is more or less spike-shaped.) The River Oats spikelet is oval and flattened; it’s composed of 6-17 flattened florets (grass flowers are so small and so different from other types of flowering plants they are called florets). Each floret contains tiny structures that are roughly analogous to the sepal and petal of “normal” flowers, plus pollen-producing stamens and an ovary-containing pistil. All grasses are wind-pollinated so they don’t need to attract pollinators with bright colors or enticing smells. They do need to have their reproductive parts prominently exposed to passing wind currents.

River Oats is actually a cool-season grass that flowers in late spring; the spikelets persist on the plants and drop their seeds in late summer and fall.

Big Top Love Grass has a large, airy seed head up to 3 feet tall and 16 inches wide, held at the top of a short stem. The spikelets are very small, about 1/10 of an inch long, and are held at the tips of stiff, wiry branches.  Each spikelet has only 2-6 florets.  Leaves are held at ground level.

There’s a lot to love about Love Grasses (genus Eragrostis), one thing being their seed dispersal method: in late fall, when their stems dry, the large seed heads break off and tumble across the landscape, scattering seeds. Another is that their delicate branches catch the dew in the early morning; before the sun burns the dew off, a mass of these plants looks like a cloud floating along the ground. A sister species, Purple Love Grass, forms a smaller but even more glorious pink mist.

Purple Top, aka Greasy Grass, also has a red or purple cast to its seed head but it  would never be mistaken for Purple Love Grass. Its stem is tall, erect, and topped by a pyramid-shaped seed head. The branches of the seed head arc gracefully downward, bearing numerous spikelets coated with red or purple wax. If you pass the seed head through your closed fist, the greasy coating will stain your palm.

Panic Grasses are really tough to identify but a common Georgia Piedmont species, Beaked Panic Grass, is relatively easy, distinguished by the tiny beak at the tip of its spikelet.

Although Panic Grasses have been causing breakdowns among botanists for at least two centuries (there are more than 450 species worldwide!), the genus is not named for a nervous condition, but derives from the Latin root word ‘pani-‘ meaning bread (thanks, Avis!). Some species of Panicum were crop plants in antiquity, including millet (Panicum miliaceum), domesticated about 10,000 years ago.

Silver Plume Grass
is the largest grass in the Nash Prairie. Once it reaches flowering size it is easy to identify. Its stems are stout and
5-10 feet tall, topped with a silvery-pink fan of flowering spikes that
eventually mature to a large, tan, fluffy plume. 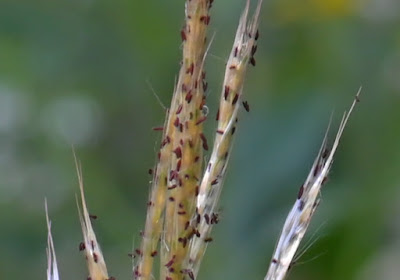 The wide leaves of Silver Plume Grass have a thick white midvein resemble those of the evil Johnson Grass but Silver Plume leaves have a patch of hairs at the junction of sheath and blade.

Perennial Foxtail Grass is a
native Foxtail that lives in clearings, ditches, and other disturbed areas, especially in
wet areas. Its seed heads are spikes densely packed with many spikelets and
many white bristles. It is distinguished from the exotic and invasive Yellow Foxtail which
has yellow seed heads.

Yellow Indian Grass may be the Piedmont’s most beautiful grass. Its vegetation is lush and bluish-green, its stems are robust, and its seed heads are a rich, glossy,  orange- or golden-yellow. It is another Johnson Grass look-alike, at least in its leaves, but has a funny little ligule that resembles either a pair of terrier ears or a gun sight, depending on your life experience.

The beard grasses – which in our area of the eastern Piedmont means Broom-sedge, Split-beard Bluestem, and Little Bluestem – are just beginning to flower.

The stems of Split-beard Bluestem and Little Bluestem look alike – both have bluish-green leaf sheaths and reddish stems, creating a striped look on the stem. Once they flower, these two species will be easy to tell apart.

Smut Grass, so named because of a black fungi (Bipolaris spp.) that coats its seed head and upper leaves, is found sparingly throughout Georgia. Because it is inconspicuous, this species is rarely documented in plant surveys and is probably much more widespread than currently thought. It is native to the New World tropics.

There’s a lot going on besides grasses in the right-of-way this week. Here’s a gallery of Don’s plant photos from this week’s ramble…

The wingstems and crownbeards in
the genus Verbesina are at peak flower now.