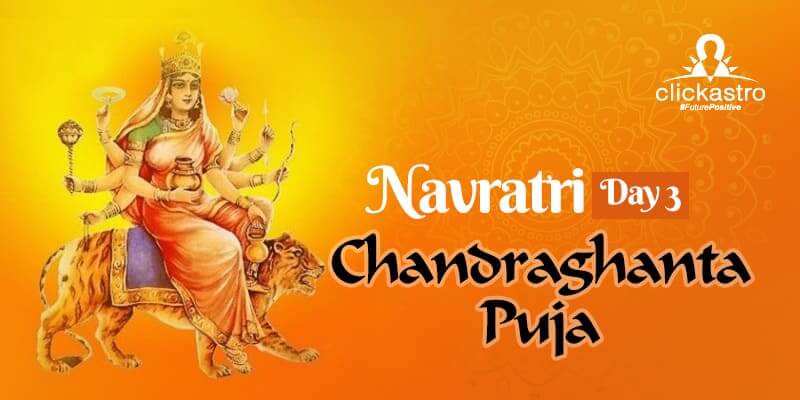 The third day of Navratri is dedicated to a particular manifestation of Goddess Adi Shakti. Chandraghanta incarnation of Navdurga is worshiped on this day. Chandraghanta Devi is known as the goddess of spiritual and inner strength. After marrying Goddess Parvati, Lord Shiva adorned the forehead of the Goddess with Moon (Chandra) made of sandalwood (Sandalwood) and thus Goddess Parvati is also known as Chandraghanta. Goddess Chandraghanta is believed to drive away issues and small demons from our lives. She is depicted with ten arms and three eyes as well as the crescent of Shiva on her forehead. She is golden in color and ready for battle. She wears a garland of bells. She rides a tiger and protects her devotees, while also bringing peace and bestowing supreme grace. She wears a crescent moon on her head and holds a big bell or bell. It is believed that Goddess Chandraghanta rules over Venus.

We pray to Goddess Chandraganta on the third day of Navratri. Chandraganta, the goddess whose forehead is adorned with a crescent moon shaped like a temple bell, known as Ghanta. What is the origin of the name Chandraganta? How did Goddess Durga take another avatar in this form? Goddess Durga had taken birth as Sati in her previous lives and immersed herself during the Yagya organized by her father Daksha. He was then reborn to Himavan and Mena, the gods of the mountains. According to legend, Himavan and Mena performed severe penance and prayed to Goddess Durga, who was then born as their daughter Parvati. On the advice of sage Narada, Parvati performed severe penance to win the love of Lord Shiva and after rigorous penance, Lord Shiva agreed to marry her. On the other hand, Lord Shiva was broken after losing Sati. He didn’t care about anything anymore. As a result, when he reached Himavan and Maina’s house for the wedding ceremony, he looked very scared. His hair was tangled, his body was covered with ashes, and snakes were all around him. His presence horrified everyone who had gathered for the wedding. So much so that his procession consisted of ascetics, ghosts and ghosts. Seeing the form of Lord Shiva, Himavan and some of Mena’s relatives fainted in complete terror. Parvati became sad and frightened on seeing him. But she did not want to give up, not now, not after such a hard penance. So, she too assumed a terrifying presence. She was huge, perched on a tiger, and grew into ten arms, each holding a different object. He had a trident in one hand, a mace, an arrow, a bow, a sword, a lotus, a rosary, a bell, a kamandala (sacred vessel) in the other, and he left his tenth hand to bless his devotees. With a pure heart he closed his eyes and prayed to Lord Shiva, requesting him to change his appearance to a more presentable groom and bring a respectable procession. Lord Shiva heard his prayer, and he immediately transformed into his charming avatar. His procession was also reformed and included gods and goddesses, other celestial beings. They married with great pomp and grandeur. Since then, devotees celebrate the third day of Navratri by worshiping Goddess Chandraganta, the third incarnation of Goddess Durga.

Chandraghanta Puja is performed on Tritiya Tithi on Navratri Tritiya Tithi. The worship area is cleaned and purified with Ganges water or Gomutra (cow urine). Then a coconut is placed on a pot (kalash) filled with water made of silver, copper or earth to establish the Kalash. The worshiper then takes a resolution for the puja and performs the Shodopchar puja for Goddess Chandraganta. Then, for each deity, relevant puja material is offered. Finally, an aarti is performed and then Prasad is distributed among the devotees. To please the goddess, milk and milk products are offered to her. By worshiping, Goddess Chandraghanta is pleased, and she removes all obstacles.

Below is a puja method to perform Chandraghanta Puja.

By performing Chandraghanta Puja, devotees witness the spiritual grace of Goddess Chandraghanta. They can smell heavenly scents and mystical sounds. It is believed that the goddess always protects her devotees from harm and brings happiness in their lives. It is said that worshiping Goddess Chandraganta with a pure heart removes all the negativity from our life. All our sins, unexplained sufferings, negativity, distress, mental worries, tribulations and troubles are eradicated by the grace of the Goddess. When she rides a lion, she exudes positivity, fierceness and motherly aura towards her devotees.