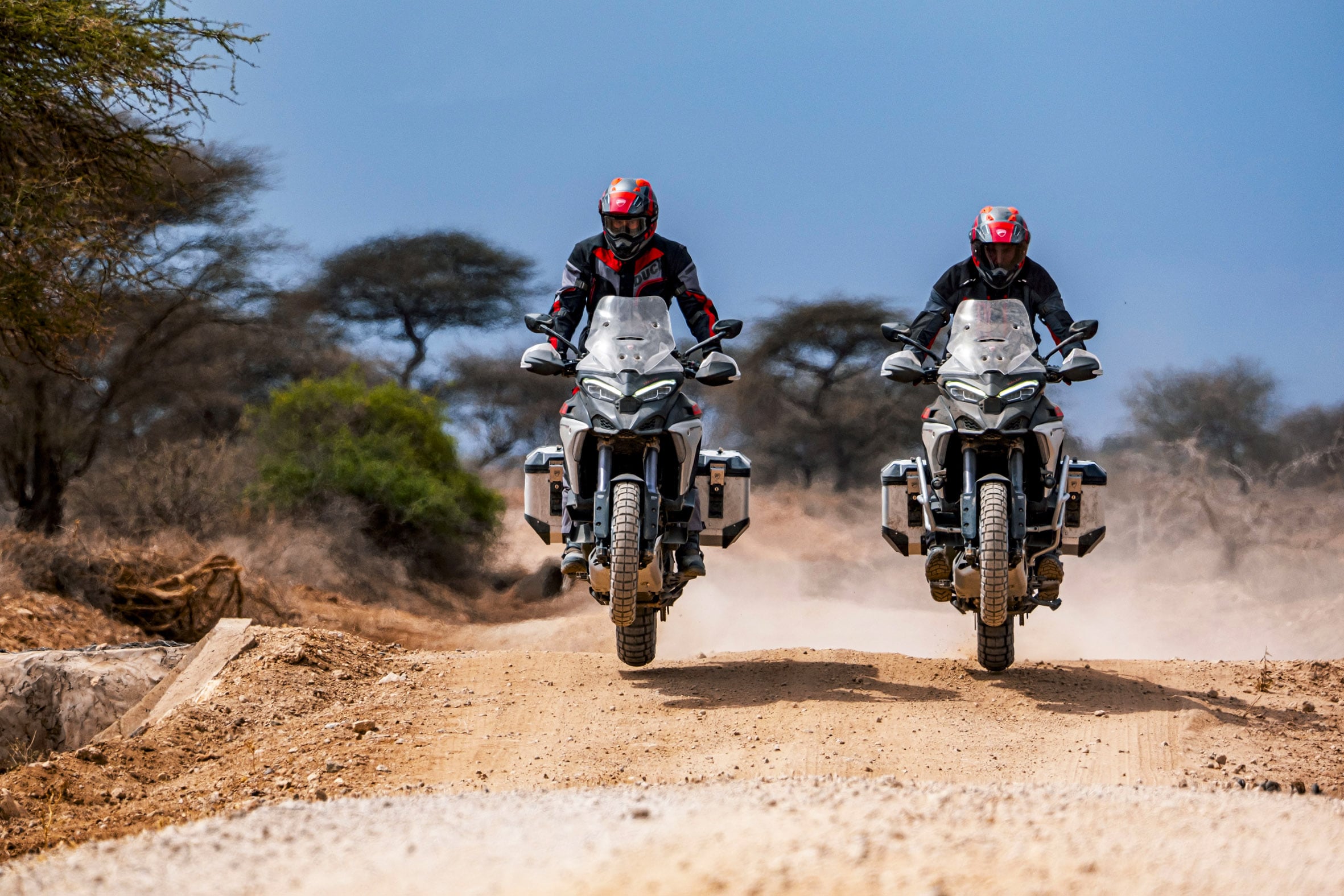 ADVENTURE motorcycle fans take note, there is a new king of the jungle as the Ducati Multistrada V4 Rally is announced for 2023.

Like the Explorer models the new Triumph Tiger 1200, the Multistrada V4 Rally takes the already eminently capable stock bike, adding more range, better off-road handling and control, and improved comfort. As the name suggests though, this bike is born for the dirt and features some elements that might hamper everyday on-road use.

Like the stock Multistrada V4, it features top-spec semi-active Skyhook suspension from Showa, although the bike now towers with 200mm of travel, an increase of 30mm. Added to the revised hardware is a new self-levelling ability, keeping the bike on the level even when the going gets bumpy. The new Ducati Multistrada V4 Rally also has a new power mode specifically for extreme off-road riding (not that the V4 S is particularly bad on that front) although peak power and torque in the road riding modes remain the same – 170 hp and 89lb -ft. Selecting the newly updated Enduro Riding Mode activates a dedicated power mode, reducing power to 114 hp and providing you with a direct throttle map. The traction control switches to a lower intervention level and the wheelie control are deactivated. The ABS on the rear wheel is also deactivated detection and cornering functionality and rear lift are suppressed to adapt to off-road use. The bike also comes as standard with lightweight spoked wheels, a feature that is an option on the V4 S.

To increase the range of the bike, Ducati has also graced the new Rally edition with cavernous 30 liter fuel tank, increasing range of bike around 60-miles thanks to the extra eight litres. In my experience, from riding the Multistrada V4 S last year, that should but the absolute maximum range of the bike somewhere between 230 and 250 miles.

The rear cylinder deactivation of the Granturismo engine has also been adjusted, with the rear bank of cylinders now deactivating while the bikes in motion. Previous it would only do this at a standstill, when you were waiting at traffic lights it was noticeable, but now the system deactivates the rear bank while riding gently to aid fuel economy.

A neat feature of the new Rally edition is the inclusion of the kind of system we first saw on the Harley-Davidson Pan America. The suspension can lower the bike when the ignition turns on, making the bike easier to get onto and lift off the stand. It’s the kind of system made possible with electronic suspension, and is the only thing that allows short riding (like myself) to be able to get on with these towering machines! We would not be surprised if this opened the floodgates for manufacturers, many of whom will likely follow suit and include this clever feature on their flagship machines.

Pricing for the Ducati Multistrada V4 Rally is to be confirmed, we’ll update this article when they land.

More information on the Ducati Multistrada V4 Rally can be found here,