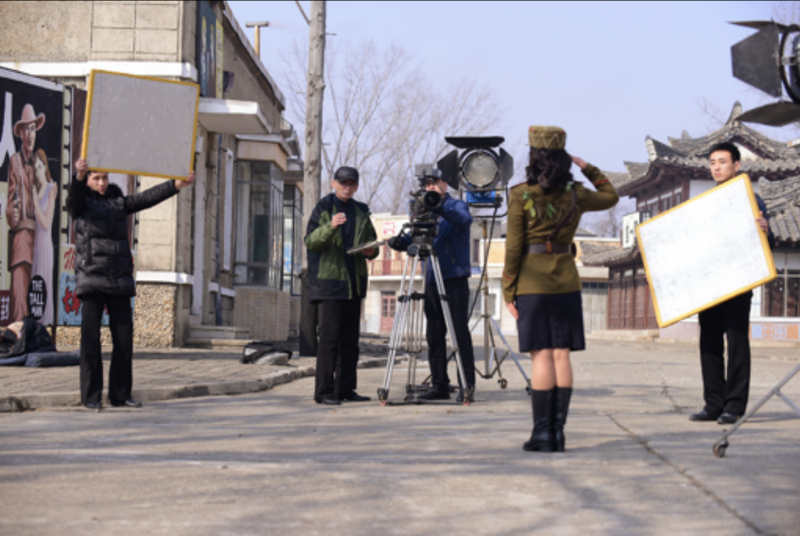 As a whole 2021 and 2022, North Korea’s most famous actors headed out to the Korean film studio for a photographic shoot of the films they had starred in.

Unpaid and in their own time they were doing it to support Koryo Tours & Studio, a western company that has worked with them for decades.

The results of photographer Kim Gwang Hun’s most amazing shoot are below, available in limited edition.

Despite the DPRK being tightly closed for the last two+ years we have maintained our contacts there, and some of the country’s best-known film and TV stars have been mobilized to send us some remarkable art photographs of them recreating some of their iconic roles.

This is something never-before-seen and available nowhere else.

You could have some of these hanging on your wall soon – check out this special offer!

Never seen any North Korean movies? Didn’t even know North Korea makes its own movies? This is your chance to find out more and get lost in the interesting rabbit hole that is North Korean film.

Although the budget may be a bit lower than films produced in Hollywood nowadays, North Korea has its own ‘Chollywood’. The Film Studios in Pyongyang are where all the action happens. This massive movie set has been home to many of the movies produced in North Korea. Here, you can walk down streets lined with Ramen shops and Izakaya’s in Japan or find yourself in a lovely countryside area with European style houses; all within a couple of minutes. It is also where the country’s most famous actor and photographers headed back to so that they could re-create scenes from the movies and capture these images for you.

It’s not just the homegrown film North Korea is interested in. The Pyongyang International Film Festival (PIFF) is currently closed due to the pandemic but from 2023 is likely to be an annual event showing films from around the world, and set to become more and more popular every year. Russian and Indian films are usually a big hit, with Bollywood films definitely taking center stage in 2019.

Want to get started on North Korean film?

The most famous production is probably The Flower Girl, This not only was a hit in North Korea but also abroad, especially in China. Originally one of the five ‘Revolutionary Operas’ written by Kim Il Sung, it tells the tale of a Korean family reduced to absolute poverty during the Japanese occupation and one of the girls has to resort to selling flowers to support her sick Mother, but after the blinding of her sister it just gets even worse…

Hong Yong Hui now age 66 is the country’s most famous actress- she is the Judi Dench of North Korean cinema, loved by all. At the age of 16, Hong played the lead role of Ggot Bun in the film. She was awarded the highly prestigious title of ‘People’s Artist’.

Hong remained as an actor at the Korean Feature Film Studio. We have met her on several occasions and she is an incredible woman, still acting but also teaching young actors. A Diploma of Graduation

Next up is Pak Su Hyang (34) who hit international fame (ok well North Korean fame!) in A Diploma of Graduation in 2016.

She studied at the Pyongyang University of Dramatic where she auditioned for the part of a military officer and so wowed the director with her talent that he increased the number of lines she would have.

We know he used to be a bit of a heartthrob but at 43 there will be another actor coming in to take his crown. When we were writing the script for our feature film ‘Comrade Kim Goes Flying’ we were asked by the waitresses at the hotel to make sure we put in some young good looking actors as they were bored of the old stereotyped ones!

These are not photos from the original film shoots – they are reproduced specifically for this project.

Directors, crew, makeup artists, and the actors themselves all getting together voluntarily to reproduce both moments from their films, and the preparation leading up to them.

Some are from films decades old, some from recent productions, all are only available through this special offer.

A Personal Touch from North Korea’s Finest Filmmakers and Actors

You may not have seen any of the films or series being recreated in these photos, but still, the quality of the work, the filmmakers’ craft, and the actors’ skills shine through in their evocative poses and expressions.

Each paired set and individual portrait contains a story and we provide the name of the films as well as quotes from the actors and directors involved in this series.

This gives a more personal element to those featured and involved in putting this exciting and unprecedented photographic art project together.

With North Korea closed to tourists since January 2020 all trips plus our engagement projects (including artistic efforts and humanitarian projects) have been put on hold – With devastating effects on our company.

This project came about simply through an effort by people we have worked with in the film-making field to help us out by creating this commissioned project and providing high resolution and high quality photographs exclusively to their friends at Koryo Tours & Studio.

If you would like to both own a limited edition fine art print of one or more photos, and help out Koryo at a very hard time then we are incredibly grateful for any consideration.

In these sets, one photograph is of the crew setting up the shot (posed setting it up of course), and then a second one recreating scenes from an iconic North Korean film.

These work best paired to show the process and the result.

Featuring some of the most famous local DPRK movies and movie stars in their biggest roles, recreated exclusively for these photos graphs and available nowhere else.

Explanations of what film is being recreated, as well as some comments from featured actors and directors, can be found with each photo on our website.

Powerful single-shots of some of the most famous stars and character actors in North Korean cinema recreating their favorite roles – just for this project and in photos available nowhere else.

From movies with social, romantic, and military themes, all made for a local audience and instantly recognizable to any North Korean cinéaste.

These actors are some of the biggest stars of film and TV drama in the DPRK.

Explanations of what film is being recreated, as well as some comments from featured actors and directors can be found with each photo on our website 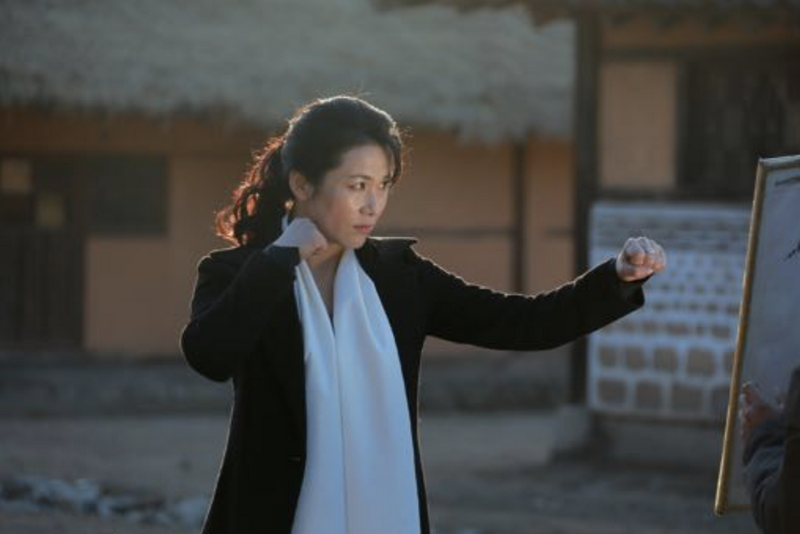 Each print has a 2cm white margin embossed with the Koryo Studio seal. 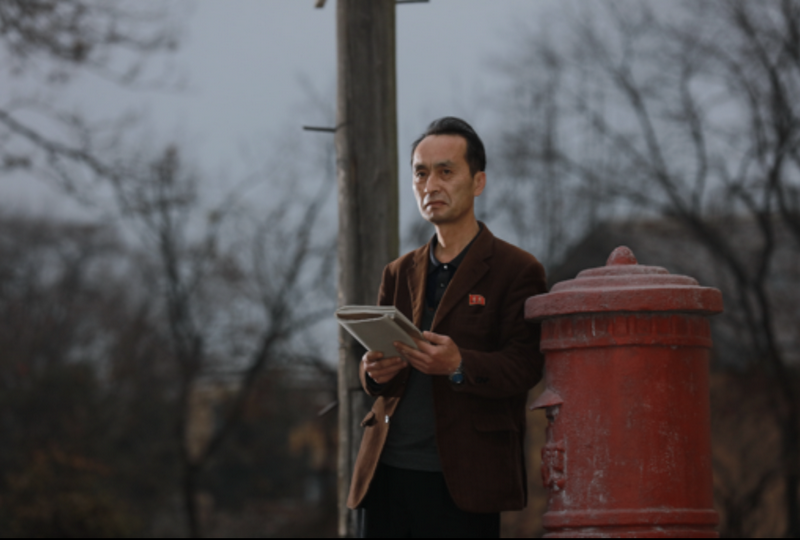 During 2021 the featured performers were taken to the film studio and reunited with cinematographers and directors who had worked on some of their most famous and well-regarded films.

The Korean Art Film Studio is the home of the North Korean film industry and is located in a northern suburb of Pyongyang and was founded in 1947, with over 750,00 square meters of space designated for film making.

As well as functioning as a film studio to produce multiple Korean movies, it is also open as an attraction for local and international tourists.

There are indoor studios and sound stages, but the most interesting are the exterior permanent film consisting of lots of a traditional Korean village, historic Korean buildings, a 1930’s Chinese ‘Manchuria’ street, a Japanese street, a Korean street from the period before liberation, a South Korean street (complete with advertising for morally dubious products and services), and also a European village.

There is also a railway station and various sets in wooded areas to represent the anti-Japanese struggle that took place in the north of the country.

Scenes from the 18-part film series which featured several US military defectors Nameless Heroes (1978-81), were shot at the studio, as were North Korean classics such as Hong Kil Dong (1986) and North Korea’s very first film My Native Home (1949). 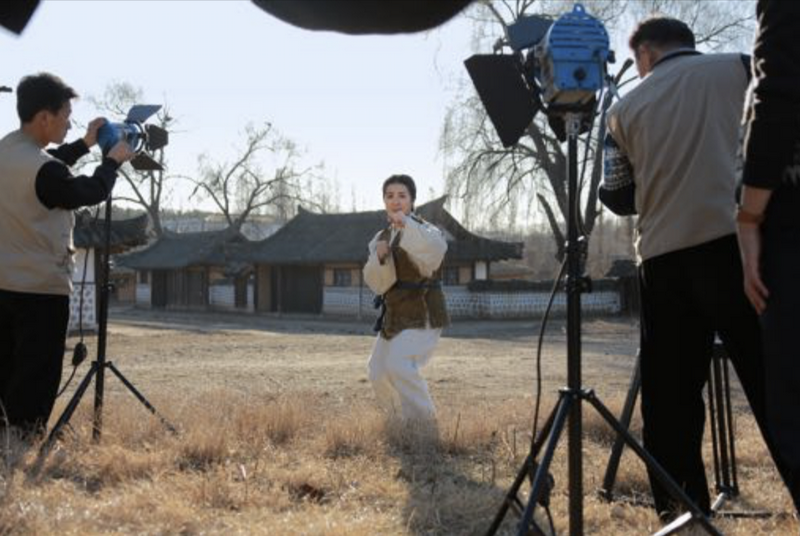 In Spring 2021, I received a phone call from our Korean producer who I have worked with on all of our films since 2001.

She knew our company was in difficulty with the virus stopping all tourism which is how we raise funds for our various cultural exchange projects. She said she had “received permission to mobilize the actors for your photo project and we will send you the photographs digitally.

The actors were volunteering to be a part of the project but because of covid restrictions, the shoot would take place throughout 2021 and spring of 2022.

The files arrived and included three of the most famous actors in the country: Hong Yong Hi (A Flower Girl), Kim Sun (Kite in the Sky), and Kim Ryon Hwa (We Live Here) as well as other performers and director from different studios.

It was remarkable for our partners to receive permission to send photographs out of the country, and even more so to be given these images for our own use. A gesture of friendship and trust between filmmakers from very different backgrounds and cultures.

Thanks so much for considering purchasing some of these unique and limited edition prints – by doing so you will be obtaining an amazing and special piece of North Korean cinematic and cultural history with a fascinating backstory, as well as supporting our company in all its engagement works with North Korea during a difficult period when tours cannot run – we are very grateful for any consideration

Buy yourself a limited edition print of this remarkable project and support the ongoing work of Koryo Tours here,