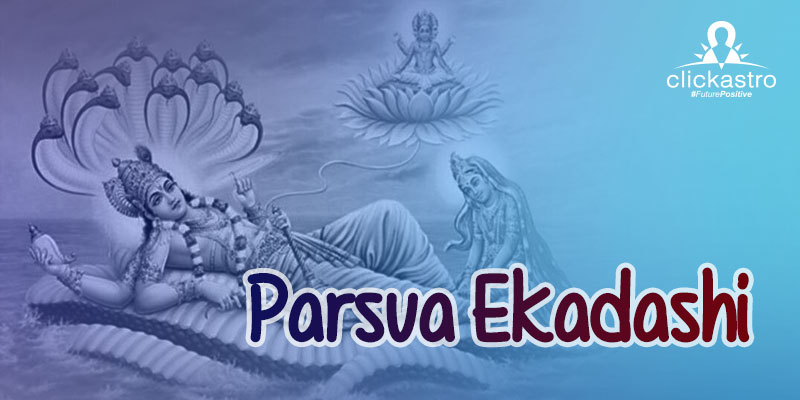 The eleventh lunar phase is known as Ekadashi. The followers of Vedic culture consider the day of Ekadashi to be auspicious. Each of the 24 Ekadashis of the year are named and celebrated differently. There are two Ekadashis in every month, one during Shukla Paksha (bright fortnight/waxing phase) and the other during Krishna Paksha (dark fortnight/decreasing phase). Parshva Ekadashi is the Ekadashi celebrated during the Shukla Paksha of Bhadrapada month.

In the traditional Vedic lunar calendar, Parshva Ekadashi is the Ekadashi tithi (11th lunar phase) in the Shukla Paksha or bright fortnight of the month of Bhadrapada. It falls in August or September according to the Gregorian calendar. Parshva Ekadashi is a holy day for the devotees of Vedic culture. Like every Ekadashi, this day is also dedicated to Lord Vishnu. During the festival, devotees observe vrat (fasting), puja and other auspicious works.

When is Parshwa Ekadashi 2022

According to Vedic astrology, Parshva Ekadashi is the time when Lord Vishnu, who is resting on Sheshnag, shifts his position from left to right. This is the reason why this festival is known as Parshva Ekadashi or Parvartini Ekadashi (also known as Parshva Parivartini Ekadashi). ‘Parva’ means ‘side’ and ‘Parvartini’ means ‘change’. Parsva Parivartini Ekadashi occurs during Dakshinayana Punyakalam (south movement of the Sun). It is considered to be the most sacred of the Ekadashis that occur during the Chaturmas period which ranges from Ekadashi of Shukla Paksha in the month of Ashadha to Ekadashi of Shukla Paksha in the month of Kartik. Devotees celebrate Parshva Ekadashi with great devotion. Lord Vamana (incarnation of Lord Vishnu) is worshiped on this day, and hence this day is also known as Vamana Ekadashi in some regions. Other names for the occasion include Jayanti Ekadashi and Jaljhilini Ekadashi.

What is the significance of Parshva Ekadashi?

The religious and astrological significance of Parshva Ekadashi is innumerable. Its importance is explained in detail in the Brahma Vaivarta Purana in the form of a conversation between Lord Krishna and King Yudhishthira. Parshva Ekadashi falls on Dakshinayana Punyakalam, which occurs when the sun rises in the southeast. The beginning of Dakshinayana, or the 6-month southward movement of the Sun while rising in the east, is marked by Karaka Sankranti or Karkata Sankranti (the Sun’s transit into the Karka Rasi or Cancer). In Deva Loka, it is considered to be night time (the realm of the gods). It is also considered as the night of the gods. Since it falls during Chaturmas period, Parshva Ekadashi is considered extremely auspicious. The Chaturmas period lasts for four lunar months, starting with Shayani Ekadashi (Shukla Paksha Ekadashi of the month of Ashadh) and ending with Prabodhini Ekadashi (Shukla Paksha Ekadashi of Kartik month). Shravan, Bhadra and Ashwin are the months between these two events. This period corresponds to the rainy season in India, and the deities are said to rest during this time. The most sacred of Chaturmas Ekadashi is Parshva Ekadashi, which is the Ekadashi of Shukla Paksha of Bhadra month. The virtues obtained by fasting on this occasion are considered to have high spiritual value. According to legend, Lord Vishnu sleeps for four months, starting from Devshayani or Shayani Ekadashi and ending on Devottana or Prabodhini Ekadashi. Parshva Ekadashi, which falls between these dates, is the time when the resting Lord shifts his position from left to right. Parshva Ekadashi has been celebrated since ancient times. The various rituals performed on this occasion are said to confer great virtue. Holy Parshva Ekadashi Vrat/Vrat is the most celebrated ritual on this day. It is believed that those who observe this fast will receive the divine blessings of Lord Vishnu, the preserver of the universe. By this the devotee gets happiness, prosperity and good health. According to the widespread belief, by observing Parshva Ekadashi fast, the devotee will be atone for all his past sins and he will attain Moksha, or liberation from the cycle of birth and death.

What are the rituals of Parshva Ekadashi?

Fasting, worship, prayer and chanting of holy scriptures are all part of Parshva Ekadashi rituals. The most important of these fasts is the fast. Parshva Ekadashi Vrat is observed from Ekadashi sunrise to Dwadashi tithi. Because a complete fast is advised, a devotee can start the fast at sunset of the previous day (Dashami day) to ensure that no undigested food remains in the stomach. On the day of Ekadashi, devotees should wake up before sunrise and take a holy bath. They should either go to Vishnu temple or worship the Lord at home with flowers, sandalwood paste and incense sticks after taking bath. Those who are unable to fast completely can observe a partial fast by consuming fruits, nuts and water. Cereals, rice and beans are prohibited on Parshva Ekadashi. Those who are not fasting should also avoid eating and cooking pulses, cereals and non-vegetarian food. Fruits, vegetables, nuts and dairy products are all allowed. An important Ekadashi ritual is the worship of Lord Vishnu. If possible, the devotees observing the fast should visit the temples of Lord Vishnu. During the fast, it is considered very auspicious to chant divine mantras and recite holy texts such as Bhagavad Gita, Satyanarayan Katha, and Vishnu Sahasranama (1000 names of Vishnu).

According to the ancient legends, those who observe Parshv Ekadashi Vrat with devotion are blessed by Lord Vishnu. They will be granted happiness, prosperity and good health as well as forgiveness for their past sins. It is also believed that they will also be freed from the cycle of death and rebirth. Observance of Parshva Ekadashi fast is much more than just fasting or abstaining from food. The supervisor should avoid negative thoughts and actions. One should think and do only positive things which bring them closer to God. This is the reason why it is recommended for fasting people to read and assimilate the holy scriptures.

The methods of Parsva Ekadashi fasting include the following:

Parana or fasting is to be concluded on the next day (Dwadashi) after sunrise. The observer should ensure to do the Parana during Dwadashi Tithi unless the Dwadashi Tithi is over before sunrise. One must ensure that Parana is not performed during the Hari Vasara period, which is the first quarter of the Dwadashi tithi. To break the Parshva Ekadashi fast, one must wait until the period of Hari Vasara is over. The most popular time to break the fast is early morning. Devotees should avoid breaking the fast during the midday period. If the devotee is unable to break the fast in the morning due to any reason, then he should observe the fast after midday.

The story of Parshva Ekadashi is associated with King Mahabali and Lord Vamana. Mahabali, the demon king, was a powerful ruler who ruled the earth, heaven and the Netherlands. Despite being an Asura, he was a devotee of Lord Vishnu and was famous for his love and benevolence towards his people. On the other hand, the gods were angry with him because he had defeated them, and also because of his growing power and popularity. As a result, the gods sought Lord Vishnu’s help in bringing out Mahabali. God took the form of a dwarf. The Brahmin (Vaman) went to King Mahabali and asked for three steps of land. When the king granted her wish, Vamana grew enormous and covered the heaven and the earth with his first two feet, leaving no room for the third. Knowing the true identity of Vamana, King Bali bowed his head for the third step. Lord Vamana then buried her in the Hades (Netherworld) and granted her salvation. It is tempting to note that the Onam festival (the state festival of Kerala) follows the same legend and takes place at the same time of the year.