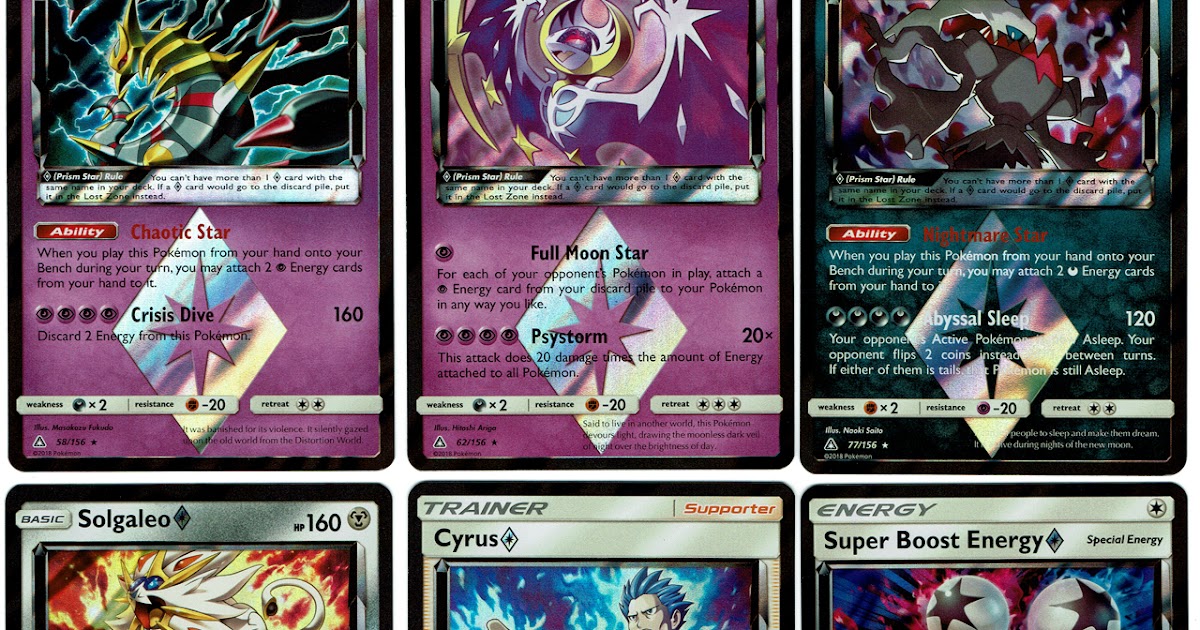 The newest set in the Pokemon TCG, Ultra Prism, was highly anticipated by competitive players of the TCG, Prism Star cards were one of those reasons. Prism Star cards are more powerful Pokemon, Trainers, and Special Energy cards. When deck building, you can’t use more than 1 copy of a Prism Star card with the same name, and when a Prism Star card is normally discarded, it goes to the Lost Zone instead. There are a total of 6 Prism Star cards in the Ultra Prism set. These cards come in the reverse holo slot of the pack and on average, are 2 to 3 per booster box, it is possible to get both a Star Prism card and an ultra rare or secret rare in the same pack. For being more powerful, value wise, these cards aren’t worth much, at least not yet, you’re looking at $6 or less per card. I would assume Prism Star cards will be in the next several Sun and Moon series sets, similar to how BREAK cards were in the final XY series of sets.

Taking a look at the 6 different Prism Star cards, and I have obtained all 6 from my openings already, there are two that I really like, Solgaleo, and Cyrus, and both can be used in the same Metal type deck. Solgaleo is my favorite Prism Star cards for a couple of reasons, first, it does have a very high HP, which could be 200, with a Fighting Fury Belt attached to it, making it a tank of a card to take down and only get 1 prize card. Second, if you’re facing something like Glaceon GX, and your EX and GX Pokemon’s Abilities are disabled, you can still use this card’s Radiant Star move to quickly attach Energy, probably to Dusk Mane Necrozma GX from this set. Plus, you can do 160+ damage with this card, you just need four Energy cards on it first. With the popularity of Zoroark GX, and its need to have a full Bench to do 120 damage with Riotous Beating, this can greatly increase the number of Energy cards you’re able to attach with Solgaleo. So again, Solgaleo Prism Star is my favorite Prism Star in the set, I like its high HP, and both of its moves, especially if Glaceon GX becomes popular, this card doesn’t rely on an Ability and it isn’t a GX or EX card, so it works perfectly to accelerate Metal type Energy into play. Plus, Metal type Pokemon have a huge advantage over Fairy type decks, Sylveon GX and Gardevoir GX in particular.

My second favorite Prism Star in this set would be Cyrus. It is important to note that the Cyrus pictured above and all of the Cyrus Prism Star cards printed so far have an error in the description of what the card does. Currently, the card says “You can’t play this card if you don’t have any Water or Metal Pokemon in play”, the correct version should say something like “You can’t play this card if you don’t have a Water or Metal Pokemon in your Active Pokemon spot”. Regardless, if you’re building a Water or Metal type deck, this card is beyond useful, quickly removing up to 4 of your opponent’s Pokemon in play. This card can remove Pokemon that have Abilities that are used on the Bench, or, if your opponent already has a lot of Energy on their Benched Pokemon, it can ruin their strategy of getting lots of Energy into play quickly. The two Prism Star cards from this set I like most can certainly be used together in a deck, just make sure to use Solgaleo first, then Cyrus, otherwise, Solgaleo won’t be able to add many Energy to your Pokemon if your opponent doesn’t ‘t have many Pokemon in play. You could also use Cyrus with Glaceon GX, although it may backfire. More than likely if your opponent has played a couple of Tapu Lele GX, they will decide to remove them from play when you lay down Cyrus, but, if you have Glaceon GX in the Active Pokemon spot, when they get Tapu Lele GX back into their hand, they won’t be able to utilize its Ability, Wonder Tag and grab a supporter when putting it on their Bench. This Cyrus card also weakens Zoroark GX, as it reduces the number of Benched Pokemon in play, having its attack go from 120 to only 40.

As far as the other Prism Star cards go, I was really excited about Super Boost Energy when it was first released in Japan, but the more I look at it, the more I think it won’t be used. Sure, providing 4 Energy at once is very helpful, but I can’t think of many decks that I’ve built where I have three Stage 2 Pokemon set up at the same time, and if I do, I probably have plenty of Energy in play already. Plus, Stage 2 Pokemon that are useful, like Vikavolt, Metagross GX, Gardevoir GX, and Decidueye GX, all either accelerate Energy attachment, or, they are only used from the Bench, so having 4 Energy cards at once isn’t that important . The only deck I could see getting lucky with Super Boost Energy would be Gardevoir, since you may have two Gardevoir GX set up at once plus a Gallade, by laying down a Super Boost Energy, it would do 120 more damage when attacking with Gardevoir GX . And if you do have three Stage 2 Pokemon in play, and let’s say they are close to being knocked out, you can slap a Super Boost Energy on Tapu Lele and do at least 80 damage, 110 damage with a Choice Band, in one quick move.

Lunala Prism Star is very similar to Solgaleo Prism Star, having an identical first move, in this case allowing you to attach up to 6 Psychic Energy cards from your discard pile to your Pokemon in one turn. The second move on this card, has lots of potential, since it can do 20 damage times the number of all Energy in play, so if you are facing a Gardevoir GX deck, it can do major damage. I would still prefer building a Metal type deck, using Solgaleo Prism Star and Dusk Mane Necrozma GX, just because Dusk Mane Necrozma is guaranteed to do 220 damage per turn, and Gardevoir GX is weak to Metal type Pokemon, but if you have any high attack cost Psychic Pokemon, Lunala Prism Star is a must!

Darkrai Prism Star and Giratina Prism Star are easily the poorest cards of the 6, both Pokemon are similar, with their Ability allowing you to move two Darkness or Psychic Energy from your hand to that specific Pokemon when it is put onto the Bench. So unlike the first move on Lunala and Solgaleo, the Abilities on these two cards only apply to Darkrai and Giratina. Both Darkrai and Giratina can do major damage when attacking, 120 and 160, but for the amount of Energy cards required, and the fact the you need Energy cards in your hand in order to use their Abilities, neither card is worth using when deck building . Between these two cards, Darkrai is the better one.

Personally, I have now opened around 150 booster packs of Ultra Prism and have lots of openings to post to YouTube very soon. I am currently working on reviewing a Zoroark GX and Golisopod GX deck, but hope to get to building a Metal type deck with Solgaleo Prism Star, very soon!