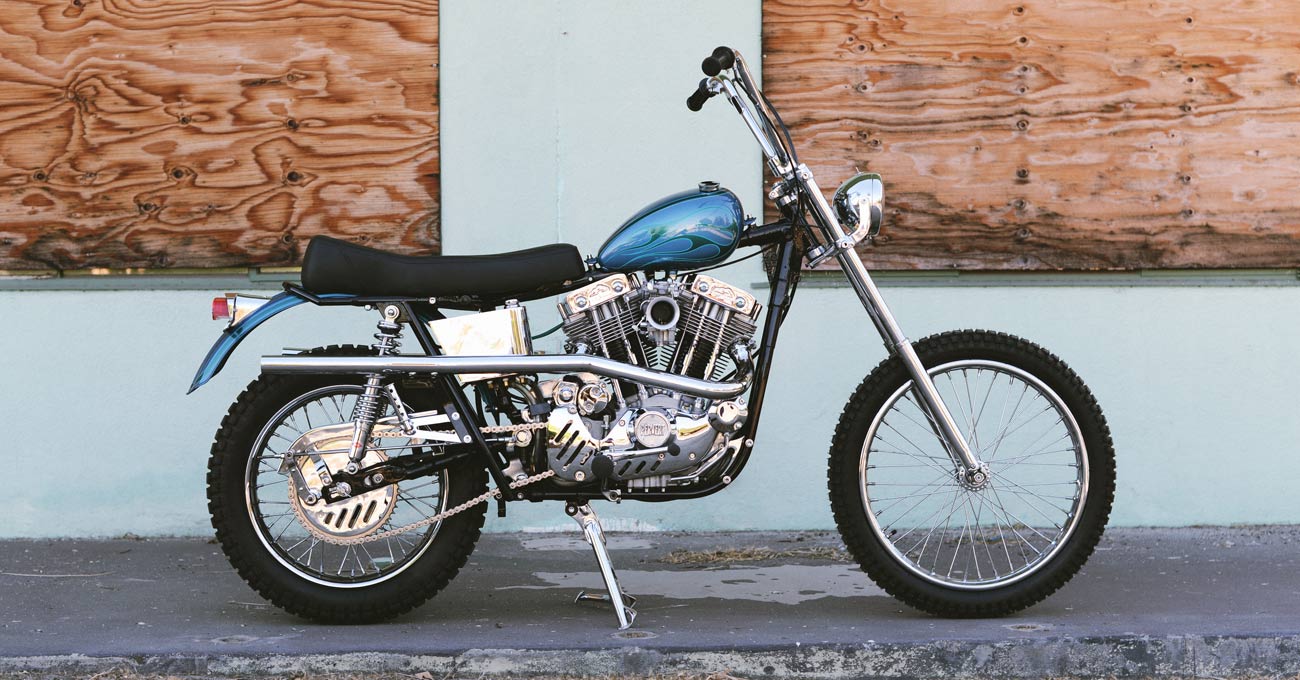 You’ll find no Shortage of custom Harleys on builder Kento Oketani’s home streets of Long Beach. But you won’t find anything quite like his 1970 Harley-Davidson Sportster XLH. You might not know what to make of it at first glance—but once you understand how this desert sled came to be, the pieces start falling into place.

See, Kento took inspiration from an unlikely source: a custom 1956 pre-unit Triumph that his friend imported from the US to Japan, back in the early 2000s. Kento says the bike was a rare find—an authentic custom show build from the early 60s that had survived in incredible condition. 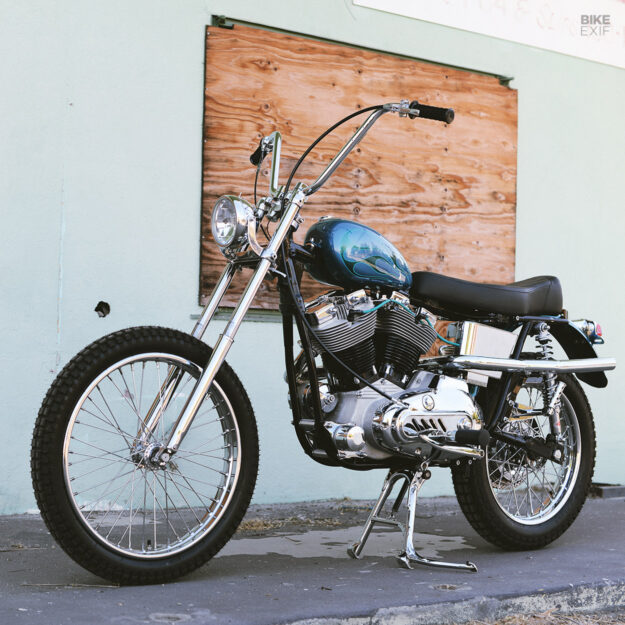 It was the first vintage scrambler he’d ever seen, and it put him on the path to building custom motorcycles himself. A few years after that chance encounter, Kento relocated from his home town of Ishikawa, Japan, to his current place in Long Beach.

It was around that time he started wrenching on bikes—and although vintage Triumphs were a rare sight in Southern California, memories of his friend’s pre-unit were never far from Kento’s mind. 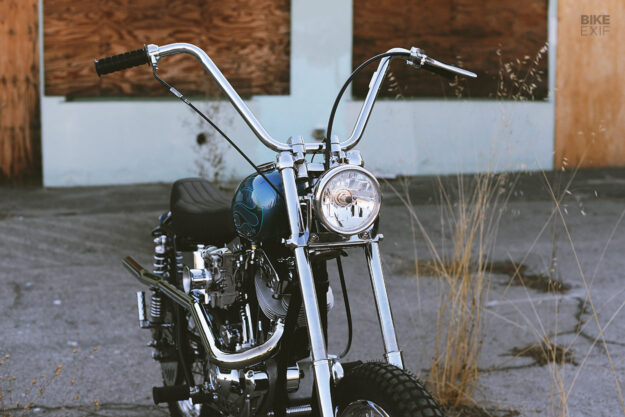 There aren’t many builders who would start a British desert sled project with a 1970 Harley-Davidson, but we’re sure glad someone did. Flipping through pictures of that old Triumph, now yellowed with age, it’s clear that this unlikely mashup of influences shouldn’t work. But there’s no denying that Kento pulled it off with impeccable style.

Up front, the XLH is pure chopper. A set of shaved and chromed 33.4 mm HD forks hold a brakeless 21” front wheel lower down, with a set of apes mounted higher up. The same goes for the headlight—a vintage Bates piece Kento stumbled upon during the build—as well as the 1980s-era OGK NOS grips. 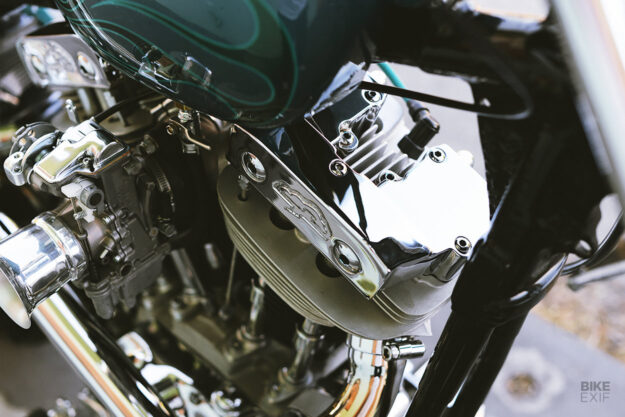 Then of course there’s the engine, a donor from a 1976 XLH that was picked up as a basket case with no cases, broken gears, and a cracked cam cover. Kento says the motor came with a fair amount of usable parts, having been freshly chromed and vapor blasted all over, but it still needed a lot of work.

The engine was treated to new piston rings and an oil pump rebuild, and the internals were long overdue for a refresh. Kento taught himself the inner workings of the ironhead motor as he made his way through it, and added performance upgrades at every opportunity. 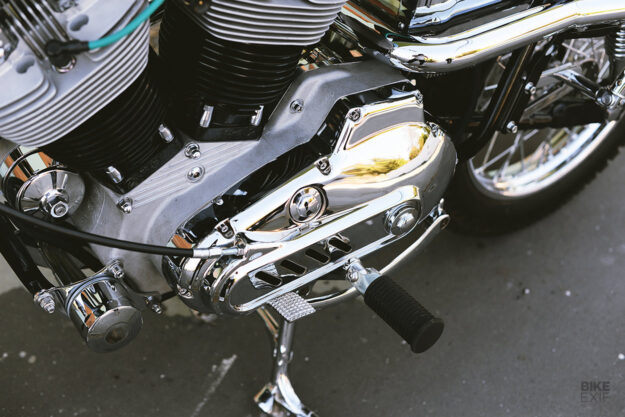 As it sits, the squeaky-clean power plant now sports an S&S Cycle flywheel, carbon fiber push rods, Andrews cams and an Andrews transmission, as well as a Karata belt drive and a Strociek dry clutch setup. Kento finished it off with a fresh Mikuni carburetor, a rare set of Robinson Thunderheads heads, and a pair of matching cam and primary covers that he made from scratch. 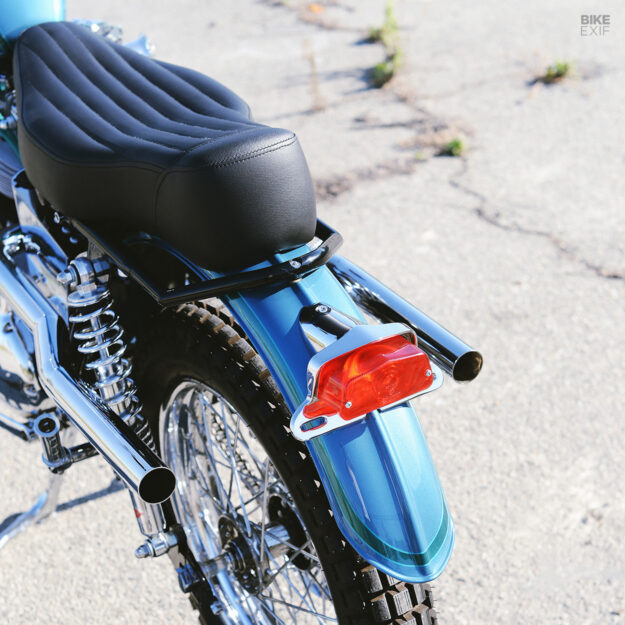 From there, Kento’s bike takes a radical departure from the norm, as the British influence gets more pronounced. The custom-made Saddlemen seat looks like it could have been pulled straight from the bike that inspired it, right down to the ribbed stitching detail. The same goes for the Wassell-style rear fender and Lucas tail light, both of which sit on a custom-made subframe. 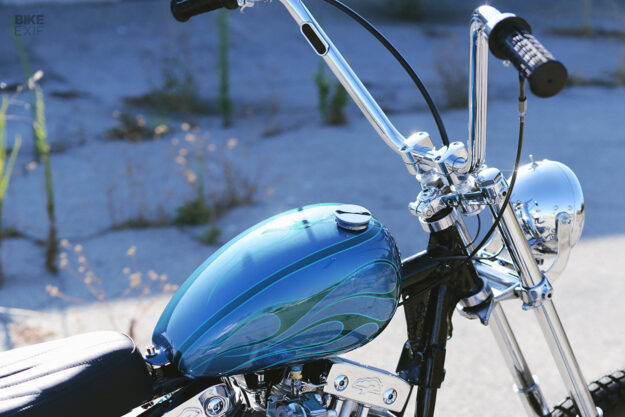 A Wassell-style peanut tank tops off the frame, while upswept scrambler exhaust pipes and a pair of vintage Betor shocks finish out the rear, all of which are clearly more Bud Ekins than they are Willie G. We can’t say we’re disappointed to see something other than a boat tail back here.

The rest of the build is all about the details. The chrome oil tank that Kento fabricated is nothing out of the ordinary at first glance, but on closer inspection, you’ll notice it harbors a slick set of electronics. Kento stashed a Lithium battery up under the seat, allowing him to tuck the rest of the hardware inside the oil tank. 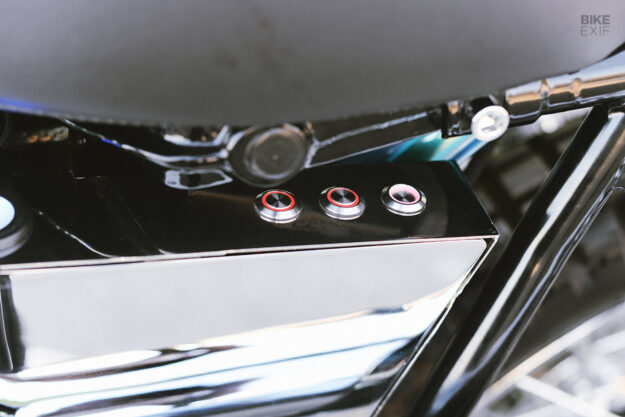 The three red buttons you see up top are actually the killswitch, starter button, and a button to control the sleek Motogadget speedometer. There’s even a USB port, relays, and breakers hidden in there as well.

Kento’s integration of the tiny LED speedo is particularly impressive, with internal routing that slips down inside the handlebars before dropping out and into the frame. 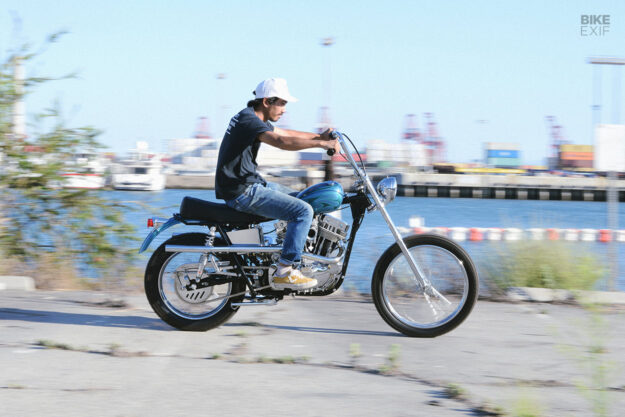 Kento’s bike is a rare bird indeed, and a fitting tribute to the British twin that inspired it. Pre-unit survivors may be a rare sight in the LBC, but there’s nothing quite as eye catching out there as this unique interpretation of the bike that started it all. 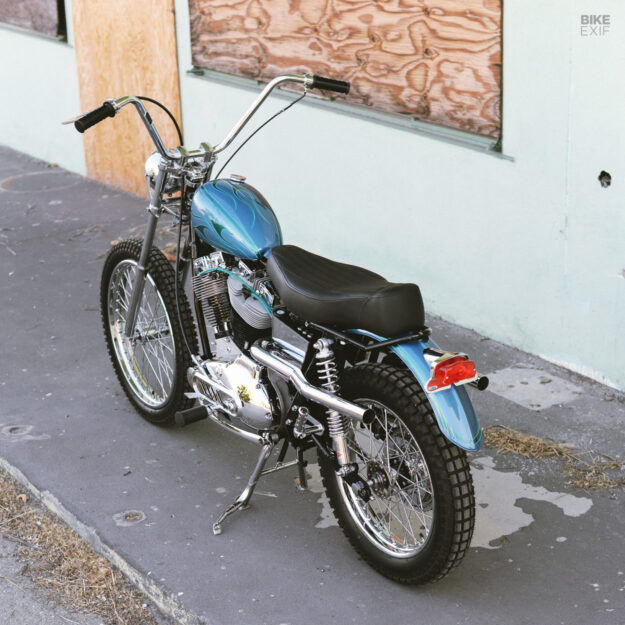