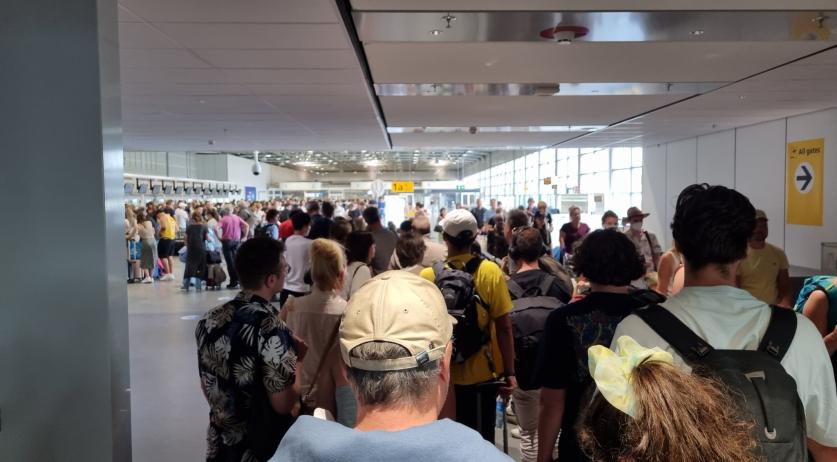 Schiphol Airport plans to make a new proposal to its security guards within two weeks after a recent round of salary negotiations, said the airport’s chief financial officer, Robert Carsouw. It remained unclear to what extent a pay increase might lead to better staffing levels at security. Carsouw said he would not make guesses about the future and any possible improvement to the recent chaotic long lines at the airport. In the meantime, Schiphol will take action to improve the working conditions at the airport to make the security jobs more appealing.

There has been a shortage of staff at Schiphol Airport for months. This creates long queues that sometimes extend beyond the departure halls into the open air. Nevertheless, Carsouw has observed that the number of security officers showing up to work at Schiphol is increasing, although the influx is not as fast as hoped. “The outflow has not accelerated. The inflow has not slowed down after the extra bonus of 5.25 euros per hour was removed. That means that money does not solve everything.”

To find out what is needed to attract more security officers, the airport entered into discussions with the department and security companies. In addition to salary, two other criticisms emerged. Carsouw said security guards were experiencing a high workload due to scheduling, including irregular shifts. Security guards also needed a space to relax during breaks. The airport has already started to work on both issues, the CFO said.

The FNV labor union previously reported that security guards were looking for work elsewhere once the temporary summer bonus disappeared in September. According to FNV’s Schiphol campaign manager, Joost van Doesburg, a high number of security officers were leaving the airport.

To manage the crowds in the departure halls, the airport called on airlines to cancel flights during the spring and summer, and then again last week. After the latest round of cancellations, Schiphol offered the airlines compensation of 350 euros per canceled passenger.

This resulted in a reduction of thousands of passengers per week showing up to depart from the airport, Carsouw said. “Some airlines indicated that they understood the situation. Because it was a last minute request, we thought compensation was appropriate,” explained Carsouw.

But there were also airlines who said the request was not operationally feasible. Carsouw fully understood this, as well. “The capacity had to be relaxed that week. That cost money, but we did well together.”