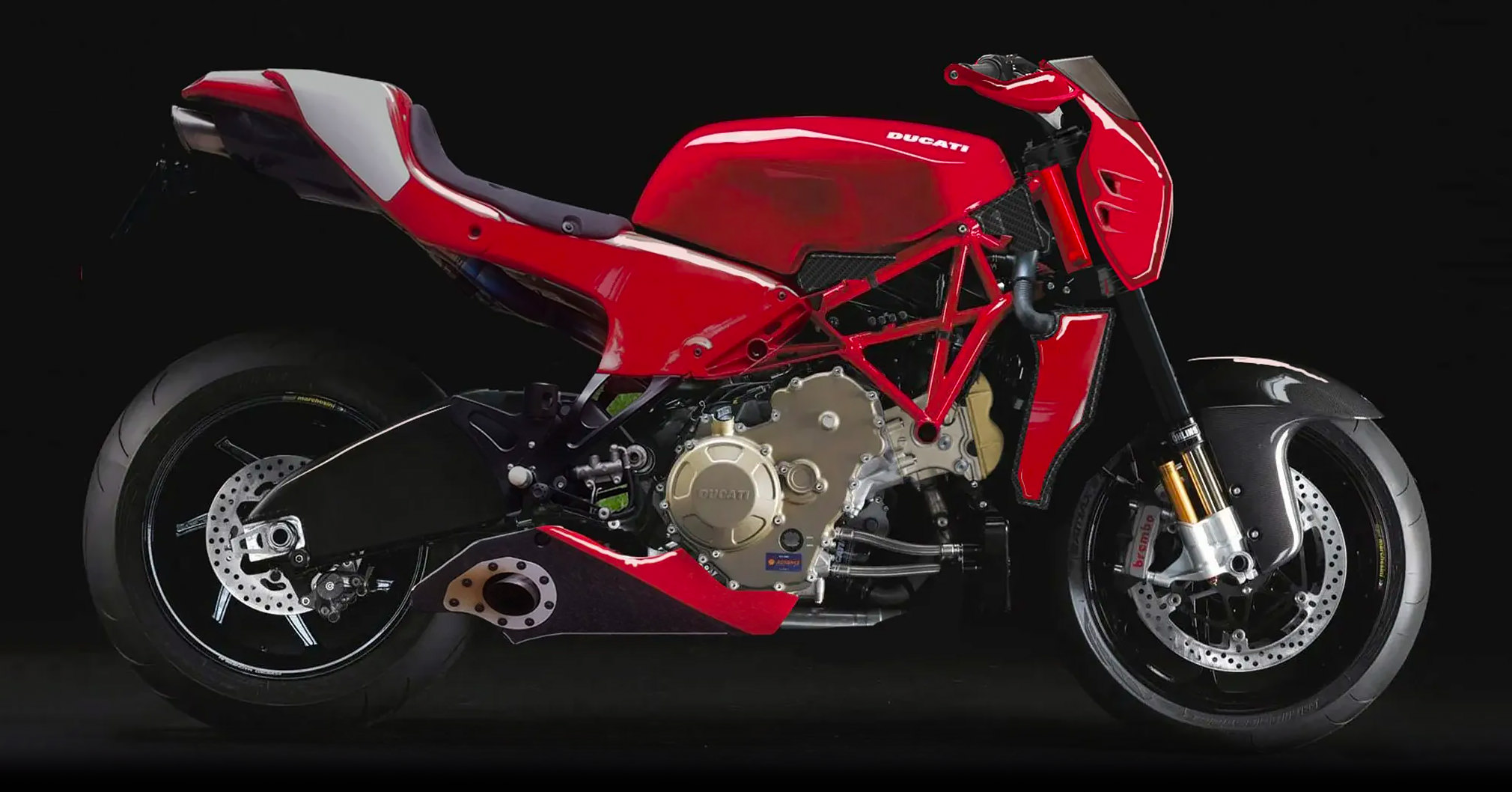 Movie star bikes, limited edition factory specials and fantastic customs—this week’s Speed ​​Read has it all. There’s a Ducati Desmosedici RR from RSD, a Norton Commando, and a chance to own James Bond’s Triumph Scrambler.

But first, we break from our usual programming to show you something we hardly ever feature: a high-spec superbike. 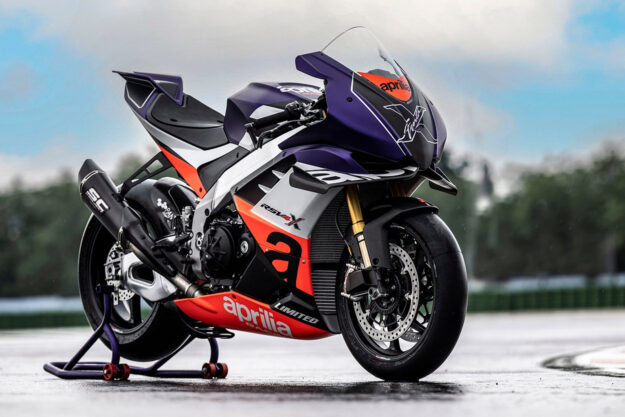 Aprilia RSV4 Xtrenta Aprilia has just pulled the covers off their latest MotoGP-inspired track machine: the RSV4 XTrenta. Built to commemorate the 30th anniversary of Aprilia’s first World Championship title, my first impression of the RSV4 XTrenta was simply a hefty “oof” sound. Even though I just had dinner, all those wings made me hungry. 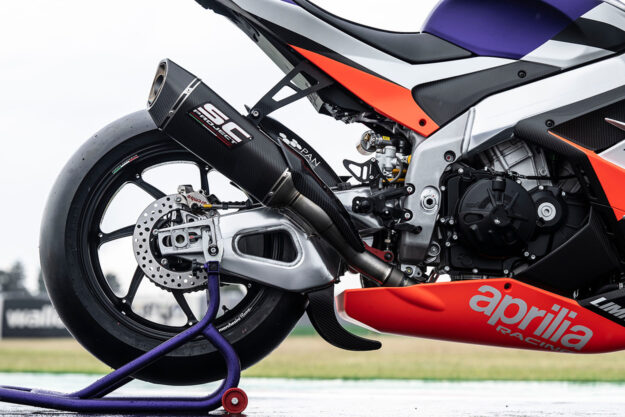 You’re looking at the first bike outside of MotoGP to ever feature not only front wings, but rear and underbody wings too. The “spoon” hanging from the underside of the swingarm may look familiar to fans of the Aprilia RS-GP MotoGP race bike. Developing 25% more downforce and 4% less drag, not only does it boost performance, but it also looks cool as heck.

As with the factory bike, the RSV4 XTrenta is awash with carbon fiber bodywork. It was made especially for Aprilia by PAN Compositi, following the same manufacturing processes used to make the bodywork for the MotoGP bikes. A very strict diet has cut the weight down to just 166 kg [366 lbs], 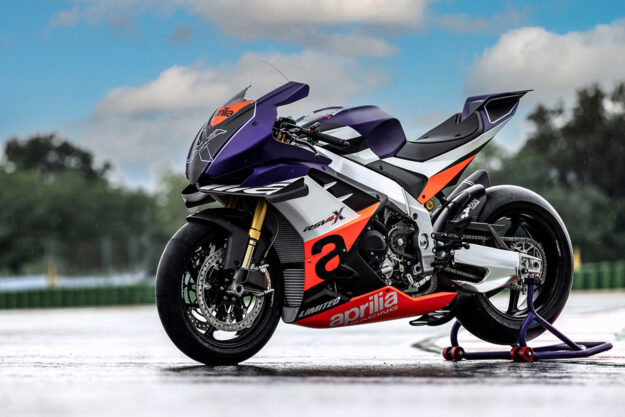 Using the engine from the Aprilia RSV4 Factory as a base, Aprilia upped the compression ratio, and added a full titanium and carbon SC-Project exhaust along with a Sprint Racing air filter. All that has the engine pushing out a whopping 230 hp. Together with the low weight and high downforce, describing this as an absolute track weapon would still be an understatement.

Power and weight figures aside, it also looks the business. The purple against the Day-Glo red and silver just screams style and performance. It looks fast sitting still. 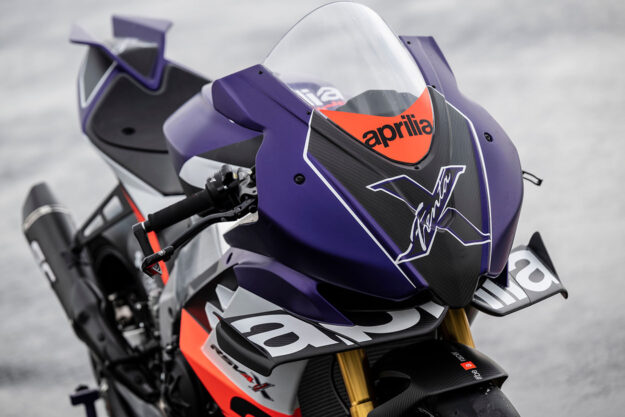 Aprilia are offering just 100 units of the RSV4 XTrenta for sale, so if you’d like one, you’d better get in quick. Sure, the €50,000 price tag is high—but I’ll bet none of your mates have this many wings on their bikes. [More] 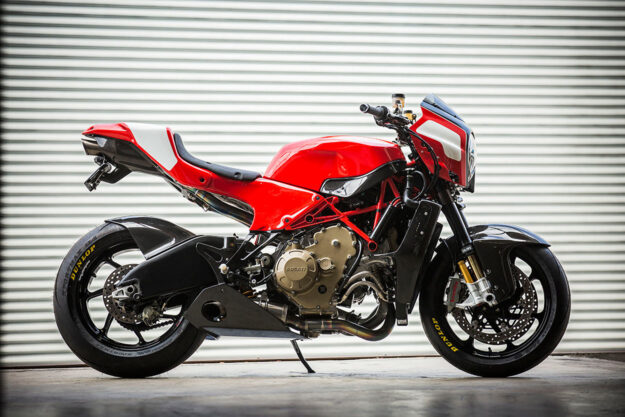 Ducati Desmosedici RR by Roland Sands Design With only 1,500 produced, the Ducati Desmosedici RR is one of the most collectable models the Bologna firm has ever released. Heavily based on their Desmosedici MotoGP bike of the time, the RR (Racing Replica) produces an eye-popping 200 hp at 13,800 rpm, thanks to the 989cc Desmodromic V4.

Ducati added a V4 to its permanent lineup a few years ago—but back in 2008, it was only their MotoGP bike that had more than two cylinders. 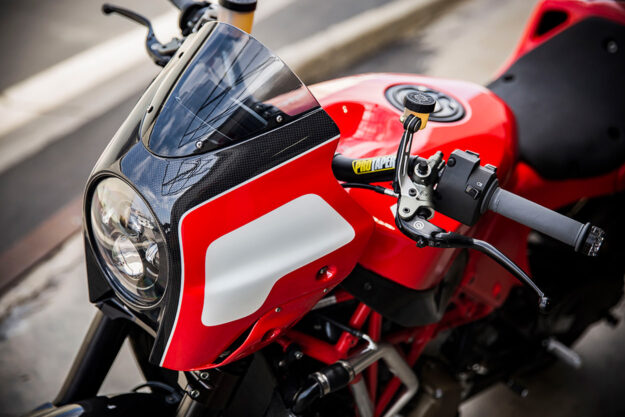 If you were one of the lucky 1500 owners worldwide, paying in excess of $72,000, you’d feel pretty special. It would be a hard thing to give up, especially if you thought you were getting too old to be hooning on a MotoGP bike. And that’s the backstory to what you see here—a 2008 Desmosedici RR, transformed into a striking street bike with an upright riding position for an older gentleman. 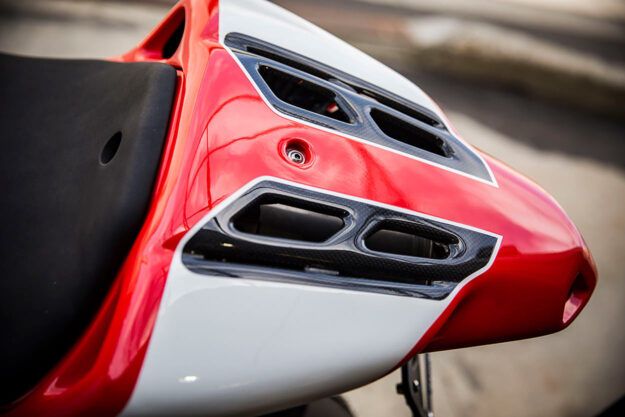 To get here, the Roland Sands Design team tore the bike down and 3D-scanned the fairing-less remains. This allowed them to design the bike in virtual reality—a first for the California workshop. Using the 3D VR approach, they were able to get a perfect fit for the new body parts.

Most interestingly, RSD changed out the rear Marchesini wheel. The factory Desmosedici RR rear wheel is 16.5” in diameter, which must be an enormous pain when you need new tires. Swapping it for a 17” hoop was the obvious choice. 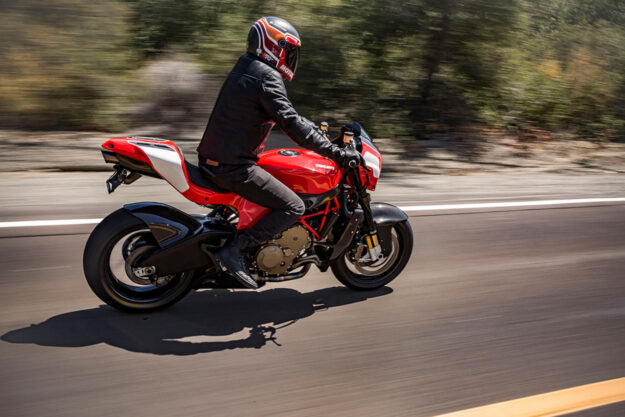 Yes, the owner could have sold his Ducati for a good amount of money, bought a brand new Ducati V4 Streetfighter and be done with it. However, anyone with the inclination and money can do that any day of the week. 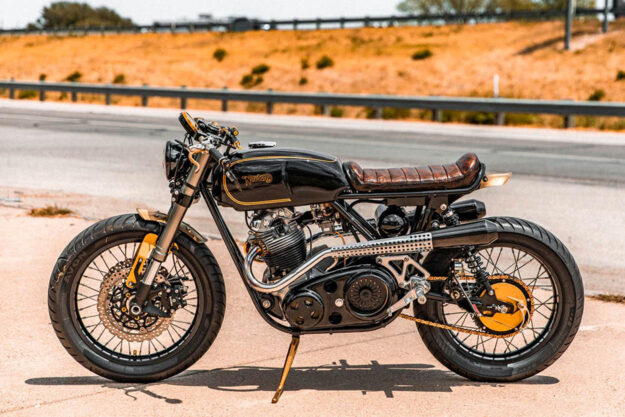 1973 Norton Commando 750 Combat The Norton Commando is one of the world’s most famous English motorcycles. The arrival of the big Japanese inline fours brought on its demise, but it was lauded by owners, journalists and the public alike in its time. It was the first motorcycle I got a ride on as a young kid, so I myself have fond memories of the Commando. 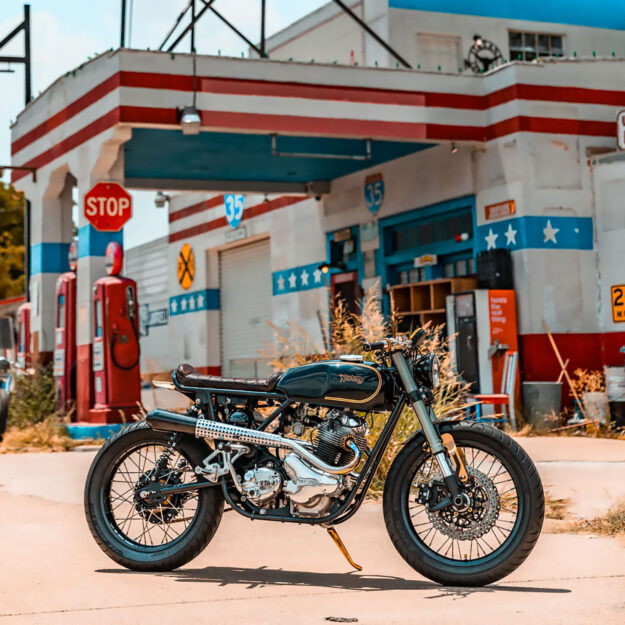 In factory form, they are handsome machines—but some light touches here and there work wonders. An example of those wonders, you can see here. This is a 1973-model Commando, complete with a matching ‘Combat’ engine, built under the ownership of award-winning musician Tim Lopez.

The Norton Combat engine had a rocky start, with owners plagued by constant issues almost as soon as they left the factory floor. However, with proper care and a few choice upgrades, the higher-power engine can be much easier to live with. So the engine was the first thing to get sorted on this project. 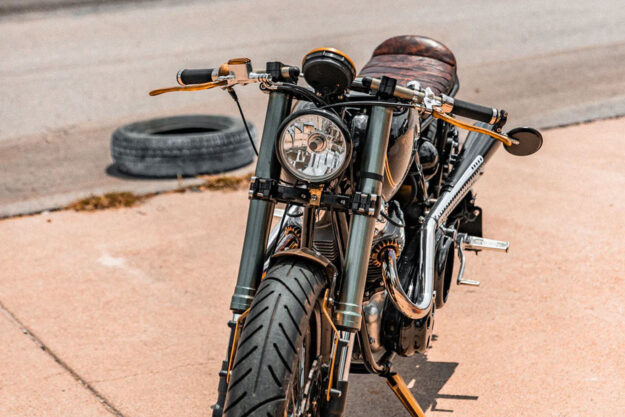 Where better to get that work done, than Colorado Norton Works? They fully rebuilt and modified the engine and gearbox, adding a high-level exhaust from Viking. Up front, Suzuki GSX-R forks replaced the factory units, which look quite spindly by today’s standards.

A new set of black wheels were laced (with the front wheel adapted to the forks), and shod with new Avon tires. They look a few sizes wider than a factory Commando, which makes the bike look more aggressive and modern. Custom fenders were fabricated out of brass, tying in nicely with the overall black and gold theme. 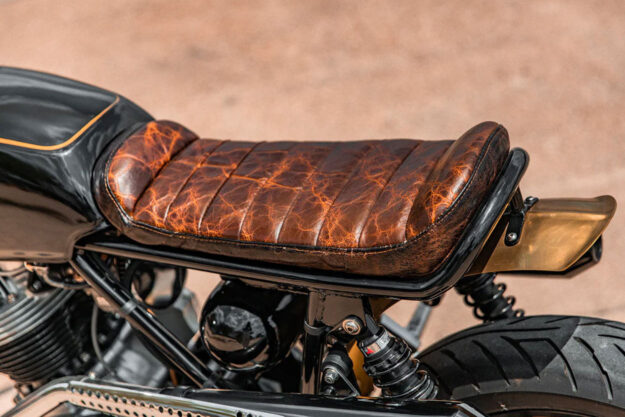 The rear subframe was shortened, looped and topped with a custom leather seat. Commando engines are a dry-sump design, so there’s a custom oil tank under the seat. Beneath that is a set of polished rear-set foot pegs, again from Colorado Norton Works.

Just after Tim ticked over the engine’s 1000-mile break-in period, he decided to move it on. Revival Cycles in Austin, Texas handled the sale—and, understandably, it sold almost instantly. [More] 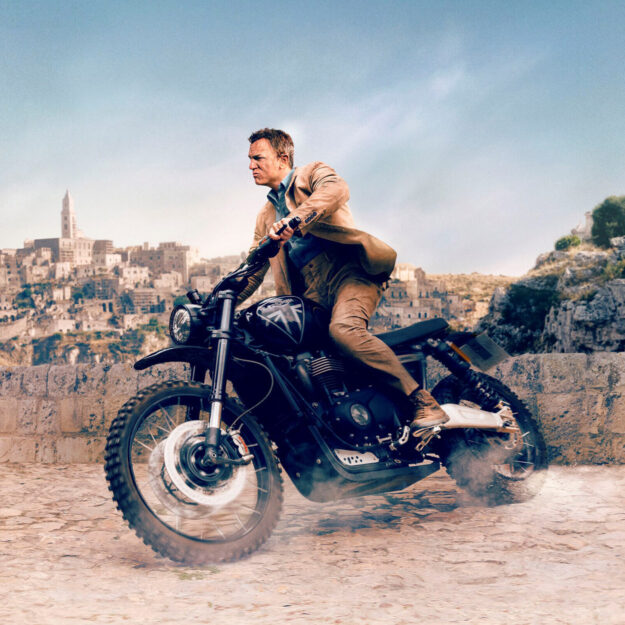 Own a Piece of Bond history With the release of the latest Bond film, No Time to Die, the 007 film franchise teamed up with Triumph Motorcycles for the first time. That it took them so long is a bit Oddjob, since James Bond and Triumph are both as British as the Queen, tea and mushy peas.

The partnership was 59 years in the making, and moviegoers were treated to incredible chase scenes, shot on location in some special spots. The stunt riders expertly piloted Triumph Scrambler 1200s and Tiger 900s through the city streets of Italy and the wilds of Scotland. From all reports, the bikes took everything in their strides, even when riding up stairs and flying through the air (although rumor has it that the biggest jump was actually performed by a KTM dressed as a Triumph, fake rear shocks and all). 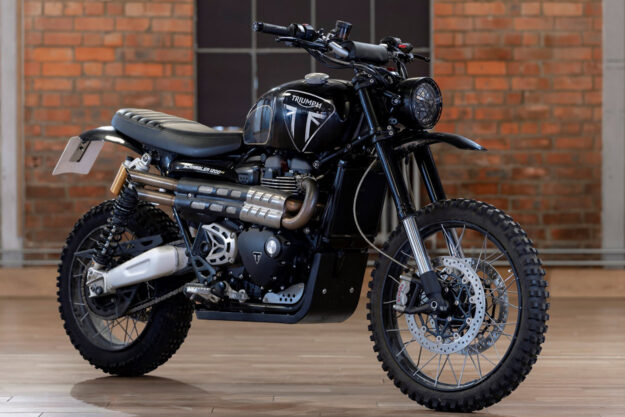 If you would like to own a piece of Bond and Triumph history, we have good news. The custom-built Triumph Scrambler 1200 from the flick will be auctioned in September, as part of a charity auction by Christie’s and EON Productions. Triumph did release special ‘007’ editions of the Scrambler 1200 and Tiger 900 some time ago, but, alas, they sold out quickly.

As a long-time Bond fan, I thoroughly enjoyed No Time to Die (and yes, I cried at the end—I’m not a monster). I don’t have deep enough pockets to make a serious bid on the 1200, but I hope some of our readers do take note. If you’re interested, the pre-sale highlights exhibition will be on public view at Christie’s headquarters in London, from the 15th to 28th September. [More]