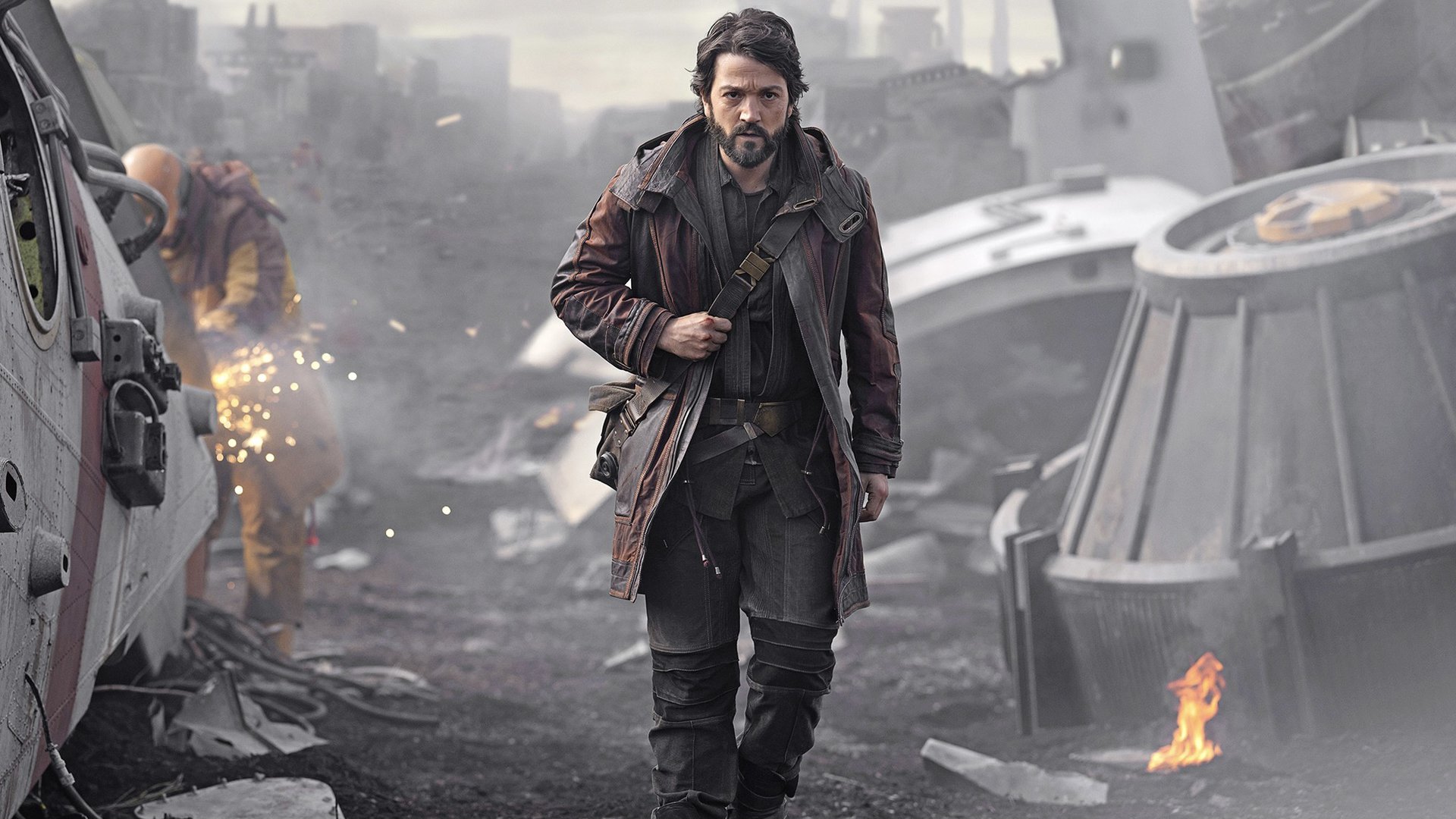 This week, streaming TV show viewers can check out the latest Star Wars live-action series from Disney Plus. They can also watch a docudrama about one of the most horrifying serial killers in history on Netflix, along with a documentary on a crime wave against celebrities. Hulu has a new series about making a fictional TV show revival, and Peacock has an actual TV show revival, along with a great documentary on the rise of conspiracy theories. Let’s look at the best new TV shows to stream this week.

Disney Plus debuts its latest big-budget Star Wars live-action series this week. However, this show is not about mysterious men in Mandalorian armor or Jedi Knights. It takes place between the movies Star Wars Episode III and Rogue One. The galaxy seems to be firmly under the Galactic Empire’s control. However, there are a few pockets of people who want to fight back against the tyranny of the Empire. That includes Cassian Andor (Diego Luna), a person who will soon become part of the growing Rebellion against the Empire. You can check out the first three episodes now, with the other segments of the 12-episode first season to be shown in weekly segments.

Netflix has launched a 10-episode docudrama about one of the most famous, and truly one of the most terrifying serial killers of all time. Evan Peters (WandaVision, Mare of Eastown) plays Jeffrey Dahmer, who was convicted of the murder of 15 men in 1992. The series tells the story through the eyes of Dahmer’s many victims, both alive and dead. The show does not look away from the fact that he not only killed people but dismembered his victims and even performed acts of necrophilia and cannibalism on them. It also shows how the police and justice system failed several times to stop Dahmer when they had the chance to do so.

Netflix is ​​still the leading premium streaming service, with over 200 million worldwide subscribers. It offers thousands of movies and TV shows to binge watch, including its always growing list of original films and series, including Stranger Things, The Witcher, Bridgerton, and many more.

Long before the term “influencer” started, a group of teens decided in 2008 and 2009 to break into the Hollywood houses of celebrities like Paris Hilton, Orlando Bloom, Megan Fox, and others. The main goal was not to get money or expensive clothes or jewelry. These teens just wanted to become as famous as the people they stole from. The crimes soon became known around the world. and now Netflix has a three-part documentary on the subject. It has interviews with many of these now older thieves about their crimes and how the “new” phenomenon of social networks made them as well known as any movie or reality TV star.

Remember Step Right Up? You know, that sort-of funny sitcom from the 1990s that you watched with your family as a kid? No? Well, good, because that show never existed. However, this new (and real) Hulu comedy satires the recent trend of many older TV shows getting revived. In this case, a young writer and fan of the original Step Right Up wants to reunite the original cast members for a new and darker version of the show. The problem is the cast members don’t really get along like their characters in real life. The show stars Rachel Bloom, Paul Reiser, Judy Greer, Johnny Knoxville, and Keegan-Michael Key.

Hulu offers not only thousands of movies and TV shows to stream, it also has original shows and films like The Handmaid’s Tale. You can upgrade to Hulu Plus Live TV to get live channels, including your local stations.

We move on from a show about a fictional TV series revival to an actual show revival. In this case, Peacock will show new episodes of the 2022 version of Quantum Leap the day after they are shown on NBC. If you remember the basic premise of the original 1990s sci-fi series, the reboot is basically the same. Dr. Ben Song (Raymond Lee) enters a particle accelerator in the present day and disappears. However, he then appears in 1985 but not physically; rather, his mind has been transferred to another person in that time period. Another problem is that his own memory has been erased.

With the help of Addison (Caitlin Bassett), a team member from Ben’s present who appears to him in the form of a hologram, Ben learns he has leaped into people to change their lives and make history better. Will this show be worthy of this reboot?

NBCUniversal’s Peacock streaming service offers a lot of great movies and TV shows to stream on demand, along with live news and sports. Best of all, you can watch lots of its content for free, or watch all of it with a paid subscription starting at just $4.99 a month.

Working with The Atlantic, this six-part documentary series on Peacock chronicles the rise of conspiracy theories in the United States. Once considered a fringe movement, conspiracies were thrust into mainstream politics thanks to QAnon and the people who believed the lie about the 2020 US elections being rigged, along with numerous false claims about the Covid-19 outbreak. The series takes a look at the beliefs of people who support these conspiracies and how they could turn into a real threat to the government.

Other shows to check out

There are some other new shows and new seasons of previous shows that are debuting this week:

If you missed last week’s column, here’s a look at our previous week’s picks for the best TV shows to stream.

Hulu’s biggest original series returns for its fifth season. The fourth season of the show, set in the fictional Republic of Gilead that’s ruled by an oppressive theocracy, ended with former handmaid June (Elizabeth Moss) killing her former “commander” Fred Waterford alongside a bunch of other former handmaids. Now June has to face the wrath of the commander’s wife Serena (Yvonne Strahovski) after she turns herself into the murder. But it looks like June’s actions will cause some major repercussions in Gilead. Hulu has already renewed this show for a sixth and final season.

Netflix is ​​bringing back this young adult fantasy series for a second season. The show, based in part on an old animated series on Nickelodeon, will showcase the continuing adventures of Bloom Peters, a fairy raised by humans who is learning about her own powers and abilities in a boarding school in the magical world of Alfea. This season, Bloom and her friends meet some new fairy students and also have to deal with a new villainous threat.

Netflix has yet another anime show based on a video game debuting this week. CD Project Red’s sci-fi game Cyberpunk 2077 is the inspiration behind this show. Set in a future where most humans have at least some cyborg or biomechanical implants, the show centers on a kid who chooses to become an “edgerunner,” a mercenary for hire.

Peacock debuts this young adult series that’s based on the popular Vampire Academy novels by author Richelle Mead. The TV show is all about a special boarding school for vampire elites. One such vampire, Lissa, is protected by a Dhampir, a vampire-human hybrid that’s been trained to be a bodyguard to the elite vampires.

Days of our Lives Season 58 (Peacock)

Days of our Lives was one of the biggest daytime soap operas and ran on the network for decades, telling tales of the fictional town of Salem. This week, NBC’s parent company Comcast decided to move the soap from the network to Peacock. Fans of the series will have to subscribe to the streaming service to continue to watch each episode. The format for the show is not changing; it will continue to release a new episode every weekday (Monday-Friday) at 6 AM ET. While long-time fans might complain, the soap opera will actually have fewer commercials now that it is on Peacock, along with no more threats of any breaking news alerts interrupting the show midway through a major plot point.

Dancing with the Stars Season 31 (Disney Plus — September 19)

Another big network show is switching over to become a streaming exclusive. Disney Plus will be the new home for this reality show, formerly on ABC, where celebs hit the floor with their professional dancing partners to compete for judges’ and audience votes, with one duo winning the Mirrorball trophy at the end of the season. The streaming service will offer each episode live every Monday, starting September 19, beginning at 8 PM ET. Some of the stars that will compete this year include comedian and game show host Wayne Brady, actor Selma Blair, former Charlie’s Angels cast member Cheryl Ladd, and many others.