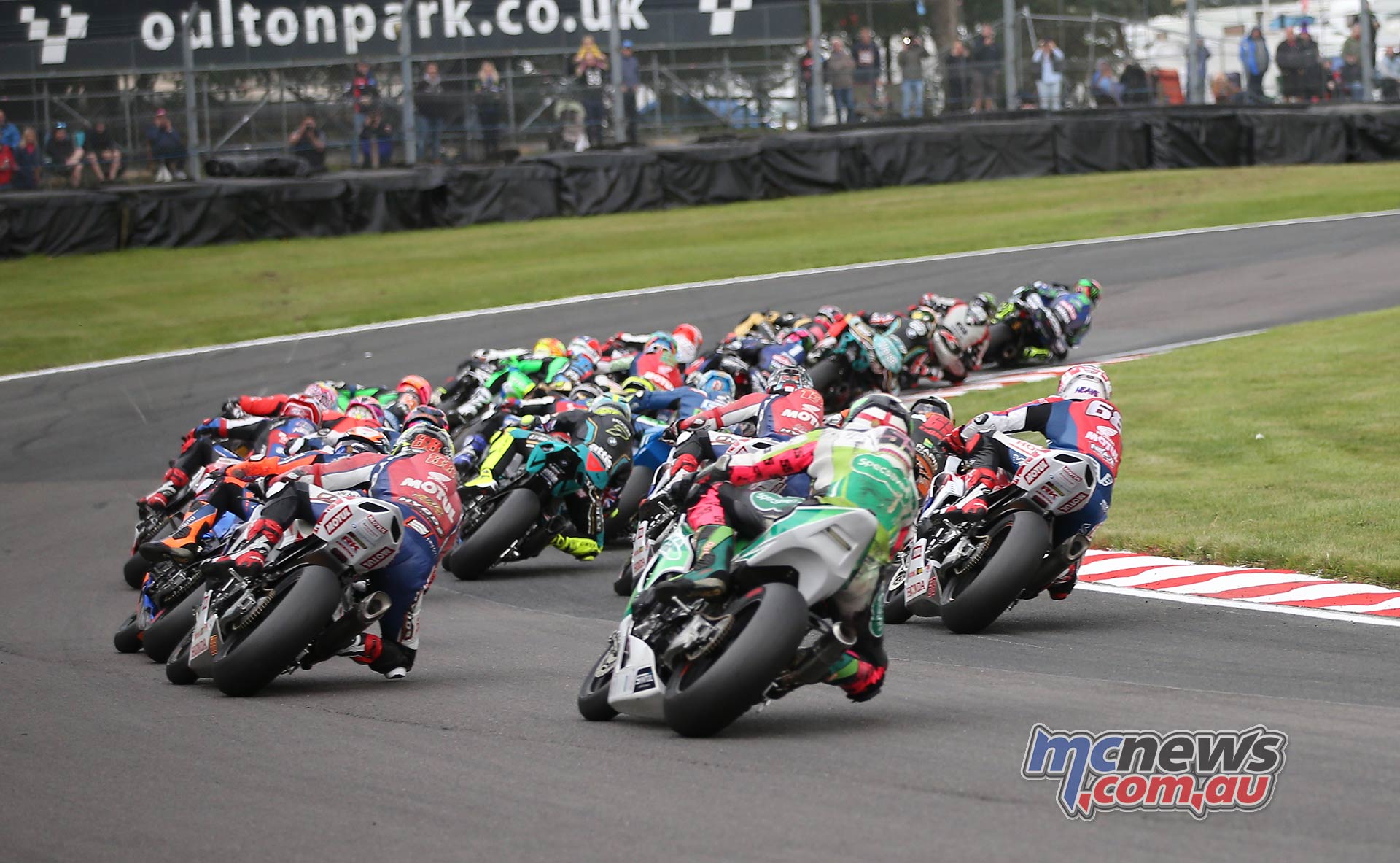 Bradley Ray continued his quest for a debut Bennetts British Superbike Championship title by claiming the opening race win of the Showdown in a dramatic eBay Sprint Race, as both McAMS Yamaha riders crashed out of contention, shaking up the title fight.

Jason O’Halloran had grabbed the lead at the start of the race from Tommy Bridewell, and Ray as the trio got the best launch from the front row.

Bridewell grasped the lead with a move down the inside at Shell Oils corner to move to the front of the pack, but Ray was on the attack. The Rich Energy OMG Racing Yamaha rider made a move on O’Halloran at Druids, and then launched to the lead on the brakes at Lodge.

Ray then was holding off the pack before making a break in the closing stages to claim his eighth win of the season, but Bridewell was able to return to the podium in second place and that saw him surge from eighth to fifth in the overall standings.

It was drama for McAMS Yamaha; reigning champion Tarran Mackenzie crashed out at Shell Oils corner on lap 12. His DNF now moves Glenn Irwin to within two points of the defending champion ahead of tomorrow’s two races.

On the final lap, there was contact between O’Halloran and Peter Hickman as the FHO Racing BMW rider made a move at Druids.

The contact resulted in O’Halloran crashing out of the race, which then promoted Leon Haslam into a podium finish for the VisionTrack Kawasaki team.

Hickman crossed the line in fourth place, but was disqualified from the result for the incident with O’Halloran. That promoted Irwin up to fourth place for Honda Racing UK, ahead of Danny Buchan on the SYNETIQ BMW.

Officials not only disqualified Hickman from the race, but also gave him a three-position grid penalty for race two and recorded two penalty points against his licence.

Lee Jackson battled his way back through the pack to finish sixth on the Cheshire Mouldings FS-3 Kawasaki, with Christian Iddon in seventh for Buildbase Suzuki.

“Qualifying went well but the lap times we were doing were wearing out the tyre after six laps, so we softened the suspension and power for the race in order to extend the tyre life in the 14-lap race. The consequence was that we lost quite a bit of pace and it might have been better to leave the set-up as it was, lap at a strong pace in the first six laps and then hang on as best we could in the second half. The conservative option we took didn’t work out but we’re trying to adapt all the time and maybe focusing on our speed is the way forward tomorrow. They’re longer races so we’re going to have a good think overnight about what our best strategy should be.”

“I’m disappointed, we’ve worked all year for this and someone that’s not even in it has just absolutely cleaned me out. I didn’t see him, I didn’t hear him I just got hit really hard into Druids. Physically I’m alright, the bike is bent in half so the boys have got a big job on tonight. I’m gutted, I was lining Tommy up for a pass into the last turn, it should have been 20 points for us and now we are a pretty big chunk behind. I’ve worked my balls off all year for this and I’ve been taken out just like that. I felt like I was riding really well, we did a couple of 1’33s in the race which I was really happy about and I had the pace to match Tommy, Brad had a bit more but I definitely had enough for second so I’m sure we’ll be in the fight tomorrow.”

“I got a really good start but got boxed in at turn one so I had to pick people off. I came through right to Leon and was in fifth place and was chipping away, making in roads on the guys in front. I was pushing hard and just as I got really good drive out of Island so went into Shell that little bit faster and it was just too fast, I commit a lot into Shell as we can on the Yamaha given the camber but just as I turned in the front locked and I went down. It’s unfortunate as I felt I had good pace and if I had had a better first lap I think I could have been with the podium battle. For me, I didn’t really know where my pace was at so I now have good confidence for tomorrow, starting on the second row if we can go with the guys at the front we can claw some points back.”

Bradley Ray set the fastest ever lap of Oulton Park by 0.672s to claim pole position on his Rich Energy OMG Racing Yamaha.  Ray set his sensational flying lap towards the beginning of Q2 and then his rivals were pushing to close the deficit.

Tommy Bridewell was the closest as the Oxford Products Racing Ducati rider posted the second fastest time of the session, 0.796s adrift of Ray ahead of him.

Jason O’Halloran had a last lap flier that put him up the order into third to complete the front row for McAMS Yamaha, with Peter Hickman on the FHO Racing BMW splitting the teammates to head the second row.

Tarran Mackenzie had a surge into fifth in the closing stages of Q2, just ahead of Leon Haslam who completes the second row of the grid for the eBay Sprint Race.

Lee Jackson and Kyle Ryde completed row four of the grid ahead of Saturday afternoon’s opening race of the Showdown while Josh Brookes headed row five.

Davey Todd boosted his championship lead as he beat Charlie Nesbitt to the opening win by 0.187.

Next home was Dan Linfoot in sixth by a couple of bike lengths over Brayden Elliott who crossed the line in seventh.

Bradley Perie took the Sprint race win by 3.423secs over team-mate Harry Truelove as newly re-crowned champ Jack Kennedy crashed out from the lead on the last lap.

Mar-Train Racing’s Kennedy had looked on course for yet another win until his crash, and instead it was the Appleyard

The GP2 battle took a different turn as Jack Scott – who had been challenging for the lead early on – crashed out several laps in and the class win went to Harvey Claridge.

Jake Archer was the second GP2 rider home, just ahead of Jake Archer.

Max Cook moved a step closer to the title as he beat Franco Bourne to the win in the opening race.

Despite dropping back to second behind Bourne at the start, the polesitter was back in front by the end of lap two and was never challenged again as he powered to the win.

Third was Seth Crump, ahead of Dan Brooks as Aaron Silvester took fifth.