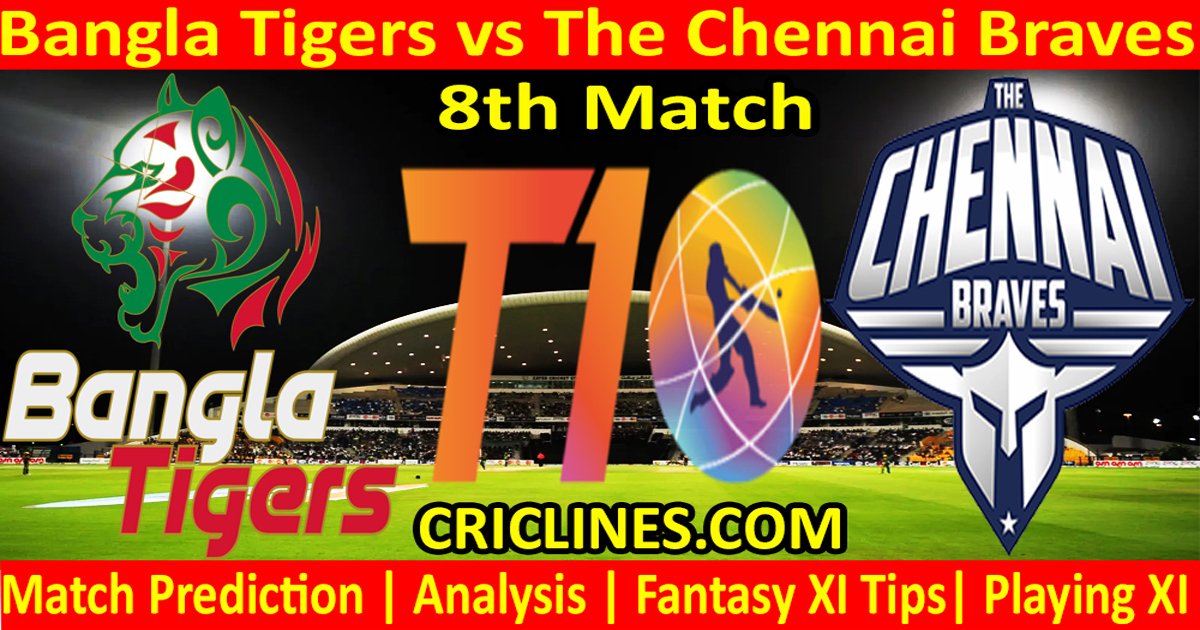 Bangla Tigers had played a total of two matches with one win and one loss. They won one of their matches against the New York Strikers by an impressive margin of 19 runs but lost the very next match against the Morrisville Samp Army by a margin of 15 runs.

Chennai Braves made changes in their team for this season of Abu Dhabi T10 League and they failed to make a good start in this tournament. They lost their first match against New York Strikers by a margin of 27 runs. Now they are going to face a strong team Bangla Tigers.

The bowling unit of Bangla Tigers did well in the previous match as they won the toss and decided to field first. He looted only 100 runs in 10 overs. Benny Howell was the highest wicket-taker for their side, taking two wickets for just 17 runs in two overs. Mathisha Pathirana was the other bowler who performed well and took a wicket. He took one wicket for just 10 runs in two overs. Umair Ali was the other bowler who took a wicket but conceded a lot of runs. He gave 19 runs in just one over.

Rohan Mustafa and skipper Shakib Al Hasan were the bowlers who could not take any wickets. Bangla Tigers lost the previous match due to the worst performance of their batting line-up. They failed to chase down the target of 101 runs and scored just 83 runs. Hazratullah Zazai was the top run-scorer for his side, scoring 35 runs off 26 balls with the help of three fours and two big sixes. Evin Lewis scored 14 while Colin Munro remained unbeaten on 12. We have no doubt that Bangla Tigers are a strong and experienced team and we are sure that they will do well in the remaining matches as well.

Chennai Braves completely failed to give their best performance in their very first match of Abu Dhabi T10 League 2022. They won the toss and decided to field first. The performance of their bowling unit was good. He looted 99 runs in 10 overs. James Fuller was the most successful and highest wicket-taker for their side, taking three wickets for just 15 runs in two overs. Sikandar Raza also did well, taking one wicket for 12 runs in two overs. Patrick Dooley also did well, taking one wicket in two overs while conceding 16 runs. Henry Brooks was the other bowler who took a wicket but conceded a lot of runs. He looted 34 runs in two overs.

C Brathwaite was the only bowler from their side who could not take any wicket in the last match. Chennai Braves’ batting line-up completely failed to deliver the best performance in the last match. Chasing the target of 100 runs, they could score only 72 runs in ten overs. Only two batsmen from their side could enter in double figures. Carlos Brathwaite was the most successful and highest run scorer from his side who scored 22 runs in 14 balls with the help of two big sixes. Vritya Aravind was the other batsman who got some runs on the board. He remained not out after scoring 18 runs in just eight balls. He hit two fours and a six during his innings. Dawid Malan failed to open the account on the scoreboard while Adam Rossington scored just two runs.

Chances of winning today’s match for both the teams

Toss is going to play an important role in the result of every match of T10 league. As per our toss predictions, the team Who will win The toss will elect to bat first as the pitch behavior will be similar during both the innings.

The 8th match of T10 League is going to be played at Sheikh Zayed Stadium in Abu Dhabi. This venue has some of the flattest and completely dead tracks we’ve seen in the past. We are expecting slow, flat and good batting for this match. A score of more than 120 runs should be a par score.

The weather forecast for Abu Dhabi is almost perfect for this cricket match. There is no chance of rain and we will have a full match to enjoy.

Hazratullah Zazai, Carlos Brathwaite and James Fuller are the key players to watch in this match.

Dream11 Team Prediction for Bangla Tigers vs The Chennai Braves 8th Match T10 League. After checking the latest player availability, which players will be a part of both the teams, and the possible strategy that both the teams can use, as we have gathered the Dream11 team from the previous season of Abu Dhabi T10 League to make the best possible one had learned.

will be posted soon

We had provided you the above T10 Prediction based on our research, understanding and analysis. These prediction tips are also based on the reports that we have from our various sources. You can consider the point which we provided to you and the decision will be yours which you have to do at your own risk.