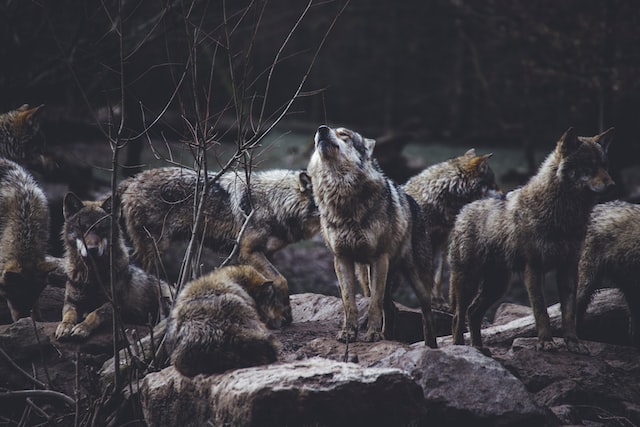 Many canines are natural when it comes to displaying affection to people. On September 20th, the journal Ecology and Evolution stated that wolves had the amazing ability to demonstrate attachment behavior toward human carers.

Wolves can show attachment toward humans

Researchers at Stockholm University in Sweden assessed 10 wolves and 12 dogs in a behavioral test created particularly to quantify attachment behaviors in canids, as per ScienceDaily,

During this test, 23-week-old wolves distinguished between a familiar person and a stranger just as well as dogs did, and the familiar individual exhibited higher proximity seeking and affiliative behaviors.

Furthermore, the presence of a known human served as a social stress buffer for the wolves, calming them down in a stressful environment.

These findings add to a growing body of data that contradicts the theory that the capacities required for dogs to develop attachments with people evolved only when humans tamed them at least 15,000 years ago.

Dr. Christina Hansen Wheat, Ph.D. in Ethology from Stockholm University in Sweden, states, “We believed there was a need to properly verify this.”

In light of previous research that has made significant contributions to this question, I believe it is now appropriate to consider the possibility that, if variation in human-directed attachment behavior exists in wolves, this behavior could have been a potential target for early selective pressures exerted during dog domestication.

Dr. Hansen Wheat is curious about how domestication impacts behavior. To investigate this, she and her colleagues bred wolf and dog puppies from the age of 10 days and subjected them to a variety of behavioral tests.

In one of those tests, a familiar person and a stranger alternate entering and exiting a test room to create an unusual and uncomfortable scenario for the animal.

The test, which was initially designed to examine attachment in human newborns, is based on the notion that by creating an unstable environment, attachment behaviors such as closeness seeking will be encouraged.

In essence, the researchers wanted to see if the wolves and canines could tell the difference between a familiar person and a stranger in this Strange Situation Test.

That example, did they express more affection and spend more time greeting and interacting with the known individual than with the stranger?

If wolves and dogs behaved similarly, it would indicate that this skill is not unique to dogs, implying that it did not evolve exclusively in dogs.

“That’s precisely what we saw,” Dr. Hansen Wheat explains. It was evident that the wolves, like the dogs, favored the familiar over the unfamiliar.

What was probably more intriguing was that, while the dogs were unaffected by the test circumstance, the wolves were.

Dr. Hansen Wheat adds that the parallels between dogs and wolves might help us understand where our canines’ behavior comes from.

While it may come as a surprise to some that wolves can interact with people in this way, she thinks it makes sense in retrospect.

Separation anxiety does not always have a precise reason, although various dog histories are associated with this issue, as per Wolf Center,

These can include having previously been abandoned, a scheduled shift (such as working from home and then returning to the office), changing residences, or simply someone in the family unexpectedly being away (from something like moving or death).

Dogs may exhibit actions immediately after their human departs or even as their owner prepares to go.

There are numerous approaches to dealing with your dog’s separation anxiety. Depending on how serious their ailment is, it may be a lengthy procedure.

The ultimate objective of treating separation anxiety is to educate your dog on how to be alone effectively and without distress.

One way is counterconditioning. This can be used on stressed pets before or after you leave the house.

For dogs who become apprehensive before you leave because they recognize that putting on your coat implies you’re leaving, training entails performing these behaviors and then not leaving the house.

This helps to remove the link between those activities and your departure, reducing your dog’s fear.

Another option is to give your dog a favorite reward just when you leave the house. This might be a puzzling toy or a favorite dessert.

It’s vital to only give this to them after you leave so they can relate the treat to your absence.